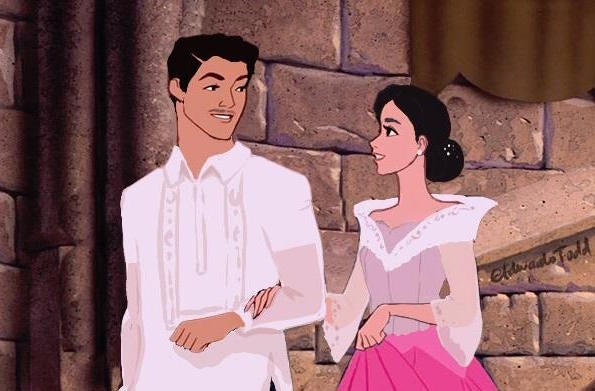 Disney princesses are icons for children the world over, and boast ethnicities that span North America, Europe, West Asia, East Asia and Polynesia.

A Filipino artist, recognizing their impact, thought to give the likes of Pocahontas, Princess Jasmine and Belle a local touch.

“I chose to make them Pinoy because I feel like our people are greatly underrepresented, especially in the Disney movies, as we Pinoys now have a much bigger role worldwide,” Edward Neibart III related to ABS-CBN News.

Mulan donned a gender-bent outfit as a Katipunero:

Princess Jasmine looked perfect in a turquoise hijab with a matching gown:

Pocahontas was recreated as an Ifugao from Northern Luzon with beads and a tattoo:

A commenter politely mentioned that the depiction of the Ifugao was inaccurate, stating that their jewelry is usually colorful, blue isn’t used in their patterns, and Ifugaos rarely had tattoos.

In a friendly exchange, the artist shared that his references were from the Internet, to which the commenter pointed out that different tribes tended to be mixed up because of lack of information.

Most comments were if not positive, constructive, and raised discussions on cultural representation. Another commenter also pointed out that Filipino culture already has several historical and fictional women to be celebrated.

Neibart agreed, and expressed that he would still like to see a Filipina Disney princess, such as the mythical Maria Makiling. JB

What Would Your Favorite Disney Princess Look Like In Givenchy?