When the art of beauty serves a higher purpose | Inquirer Lifestyle ❮ ❯ 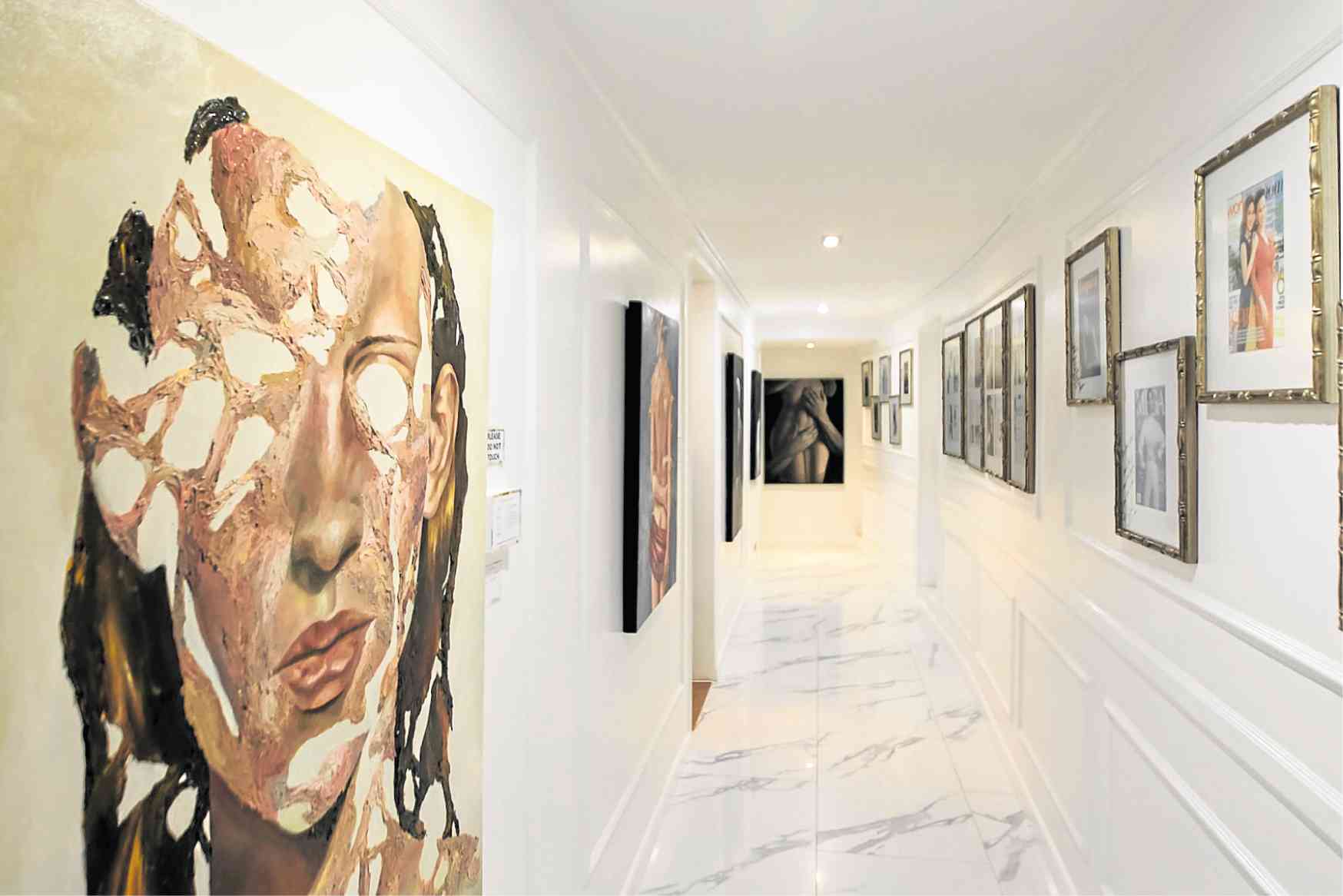 Artworks by various artists—like this oil on canvas by Dinno Zaide, “Cocoon” (left)—lined the sterile whitewalls of the just-renovated Aivee Clinic at The Fort on reopening day. The paintings were sold to benefit the clinic owners’ foundation, Beauty Beyond Borders. —LEO M. SABANGAN II

When the art of beauty serves a higher purpose

People would have been justified in thinking they just walked into the unveiling of an art gallery, instead of an aesthetics and dermatology clinic.

When Doctors Z and Aivee Teo reopened their just-renovated flagship clinic at The Fort, BGC, recently, guests walked through its long corridor of sterile white walls lined with 21 artworks by various artists.

The Teos are avid art collectors, so adorning their clinic’s walls with art shouldn’t be a surprise. Their year-old A Institute nearby, after all, has a permanent display of remarkable artworks, conversation pieces with themes inspired by their line of work, created by Filipino artists.

At the reopened clinic, however, the artworks were only on temporary display. As in an art gallery, each work bore a card with all pertinent info—the artist’s name, the work’s title, the medium and the price. They were for sale.

The Teos are among the eminent names in the country’s aesthetics industry, and they consider their job to be an art form in itself. “Art and what we do at Aivee Clinic are related, and we feel like we’re also artists in a way—we shape, mold people’s bodies—so, we thought, why not do something that combines the two for the clinic’s unveiling?” Dr. Aivee Teo said.

Her Singaporean husband, Dr. Z Teo, the Aivee Group’s CEO, tapped two of his favored galleries, Provenance and J Studios, to commission their crop of emerging artists for works inspired by the theme “Beauty Beyond Borders.”

To mark the reopening of their flagship clinic, the Teos have set up a foundation called Beauty Beyond Borders, which aims to support their medical missions. Part of the proceeds from the sale of the artworks will go to the foundation.

“We don’t see big proceeds, but it can be a start,” Dr. Aivee said. “We’ve been doing medical missions, but we want to take that to the next level, to involve more doctors and make the missions more regular.”

Dr. Aivee, whose mother, Mel Aguilar, is mayor of Las Piñas, has been doing most of the medical missions in that municipality, “but we don’t want to limit ourselves, and we want to reach out to more communities,” she said, adding that other local governments only need to get in touch with them.

Most medical missions, the couple said, focus on typical chronic illnesses like cough and colds, and common infections, but there are none that take on dermatological concerns. “When we go to the barangays, we see that there’s a big need, because even severe acne is debilitating,” Dr. Aivee, a dermatologist, said.

For the poor communities, such concerns are not a priority, since they don’t have the resources to address these concerns, the couple notes.

“But these are not just skin problems because their whole being is affected. When your face is riddled with acne, there’s the psychological effect,” Dr. Aivee said. “We get private messages in Instagram. People say they want to come to us but they can’t afford us. Our thought is, if you can’t come to us, we can go to you in our own capacity.”

In past medical missions, the Teos have also dealt with cases of psoriasis, leprosy, scabies, even skin cancer.

“That’s why, even as we want so much to keep the paintings for ourselves, we have patients here who have already expressed interest in the pieces,” she said. Before the opening, some of the paintings were already reserved.

Through the years, as they opened other clinics, their flagship location has become “like a poor cousin” to the newer locations, especially compared to their state-of-the-art A Institute surgical clinic and lifestyle center in the same neighborhood.

The revamped Aivee Clinic at The Fort was designed by Singaporean Malcolm Chua, who is also the interior designer of their other clinics. All consultation rooms have been turned into plush private suites, decorated in a distinctly feminine style.

Dr. Aivee herself has given up her big office in favor of an Aivee Café, with a kitchen in the far end of the clinic, where the surgery rooms used to be. (All surgical procedures are now done at A Institute.)

“Our patients have been comparing, and they’ve been ordering food from the café in A Institute, so we felt it was high time we gave this a nice facelift,” Dr. Aivee said.

The revamp has made room for more suites, where, apart from laser treatments, they offer luxury facials and body scrubs unavailable in the other locations. There are private areas that can be transformed for intimate gatherings, like bridal showers and the like.

The clinic’s rates remain the same, unaffected by the facelift, its owners noted.

“We don’t intend to increase our rates just because we renovated,” said Dr. Aivee. “We sincerely just want our patients to be comfortable, to have a place where they can relax and pamper themselves, have a good time, and have an Aivee experience. Our investment is long-term. We’re doctors first, business people second.”