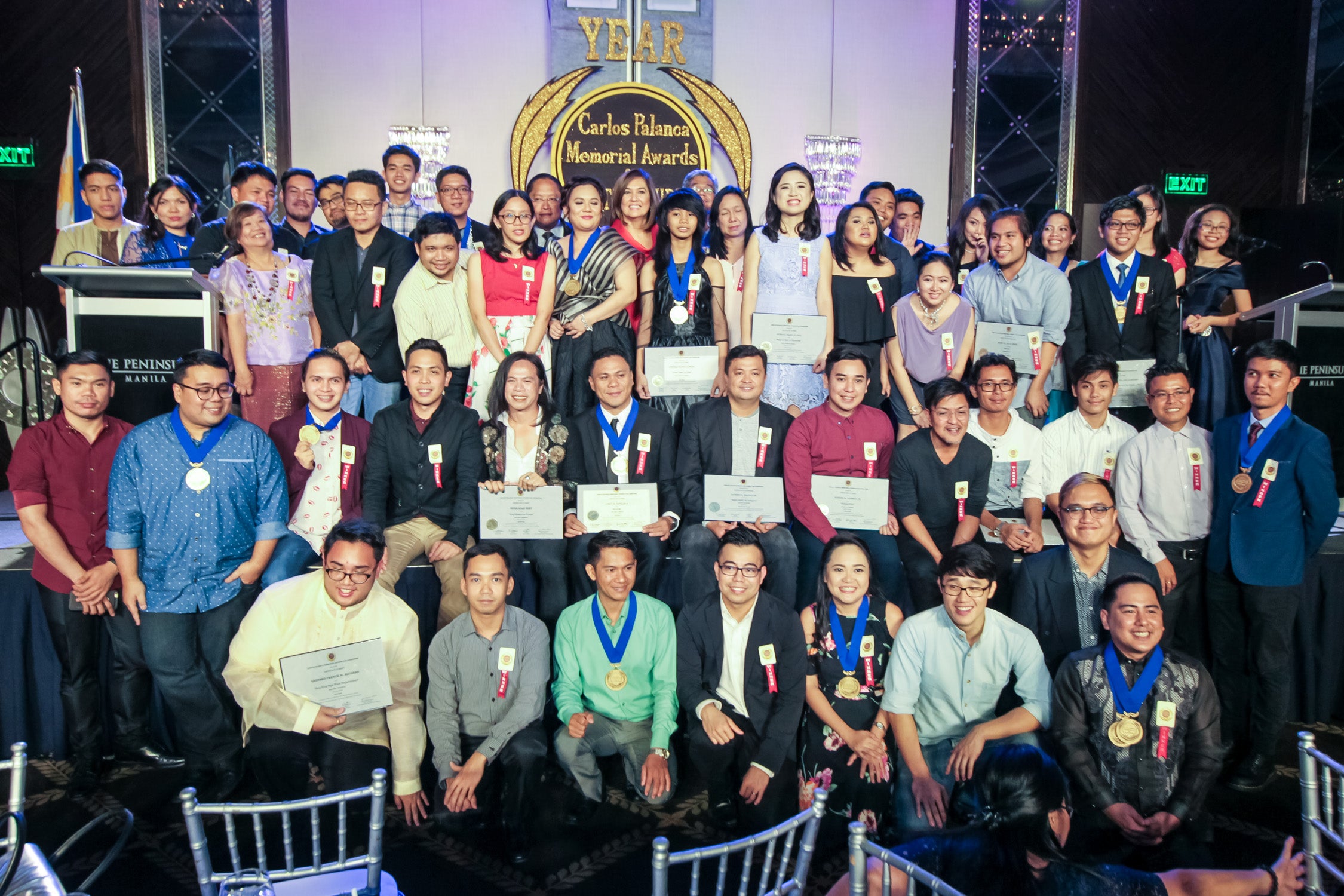 The winners of the 67th Palanca Awards —PHOTOS BY LEO M. SABANGAN II

Sept. 1 is the yearly talismanic opportunity to bear witness to the continuing evolution of Philippine literature.

This, of course, is the sacred day of the awards ceremony for the Carlos Palanca Memorial Awards for Literature, long the required distinction as well as the longed-for reward for Filipino writers then and now. The award itself is equal parts confirmation, redemption and inspiration.

This year is already the Palanca Awards’ 67th year, and the country’s literati faithfully trooped to the Rigodon Ballroom of the Manila Peninsula to take part in the annual rites.

It is always symbolic: past winners and other established writers gathering to celebrate the arrival of powerful new talents.This year’s guest of honor was much-awarded writer José “Butch” Dalisay Jr. The Palanca Hall of Fame member, University of the Philippines professor and versatile wordsmith who can write virtually anything well—a literal literary five-tool man—described himself as “a journalist beholden to the facts before being liberated by fiction,” before telling the gathered winners: “You’ll never forget this evening.”

In a heartfelt, funny and insightful speech, Dalisay spoke about what winning the Palanca should mean to the winners: “The quick and correct response, of course, is to say that a Palanca award will bring you honor, some fame—certainly bragging rights for your proud mama and papa—and even some money.”

It should ultimately lead to an eventful life doing more good writing: “That, I think, will be your greatest victory, the realization that these awards are but an enabler, a handmaiden of books that will be validated no longer by a panel of three judges but by a readership of thousands.”

Dalisay recalled his first Palanca award, a tie for Short Story in English in 1975. He was 18. He said he spent the cash prize on his first car, a yellow Datsun Bluebird which wound up having an eventful life of its own.

Dalisay went through the fascinating circumstances of his writing life—notably writing remarks essentially congratulating himself as delivered by President Fidel V. Ramos at one awards occasion.

He reminded the writers: “The best antidote to fake news is true fiction.”

Speaking on behalf of the Palanca family, Criselda “Dang” Cecilio-Palanca recalled the Palanca Awards’ history and  revealed some statistics for this years’ awards.

There were 55 winning works by 51 authors chosen from 954 entries in 22 categories. Of these, 23 were first-time winners and 28 were repeat Palanca Awardees.

In total, there are now 2,385 winning works representing 2,303 winning authors since the Palanca Awards’ inception in 1951.

“Would the literature we produce now be relevant and meaningful to people who live in a different milieu?” Cecilio-Palanca asked. “May your works be shafts of light in the darkness of our times.”

An excerpt of Joachim Emilio B. Antonio’s “exesanonymous.com,” the 2nd Prize winner from Full-length Play, was performed under the direction of  Alex Cortez.

It was certainly a huge win for Noelle Leslie dela Cruz, who took 1st Prize in Poetry in English with her collection, “Sisyphus on the Penrose Stairs Meta-Reveries.”

Dela Cruz, who teaches philosophy at De La Salle University, had been joining for several years before her breakthrough. The 2008 Silliman fellow holds an MFA from DLSU. She said of her collection: “Many of the poems here have a philosophical theme because of my background.” The title combines the myth of Sisyphus and the optical illusion of never-ending stairs.

Another big first-time winner was Glenn L. Diaz, who won the prestigious biannual Grand Prize for Novel, for “The Quiet Ones.” It was also his first Palanca award.

The novel began as a collection of short stories when Diaz was working on his Master’s at UP. “My MA thesis was a collection of stories and I reworked them into something resembling a novel,” he recalled. “It resets the call center industry in the context of Philippine colonial history. I wanted it to be a sort of contemporary history.” It’s a good year for Diaz, who teaches English at Ateneo de Manila University, as “The Quiet Ones” is set to be released by Ateneo de Manila University Press later this year. The novel was actually accepted for publication even before it won the Palanca.

“I’ve joined it a couple of times, which is a rite of passage for many young writers,” Diaz said of the Palanca Awards, adding he was quite happy to have won.

Paul Gideon D. Lasco won the 2nd Prize in Essay in English for “The Art of Hugot in our Republic of Sawi.” It is his first time to both join and win the Palanca.

“Hugot is very popular now and I tried to relate it to our nation itself and how our country has always been sawi in a sense. In our history, there’s always been a sense of loss for our nation. We have all this hope, but they never get fulfilled. I argue that the sense of being sawi makes us stronger. It doesn’t diminish us and instead makes us better as a nation.”

A medical doctor and anthropologist, Lasco writes the column “Second Opinion” for the Inquirer’s Opinion section.

Aside from Lasco, winners with Inquirer connections included Young Blood contributors Jade Mark B. Capiñanes and Patricia Celina A. Ngo.

The 1st Prize winner for Poetry in Filipino, Christian R. Vallez, is a third-time winner. According to Vallez, who teaches at University of Asia & the Pacific and runs his own storytelling company Overmind, the poems in “Sa Pagitan ng Banal at Karnal” are his “attempt juxtaposing what is holy and what is carnal, as the title says. As Catholics, Filipinos have a natural aversion to stacking the two together. In fact, through the poetry, I was hoping to show the holiness in carnal things and, at the same time, the carnal in holy things to remind us we were dual in nature.”

Eros S. Atalia has seen his best-selling, award-winning novels turned into films (notably 2011’s “Ligo Na U, Lapit Na Me”), but winning the Grand Prize for Nobela with “Ang Ikatlong Anti-Kristo,” his third Palanca award and second for Nobela, remained of utmost significance. The novel is about a priest who has a charming personality and a big following. “But he doesn’t know he is the third Anti-Christ,” Atalia explained.

It took him eight months to complete it, with the first five chapters done during his residency at the hallowed Iowa Writers Workshop. He finished it upon returning to the Philippines.

“It’s a big challenge to win the second time, to write again a novel that is worth reading by fellow Filipinos,” he said in Filipino.  “It’s validation. The Palanca is a respected institution that gives writers recognition. What the Palanca Awards does is very important, because it gives common people access to literature that isn’t just for the classroom, not just for textbooks but literature you can find on the very corners of the streets.”

After winning his first Palanca award, Lasco said he planned to join the Palanca Awards contest again: “I encourage everyone [to join]. We need to support literature in our country.”

“It’s so important,” Dela Cruz said of the prize. “I’ve dreamt of this since I was a kid. And when it finally happened, I couldn’t believe it. The next day, I wondered if I was dreaming. I still can’t believe it. It’s an affirmation that you’re doing the right thing.”

Vallez said: “It’s not so much for prestige or winning but the exercise that you have something to join each year, so you have the discipline that you are forced to finish a collection or a piece of art each year. For us workers in the creative industry, the Palancas always push us to keep producing.”

After all, Dalisay concluded his speech by reminding the audience that, in an age of diffused definitions, the Palanca Awards means something: “You and I have much to write about. You will not even need to wait until the next Palanca deadline to do what only you can do, and to say what only you can say. If you write for truth, reason and justice, and for the beauty and value of life itself, you will always be a 1st Prize winner in my book.”