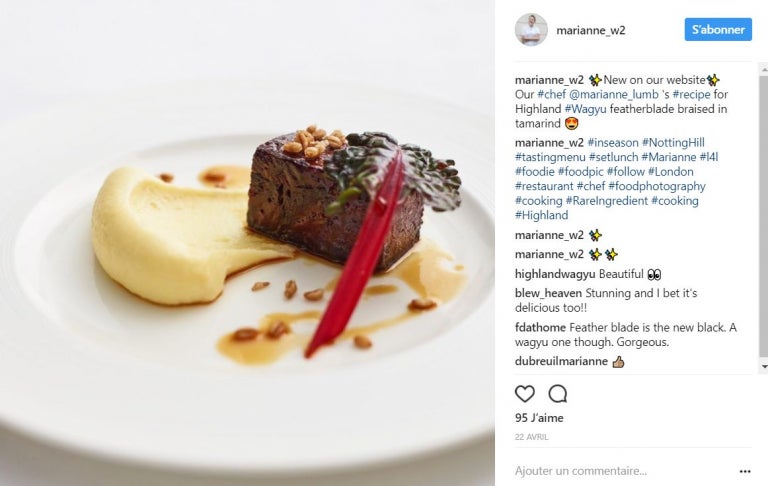 For the “top gastronomic experience” in London, visitors and locals alike are advised to book a table at Marianne, a small, intimate restaurant helmed by a former “MasterChef” contestant, which took the top award at the Harden’s London Restaurant Awards 2017.

On Monday night, some of the city’s most influential chefs and tastemakers gathered at The Hippodrome Casino in Leicester Square to hear which restaurant would be proclaimed top newcomer, top bar or pub, and most romantic dining destination in London.

Taking the biggest award of the evening was chef Marianne Lumb for her Notting Hill restaurant Marianne, where diners sit down to cooking of “peerless perfection.”

An alumni of the 2009 edition of “MasterChef the Professionals” in the United Kingdom, Lumb opened her eponymously named restaurant in 2013, under a culinary ethos that favors local, seasonal ingredients.

If you want to book a table, though, best be quick, as the restaurant is a small, intimate affair that seats just 14 diners.

For this year’s awards, 8,500 people contributed 50,000 nominations. The final selection from the shortlist was made by Harden’s editors.

London visitors looking to book the quintessentially British experience of afternoon tea may want to book a table at The Berkeley Hotel’s Collins Rooms, which took the title of London’s Best Afternoon Tea spot.

The tea room is particularly popular among fashionistas for its “Pret-à-Portea” service, where cookies and cakes are designed after the latest catwalk trends.

For diners with discerning taste buds and tighter budgets, Thai eatery Kiln in Soho was named best cheap eats, for its “palate-searing” fare, while Borough Market’s Kappacasein took the title of best street food for their cheesy raclette.

Here are the winners of Harden’s 2017 London Restaurant Awards 2017:

You can now go “bingsu and chill” at Snowbing, the newest Korean dessert café!