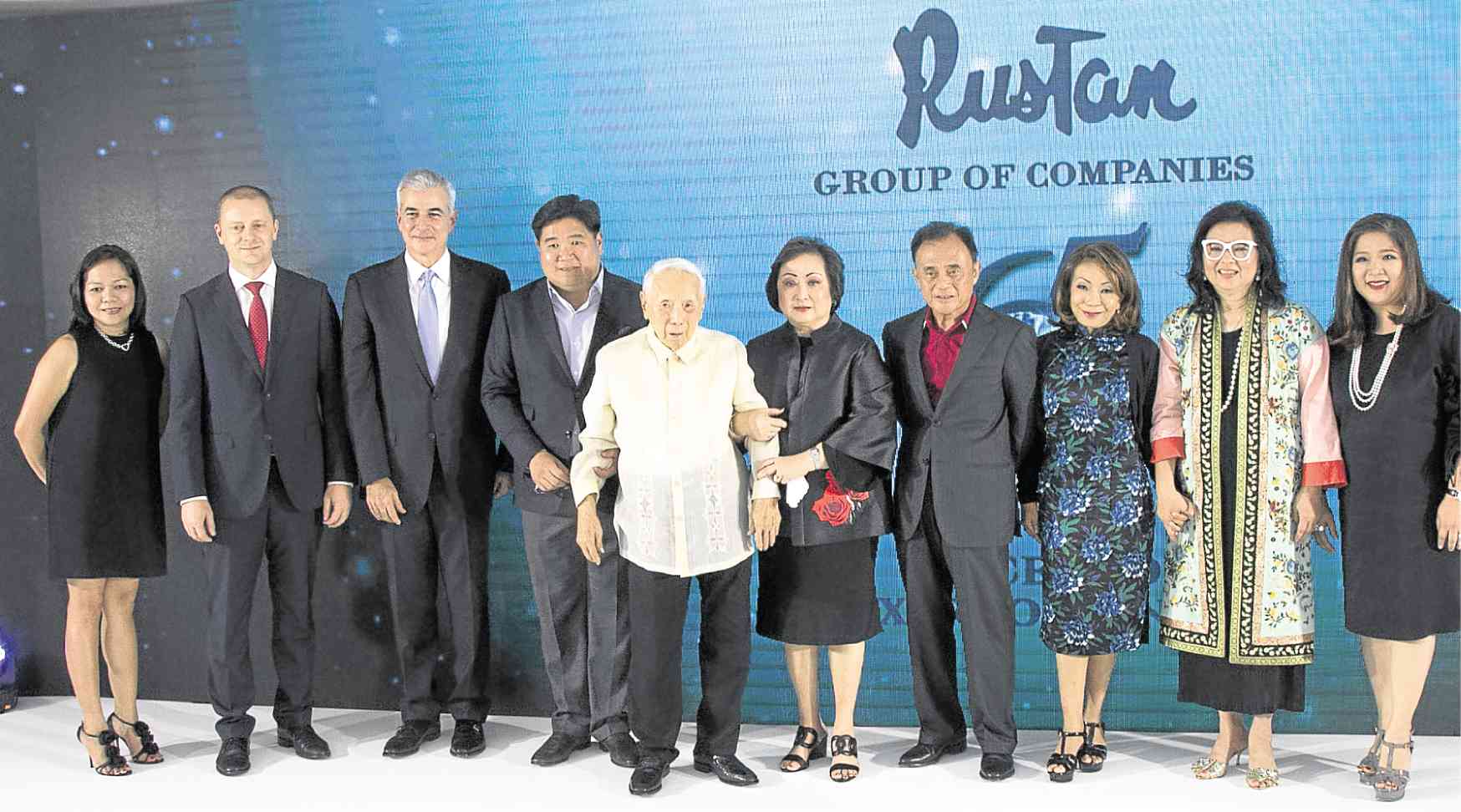 From Paco to the apex of luxury retail: Rustan’s marks 65th year

In welcoming guests to the well-attended 65th anniversary party of Rustan’s Thursday night, chair and CEO Zenaida Tantoco joked that she was tempted to toss her script after hearing recollections about the store from longtime friends—patrons since the store’s humble beginnings in San Marcelino in old Manila.

One such patron, Lorna Laurel, wife of the late Sen. Sotero Laurel II, even handed Tantoco a letter recalling the early years of Rustan’s.

“Today as Rustan’s celebrates its 65th anniversary, we celebrate a retail journey that started in downtown Manila over six decades ago, and finally manifested itself through the passion and drive of its founding partners, my mother and father, who upscaled the Makati Commercial Center, where we have all gathered today,” Tantoco said in her welcome remarks.

Tantoco paid homage to her late mother, Gliceria Rustia Tantoco, who cofounded Rustan’s with husband Bienvenido Tantoco Sr. The former ambassador, 96, sat in the audience with his other children—Rico, Menchu Lopez, Marilen and Maritess Enriquez—grandchildren, and great-grandchildren. (Daughter Marilou Pineda is out of the country.)

Rustan’s is a portmanteau of the founders’ family names.

“Rustan’s is a story that’s not about just a store,” Tantoco said. “It’s the story of a strong-hearted woman who had a God-given gift, which she used fully to pursue her dreams for the Filipina, whom she believed had every right to be tastefully dressed by only the finest and most coveted names in style, and whose homes should be impeccably furnished by the best the world has to offer.”

She added, “It is the story of a woman who forged with confidence into the world of international luxury retailing with boldness of vision, impeccable taste, timeless vigor and a deep love for her family, God and country. That woman was our dear mother, Glecy, with the unstinting support of her husband Benny, to whom she credited her success. This couple has given an extraordinary legacy to her family, of which we are so proud.”

Of her father, she said, “Perhaps he’s thinking back modestly but proudly to what he and my mother Glecy jointly achieved to create the retail entity synonymously rooted in the Philippines and its inherent culture.”

The luxury retail leader in the Philippines had its start in the Tantocos’ living room in San Marcelino in 1952, where the couple would display the beautiful objects they brought home from their travels. Manila’s socialites would troop to this little shopping destination in Paco, for unique finds found nowhere else in the country at the time.

In the 1960s, Rustan’s would begin to do business with revered European houses like YSL and Dior. The Tantocos opened the Makati flagship store in 1970, the same year they signed the exclusive distributorship of Lacoste.

The Rustan’s brand would become synonymous not only with foremost global brands but also with exceptional service and customer care.

In the years to come, as the Rustan’s Department Store opened in other locations, it branched out to other retail arms, to include Rustan Marketing Corp., SSI Group Inc., Rustan’s Supermarket and Shopwise, Royal Duty Free, Sta. Elena Realty Inc., Rustan Coffee Corp. (Starbucks), The Rustan’s Flower Shop, and Adora.

Zenaida Tantoco’s son, SSI Group president Anton T. Huang, said in his speech: “Each company is a leader in its served market. Each company caters to a different lifestyle need and consumer group. Each company offers an inimitable experience. Yet we’re united in one common vision, one history and one inspiration: my grandparents, Lolo Benny and Lola Glecy.”

Huang, his siblings and his Tantoco cousins are now at the helm of the various companies under the Rustan’s group, with some of the great-grandchildren of the founders under management training.

Huang briefly enumerated some of the anniversary activities of the company, which started with the ongoing retrospective exhibit (fifth floor, Rustan’s Makati), Thursday’s fashion show of the Sapphire Collections of the store’s private labels, a fashion ball in October featuring Japanese designer Tadashi Shoji, and groupwide sales and promos in the next months and throughout Christmas.

The Rustan’s stores will soon be decked out in its phenomenal holiday décor and Christmas windows.

“Through 65 years Rustan’s has been changing, evolving and standing,” Huang said. “Yet it remains true to its mission to bring the best brands from all over the world to the Filipino, and showcasing the best of the Filipino to the rest of the world. Rustan’s has a distinguished past. Exciting changes are taking place in the present, and we are committed to be a significant force in building our country’s future.”