An antimartial-law zarzuela film? Only in the cinema of Mike de Leon and Pete Lacaba! | Inquirer Lifestyle ❮ ❯ 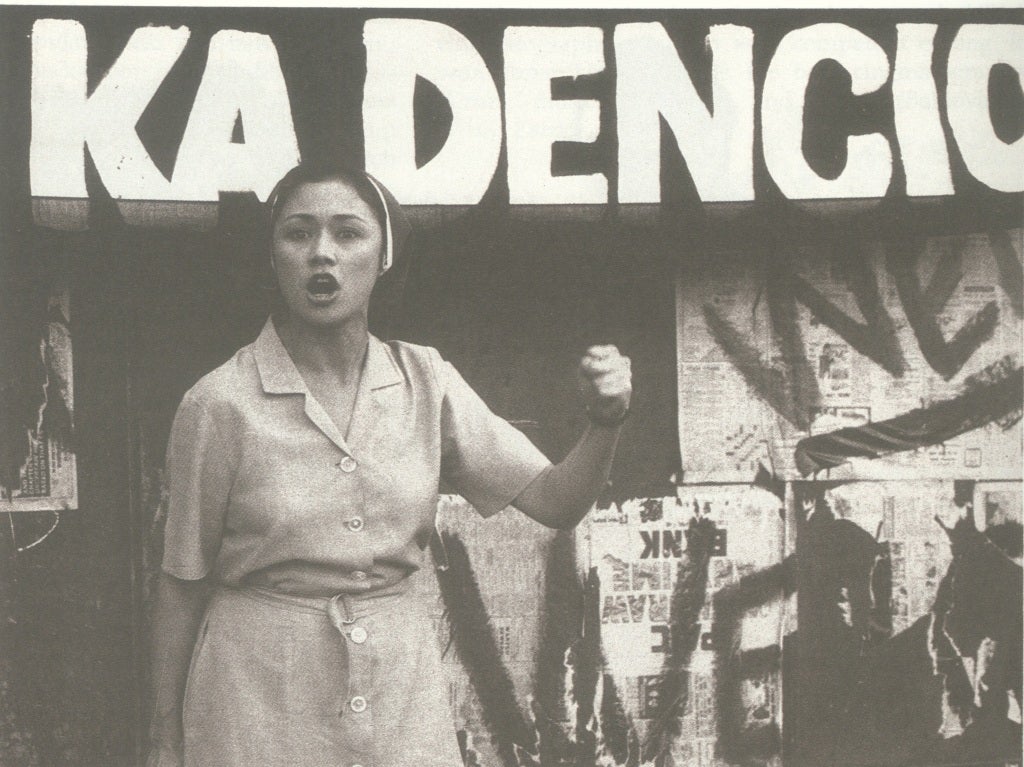 Vilma Santos in her career-defining role as “Sister Stella L” (1984). Songs from the original sound track had come from the zarzuela film conceived by Mike de Leon and José “Pete” Lacaba.

An antimartial-law zarzuela film? Only in the cinema of Mike de Leon and Pete Lacaba!

Reclusive cinema master Mike de Leon might have failed to attend the Venice film festival premiere of the restored version of “Batch ’81,” his classic 1982 movie about the violent world of Greek-letter fraternities that’s objective correlative of the Philippines under martial law.

But his presence was all over the place, especially since he had asked festival authorities to read his speech warning against the return of authoritarianism in the country.

“Sadly, it seems that incipient dictatorship is again rearing its ugly head,” De Leon said in his remarks read by Tee Pao Chew of the Asia Film Archives. “In this environment, extrajudicial killings continue unabated under the guise of a war against illegal drugs; the Constitution and rule of law are blatantly disregarded; political leaders and even Supreme Court justices are cowed into submission; and a professional army of social media trolls viciously attacks online dissent.”

“Batch ’81” was released just a year after martial law was lifted by Marcos in time for the visit of Pope John Paul II in 1981.

But the lifting was merely cosmetic since the writ of habeas corpus remained suspended in Mindanao, and Marcos later issued a decree vesting himself the power to issue “presidential detention orders” against those suspected of subversion.

Considering martial law was for all intents and purposes still obtaining, “Batch ’81” was a subtle but scathing dig at the fascism that animated both the fraternity underworld and the Marcos dictatorship.

But the parallelism was not there at first. The movie was after all the brainchild of Sampaguita Pictures scion Marichu Vera-Perez Maceda, whose family was close to the Marcoses and who married Marcos’s executive secretary, Ernesto Madarang Maceda. (They were later estranged, so she produced “Batch ’81” under her outfit sporting her maiden initials, MVP Pictures.)

MVP had wanted to make a film out of the experience of her son, Edmond, who was beaten as a 14-year-old fraternity recruit at De La Salle high school. She tossed the idea to De Leon, scion of the rival LVN Pictures, who collaborated with Clodualdo del Mundo Jr. and Raquel Villavicencio in the screenplay.

Production was hampered by “logistical problems,” according to MVP, although observers said she became uneasy when De Leon started steering the movie to exposing not only the fraternity underworld but also the dictatorship. There ensued the celebrated clash of egos (along with a collision of aesthetics, sensibilities and political commitments) between the heirs of the Philippine cinema’s biggest golden-age studios.

When De Leon submitted a letter of resignation, MVP accepted it, telling him, “I will not even insult you by getting another director… because I AM finishing (the movie) myself.” Perhaps because he dreaded the thought of his work being mangled by MVP, he reported back to the set and they reconciled. “What do I know about directing?” MVP later said.

After shooting wrapped up, she had to contend with the censors, who balked at the movie’s violence and its none-too-subtle analogy between 1930s Nazi Germany (as part of their initiation the frat neophytes wear drag and perform a mock medley of songs from Bob Fosse’s “Cabaret,” about the collapsing Weimer Republic and the rise of the Nazi party) and contemporary Philippines under martial law.

With the assassination of Ninoy Aquino the following year, De Leon conceived of a more critical movie about the Philippines under the dictatorship.

He got José “Pete” Lacaba to write the script with José Almohuela about the growing activism of religious sisters on the union front. And since Regal Films boss Lily Monteverde was looking for another project to cash in on the box-office magic of Vilma Santos, the proper financing and casting were obtained.

The result was the classic “Sister Stella L,” released in 1984. Among many superlatives of the historic movie was its original sound track that included two key songs written by Lacaba and musical director Ding Achacoso, “Aling Pag-ibig Pa?” and “Sangandaan,” which means “crossroads.”

When the movie was accepted to the main competition of Venice in 1985, its title was changed to “Incroci,” Italian for “crossroads.”

But even before the assassination and the prodemocracy wave it unleashed, De Leon had been planning a movie to raise critical awareness of authoritarianism.

Lacaba told the Inquirer that he, De Leon and Achacoso “back in early 1982” had collaborated in a “film musical” that would hint critically at the dictatorship.

“That was the time a group of artists and journalists set up the Free the Artist, Free the Media Movement, which would give birth the following year to the Concerned Artists of the Philippines,” he recalled.

“The musical, which we referred to as a ‘Brechtian zarzuela’ or ‘sarsuwelang pampelikula,’ was about the role of artists in a time like martial law,” Lacaba said. “But since Marcos’s martial law was still in effect, Mike and I agreed to set the musical in World War II, during the time of the Japanese Occupation. People in the countryside referred to the Marcos-era military as ‘Hapon,’ if you recall, but we were hoping that the film censors wouldn’t notice.”

According to Lacaba, the original title of the movie was “Sangandaan.”

Lacaba provided this writer a copy of the “second draft” of the “sequence treatment” of the film musical. In true Brechtian fashion, it opens with the director character disclosing to his production staff his artistic intentions. “We’re trying to do something different here,” he says. “If that sounds pretentious, we’re trying to go around the system.” Thus, instead of 35 mm, the production will use 16 mm; instead of technicolor, the movie will be in black and white.

“We’ve tried to do serious films with one eye on the box-office… but usually we found ourselves banging smack against the country’s antiquated censorship rules.”

So “let’s take some risks,” he adds. Whatever the risk, “we will be guided by one cardinal rule: to be good and true and beautiful.”

The parody of the notorious trinity of self-styled patroness of the arts Imelda Marcos (in itself a parody of the transcendentals of medieval philosophy) is obviously part of the movie’s Brechtian conceit.

In the script treatment, Pepe and Pilar are a couple living in Sangandaan village trying to survive in Japanese-occupied Philippines and to live peacefully in a time of war. The Japanese don’t look like World War II soldiers.

“There is a kind of Lost Command or CHDF look about them, (with amulets or talismans) hanging from their necks, tubao or Stars-and-Stripes hanging from their necks,” Lacaba says in the notes. Thus the Japanese are depicted as anticommunist paramilitia like the infamous Civilian Home Defense Forces of the Marcos years. They’re also accompanied by a “Makapili,” whose head is covered by the native bayong, the better to betray and point to Japanese authorities the secret members of the underground resistance.

Pepe and Pilar try to steer clear of the resistance, but they’re inevitably drawn to the fray when they provide shelter to the wounded guerrilla Sid, Pilar’s ex-boyfriend. When Sid suddenly has a change of heart and offers to leave the guerrillas, Pepe contacts Estong, a dramatist who now writes propaganda for the Japanese. Estong is also a composer and despite his Japanese connections, according to Pepe, is patriotic. Pepe and Pilar sing one of his compositions—“Aling Pag-ibig Pa?”

When Estong arranges for Sid’s peaceful surrender, he falls for the ruse of the guerrilla fighter who calls in his mates from the underground—a former priest (Fr. Conrado Balweg? Fr. Edicio de la Torre?) and a former carnival beauty queen (Maita Gomez?)—to seize Estong and bring him to revolutionary justice. The climax is explosive, with lots of singing and bloodshed. But could there be other endings? The director and staff try alternatives.

Whatever the ending, the musical opens and closes with Her Imeldific’s trinity.

As “Brechtian cinema,” “Bato-Bato” employs alienation effects characteristic of the theater of Bertolt Brecht. The German poet and playwright’s dramaturgy breaks the fourth wall by directly addressing the audience and exposing the play’s construction. Therefore, “Bato-Bato” might have been ahead of its time: It was “metacinema” even before the term became trendy in film studies. If it had been made, it would have antedated De Leon’s own metacinematic achievements in “Southern Winds” (1993) and of course, “Bayaning Third World” (1999).

Against imaginative literature’s requirement that the audience, in Coleridge’s famous phrase, make a “willing suspension of disbelief” to get into the illusion of reality that a dramatic work provides, Brecht seeks to make the audience always conscious what they’re watching is a mere construction, warning them against being lulled into passivity and urging them to engage with the work they’re watching with the fullness of their critical wits. Brechtian drama—or cinema—is therefore a call to critical action.

Lacaba said that in 1991, he included the songs of “Sangadaan” in his poetry book published by Anvil and finished the second draft of the script treatment of the musical that he renamed “Bato-Bato sa Langit.”

In the new century, Achacoso brought up the idea of turning the movie into a stage musical.

“Ding and I felt the stage musical could already be set in the Marcos martial law era,” Lacaba said. “But I never got to start on the stage play.”

However, since De Leon in his Venice remarks had lamented that the “secret world” of “unbridled brutality” of underground fraternities and martial law “is no longer a secret” under the new regime in the Philippines, perhaps the movie should stay as a movie and be finally realized.

As it is announced toward the end of   trite, old soap operas, “Abangan ang susunod na kabanata!”