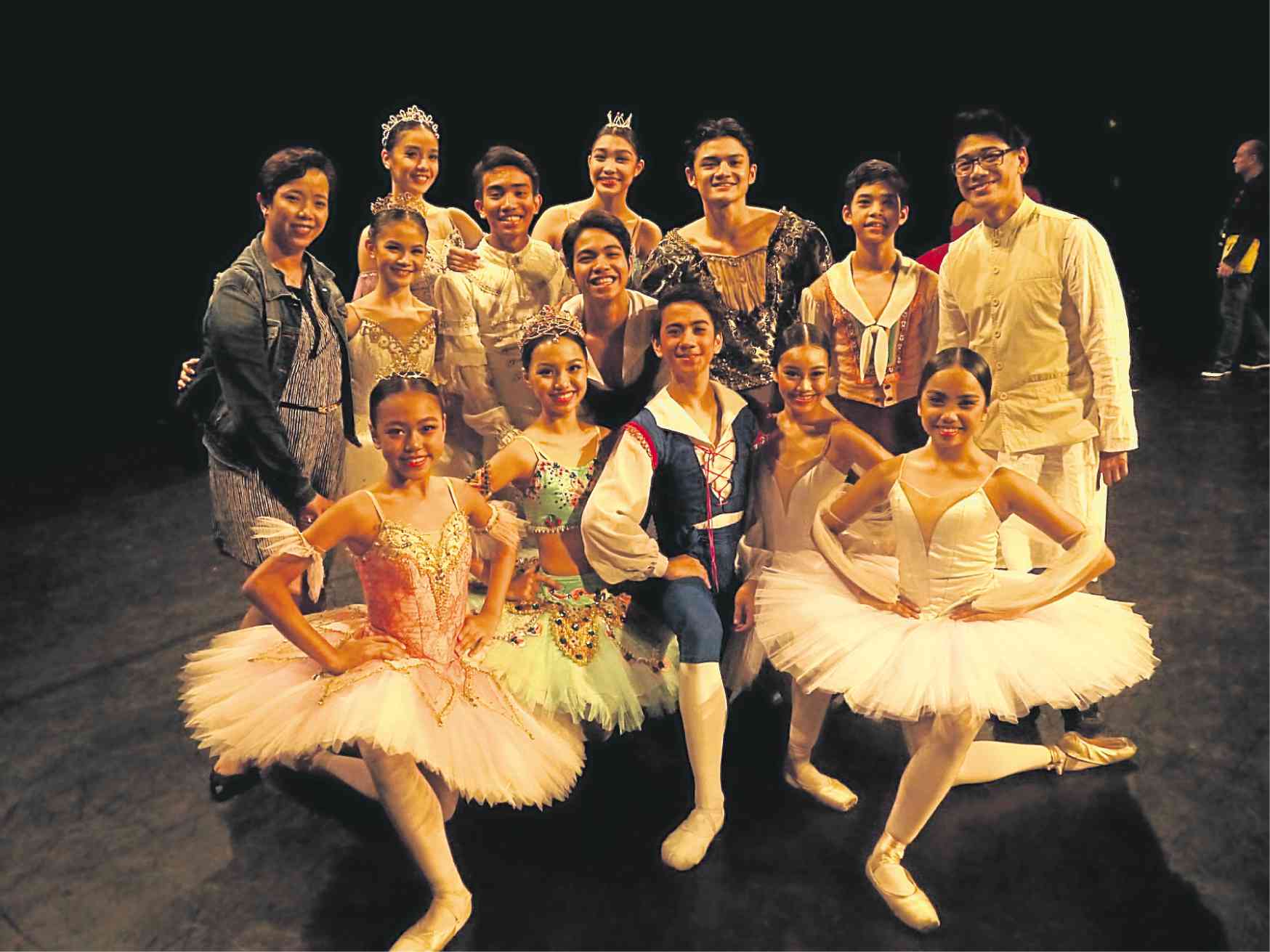 Former Hong Kong Ballet principal dancer So Hon Wah often tells the story of how ballet brought him a better life. He came from a poor family, but his talent attracted scholarships and eventual opportunities for growth.

Despite his tiny frame in a world which favors tall danseurs, So was gifted with buoyant jumps, smooth turns and crisp footwork. After winning the gold medal at the Asia Pacific Competition in Japan in 1989, he joined the prestigious Prix de Lausanne, where top dance schools and companies search for young talents. Although he made it only to the semifinals, So gained wisdom from it.

“I saw dancers from all over the world,” he said. “The ballet styles may differ, but their training moved toward the same direction. The prize wasn’t important. What I learned that made me who I am today, was more valuable.”

So rose through the ranks at the Hong Kong Ballet as the first Hong Kong born-danseur to reach principal status. In 1995, So was given a scholarship at the Royal Ballet School to enhance his technique. He obtained a diploma in teacher course for professional dancing.

Envisioning that Hong Kong should have its own international competition for young dancers, he bravely organized the AGP in 2011 with a loan, and money from his own pocket. The ballet competition invites children in the precompetitive level and young dancers from ages 13 to 18. The prizes include cash—HK$50,000 for the grand prix winner—as well as scholarships from prestigious schools and some travel allowance.

At the recent AGP held at Hong Kong Academy of the Performing Arts (HKAPA), the participants underwent hours of technique classes in ballet and contemporary dance, along with lectures. It also gave the jury the opportunity to look at delegates up close instead of just scoring them onstage.

Lisa Macuja-Elizalde, artistic director of Ballet Manila and the eponymous Lisa Macuja School of Ballet, supports So’s vision. At the recent AGP, she invited the press to witness the event, which highlights the Asian dancer performing Western classics.

For five AGP seasons, Macuja has been fielding BM dancers. Out of 12 contestants this year, Brian Sevilla won the silver prize in the 15-16 year-old division, while Joshua Enciso got the bronze in the 17-18 year-olds.

The company made a clean sweep of all the honors in the pas de deux division in 2013, and Katherine Barkman was the AGP Award Winner in 2015. Last year, it fielded 18 dancers, with Shaira Comeros winning the Most Promising Female Award, Nicole Barroso garnering silver in the age 15-16 year-old division and Raymond Salcedo the Fonteyn Award.

“AGP opens doors for people,” said Macuja, adding that such competitions are an excellent learning experience.

“After AGP, they take their dancing more seriously. There is more understanding in the way they work. They’ve got more direction,” she said. When gaffes were made onstage, the dancers strived to acquit themselves in the next round.

“If they saw dancers of their age level doing this, then I should do it better,” she added. “They become self-managed learners. Which is good, because you can’t keep on spoon-feeding them.”

At the AGP, the contestants don’t have the luxury of rehearsing their solos onstage. They have to be alert and use their instincts. Marinette Franco, a three-time AGP competitor, said meeting delegates from other countries made her realize how fortunate she is to be under BM’s tutelage. Franco would make a regal rendition of her solo from “Raymonda.”

Also on his third year at AGP, Joshua Enciso interpreted the exoticism of Solor’s high-flying solo from “Le Corsaire.” He said that, this year, he enjoyed the contemporary dance classes as it gave him more freedom in dancing.

Macuja cited Joan Emery Sia, bronze medalist in 2015, who was afraid of pirouettes but became more secure with them afterwards. BM soloist Elpidio Magat has also become more expressive and expansive in his movements after AGP, and now gets lead roles. BM principal Barkman, meanwhile, has been invited to international galas.

“Being an AGP winner is good for credentials. When international galas are planned, it’s important for the dancer to have the laureate of an international ballet competition to achieve star status. The prestige of a medal makes it easier to get jobs,” she said.

The advantage of AGP is its accessibility from Manila and its being a competition for Asian dancers. The contestants are thus on a level playing field in terms of physique. Macuja recalled BM fielding its principals to major competitions in Moscow and Helsinki, but despite their prodigious talent and intense training, the Filipinos were usually eclipsed by the six-footers.

“We can’t compete aesthetically,” she said.

For Barroso, AGP gives the company exposure. Its delegates have stood out for their Vaganova technique, named after Russian pedagogue Agrippina Vaganova. Teachers from other countries have noticed the unmistakable style of the BM dancers—the expressive coordination of the torso, arms, head and eyes, the movements enhanced by breath, the powerful legs offset by a rippling upper body, and the fluid coordination of the arms with the explosive leaps.

Barroso explained that their performance onstage was the result of daily classes where technique is internalized and the dancers’ bodies breathe the music. He felt that BM’s exacting training was validated when people came up to compliment their dancers, though training has been an uphill climb, since many of their dancers aren’t naturally gifted in executing turns or showing off elegant body lines.

BM was betting on Brian Sevilla, who was also an early favorite. He had balletic proportions and arched feet, and surpassed all the requirements for male dancing. However, a stubbed toe held him back during his variation in the final round. Nonetheless, he received a short-term scholarship to Elmhurst Ballet School in London and Houston Ballet Academy as part of his prizes, and some travel allowance from Harlequin Floors.

In the end, the jury looked for artistry.

During the awarding ceremony, Gary Trinder, head of the jury and the Zealand School of Dance, pointed out that the children should stop wearing heavy makeup and glitter. He cited that many dancers lacked musicality and breadth of movement. Their dancing should manifest the full expression of the movement and the music.

Macuja, a jury member in the precompetition categories, or children’s division from ages 7 to 12, said, “It’s amazing that you get 8 to 10 year-olds dancing better than the 20 year olds.” However, she qualified that the AGP has chosen more age-appropriate classical variations for children, who perform them on soft shoes. Many rendered fairy variations from “Sleeping Beauty” or the “Bluebird.”

The AGP capped the week with the Winner’s Gala, which showed that the judges chose the past and present winners for their artistry and individual nuances, and not mere correctness in technique.

The gold medal winners in the precompetitive or children’s division came from Indonesia
—Rebecca Hadibroto, Ilona Jahja Freya Zaviera Narendrasetya—and one from Korea
—Chaylyn Kim. For their age, they performed like ballerinas, replete with strong balances, pure classical lines and a well-projected aura.

The tartan-clad Chun Hung Yan, gold medalist in the Junior A division and student of Hong Kong Youth Ballet Academy, wowed the audience with his maturity, floating jumps and turning dagger beats in James’ solo from “La Sylphide.”

The Gold medalist in the Junior B division, Korea’s Haryn Kim, showed off his elegant lines and virile confidence in the “Paquita” solo.

AGP winner Rench Isaac Soriano of Dance Pull School of Performing Arts in Bacolod brought the house down with his spontaneity, broad jumps and sizzling pirouettes in his rendition of Colas’ solo from “La Fille Mal Gardée.” Despite some rough edges in his dancing, he knew how to play to the audience.

Sharing the AGP grand prix was Korea’s Hyeji Kang, who embodied the spirit of the solo from “Peasant Pas de Deux from Giselle.” These two winners captivated the jury and the audience with the joie de vivre in their dancing.

Law Kok Huen Tirion and her Filipino partner, Luis Cabrera, both from Hong Kong Ballet, interpreted the complexities of a relationship with difficult partnering maneuvers in the contemporary duet “Flight from the City” by Johann Johansson.

Then there were guest artists Ye Feifei, a bronze medalist in the Varna competition in 2006, and partner Li Jiabo, both principals of Hong Kong Ballet, who did a passable “Don Quixote Pas de Deux.”.

As the vampy Odile in “Black Swan Pas de Deux,” Joy Womack—AGP 2013 winner and principal of Kremlin Ballet Russia—taunted her partner Alexey Lyubimov, appearing to be mesmerizing yet indomitable. Playing wickedly with her music, she not only lashed out every double fouetté but every balance with flair.

Ultimately, Macuja viewed the AGP as a platform for Asian classical dancers. For BM, the competition has been a training ground in developing the dancers’ sense of professionalism.

Said So, meanwhile: “I hope participants gain experience the way I went through. I hope they become a better dancer or a better person.” —CONTRIBUTED