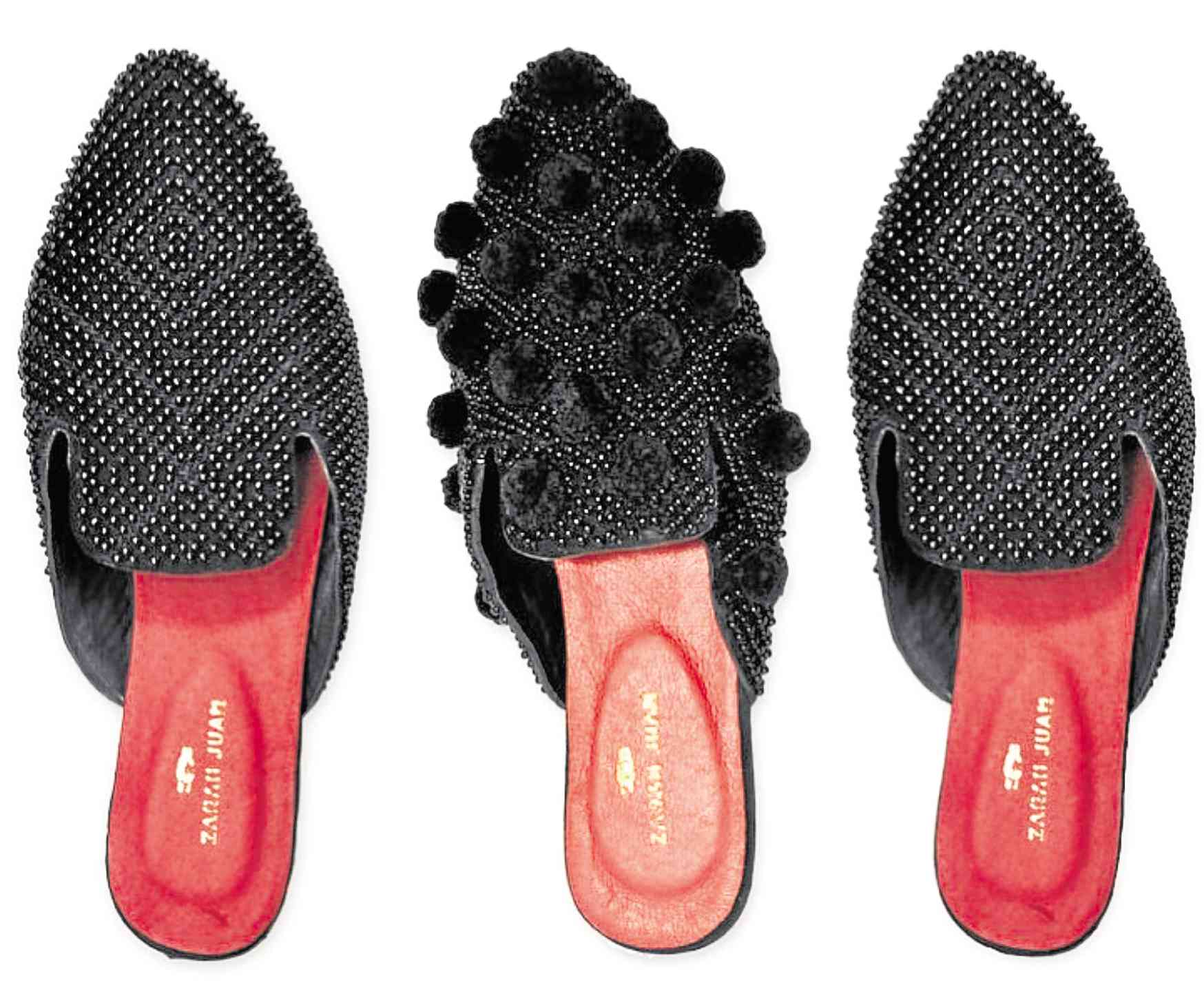 The PH-made shoes every fashionista wants

Throw women in a room with beautiful objects up for grabs, and chances are a riot would ensue. Imagine a sample sale, or any sale for that matter, and you get the picture.

It had been almost a month since her blockbuster participation at ArteFino Fair 2017, and Zarah Juan was still in a daze. For three days in August, she had well-heeled women locked in (though friendly, if there was one) over her beaded pom-pom mules in her booth at the Penthouse of 8 Rockwell in Makati.

The shoes, crafted by Marikina shoemakers using leather from Juan’s province of Bulacan, bore the colors and exquisite beadwork of the Bagobo-Tagabawa tribe of Davao del Sur. It was Juan’s first such collection.

In Juan’s small booth, cramped even more by the deluge of shoppers trying to get hold of her very limited number of shoes, the women bent and crouched to try on what would fit of what was left from the roulette—actually, designed after the agung, a Mindanaoan musical instrument—display.

Whatever fit was clutched rather inelegantly, close to their chest, lest someone else grab it. Banter was, however, quite friendly: “Oh, that’s cute! Lucky you!”
One even “stole” the lone red pair Juan lent to furniture designer Ito Kish for display in his booth. (The “thief” confessed and begged to buy it.)

It felt like WalMart on a Black Friday. Funny part is, the shoes weren’t even on sale, and at P4,000 a pair, they weren’t exactly cheap.

“One woman bought 10 pairs, all for herself. Another got seven pairs,” said the designer. They sold out, save for a couple of really large men’s sizes. (Full disclosure: this writer took part in the melee on Day 2 and went away with the lone pair left in her size.) Of her Bagobo fringe beaded bags, she went home with only one left.

“This has been a good year for us,” she added. “It’s the year when I can truly say we have defined who we are as a brand. It’s also fortuitous that Filipinos are now embracing who we are as a people and loving our own. We are able to connect with the communities and it has been very rewarding.”

Juan started working with various indigenous groups after being involved with the GREAT (Gender Responsive Economic Actions for the Transformation of) Women project of the Philippine Commission on Women in 2013, which helps small and medium enterprises.

At the time, Juan, a former flight attendant for an American airline, was still deep in her eco bag business, supplying the country’s biggest retailer and its sister company that sells balikbayan handicraft. In 2015, she went back to visit the Bagobo-Tagabawa women and started developing product ideas with them.

Juan, a self-taught but a natural designer, had already made bags, espadrilles and ballerina flats using local weaves: the binakul of abel Iloko, the t’nalak of the T’boli, the pinilian of Abra with Bulacan embroidery, the weaves of Bontoc Province, among others.

“Unlike the dream weavers of the T’boli, the beaders of the Bagobo-Tagabawa tell of a different story,” Juan said of the colorful indigenous group in the mountains of Davao del Sur.

“Their patterns have meaning. They reflect the beader’s wish or prayer, their petition. And I was in awe of how simple their prayers were—they didn’t ask for frivolities or riches. It could be as simple as hoping for rain so the flowers would bloom, or a safety passage that a snake won’t be in their path.”

The Zarah Juan brand, said its designer, is “all about collaboration.” She mentors, and working with indigenous groups requires a “different level of sensitivity” with respect to their culture and traditions.

Juan doesn’t dictate; when she proposes a design, it undergoes discussion. That’s why in the sea of multicolored beaded mules at the recent Makati fair, there were also samplings in solid colors like black and blue. While red, yellow and black are dominant colors for the tribe, they’re normally combined with other colors.

As for the addition of pom-poms, which incidentally is a trend in fashion, it came natural as pom-poms are also part of the Bagobo costume, said Juan.

In her 10 years as a self-made entrepreneur, Juan has transcended her trade to become a legitimate designer whose products are not just beautiful, but also objects that people want to buy.

She’s bombarded with queries on Instagram about where her products are available—previously, she sold them only in fairs and bazaars, with a small showroom on Amorsolo Street in Makati (e-mail [email protected] or call 09429373780). She’s also joining Manila FAME next month.

Juan said her team is now developing the brand’s online platform where they could show and sell their designs. As for those clamoring for her pom-pom mules, she hopes they could replenish their stocks by early October, but that they won’t be taking orders. They will only sell what’s on the floor since the pieces are handmade and not produced in volumes in factories.

From eco bags, Juan now has another advocacy, which is “to uphold the traditions and culture of local communities, or they will disappear,” she said.

“I talk to the [Bagobo] women every day, and they’re happy to know that people want to own what we’re making. The project is making sense to them. The younger generation is taking an interest, and for them to hear that there’s a demand, it’s a source of pride.”