The stitching, the handmade buttonholes, the ‘color matching’–it’s all in the details | Lifestyle.INQ ❮ ❯ 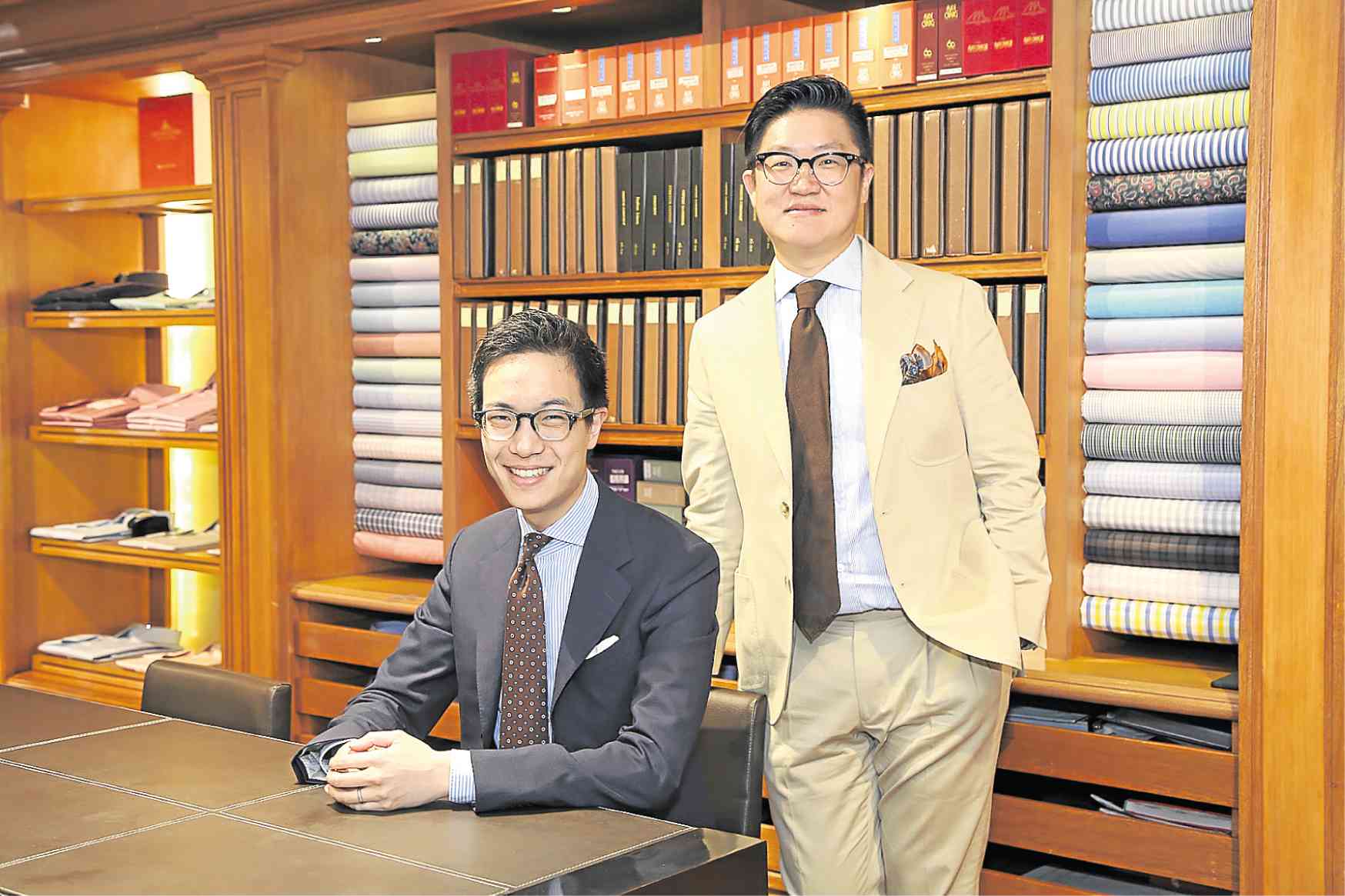 The stitching, the handmade buttonholes, the ‘color matching’–it’s all in the details

Lincoln Chang, general manager of the Hong Kong-based bespoke shirt and suit maker Ascot Chang Co. Ltd., stood up during the interview and took off his beige two-button cotton jacket. He wanted show the impeccable alignment of the thin candy stripes of his spread-collar, light colored shirt under it.

His deputy manager Justin Chang calls it “color matching,” in which two pieces of the same fabric print are sewn together to look like one continuous piece. It is one way to discern an Ascot Chang shirt, and the two gentlemen were proud to reveal this signature touch.

Store-bought ready-to-wear shirts often have fabric seams where print designs do not align. Justin finds this unacceptable. “We want to do a perfect shirt,” he declared.

He then pulled up the sleeve of his navy wool single-breasted suit to display the single-needle French stitching on the seam of his shirt sleeve.

“It’s the small details. This is fine stitching—22 stitches per inch—which is difficult to find especially in the RTW market,” he noted.

Other “small details” include handpicked Australian mother-of-pearl buttons and an exclusive selection of more than 4,500 fine fabrics all over the world that include designs from Loro Piana, Monti, Alumo, Albini and Thomas Mason.

A yellow seersucker jacket on display at Rustan’s Makati had origami-like folds on the spot where the elbow bends to allow the wearer more relaxed movement. Normally, fabrics for sleeves are cut and sewn together in a straight line.

Justin added that many clients who try on a bespoke Ascot Chang shirt for the first time “would always notice that the collar stands up very well and has a very good shape. When they put on a tie or leave collar open, the collar stands up, it doesn’t lose shape very easily. I think definitely that is a factor.”

Suits, on the other hand, “always have handmade buttonholes, handsome buttons, all hand-stitched, with more room (under the arm) as done in the traditional manner. And the inner lining is linen to allow more movement,” he added.

Ascot Chang is regarded as the homegrown sartorial pride among Hong Kong locals. Its namesake founder and master tailor began studying bespoke tailoring at age 14 as an apprentice for a custom shirt maker in Shanghai. Twelve years later, in 1953, Mr. Chang traveled to Hong Kong with an equivalent of US$10 in life savings and set up shop on Kimberley Road.

Hard work and the pursuit of excellence brought him many customers. He was once quoted saying, “My customers bring their own style to the shirt. I just give the style substance.”

Word of mouth eventually brought in big name customers; some of the current ones even have unique requests.

“We’ve had a singer ask for extra buttonholes at the back (of the shirt) to accommodate microphone wires (that travel) up his chest and neck,” Justin remembered.

Another Hong Kong celebrity who needed “a quick costume change” requested a dickey or false shirt front that Justin said “looked like a real shirt with buttons but didn’t open. Instead we opened the back (and put) Velcro so when he needed to change, he just extended his arms and the dressers took off the shirt immediately and put on his next shirt. That was something special.”

Justin smiled when he recalled a third customer who asked for a shorter sleeve on one arm “so I can show off my watch,” and a fourth who came with exquisite lace that Ascot Chang tailors had to sew into the collars.

Lincoln said another client once arrived in one of their shops with a handful of Hermès scarves for the tailors to turn into shirts. (“So the shirts are Hermès and Ascot Chang at the same time.”)

Is there anything that they want more Filipino customers to try?

“Maybe the linen shirts because of the weather and the culture,” Lincoln replied.

“It’s really kind of taken off in the last two years. We have seen it in Hong Kong and New York. We did a collaboration in Hong Kong with another store. We designed a safari jacket that has four pockets, in linen, light and really great for traveling,” he pointed out.

“People started picking it up and ordering a lot,” Justin added. “We brought a full range of sizes for people to try. We were in Cebu over the weekend and sold a few already. It’s an easy thing to wear and perfect for travel. Definitely not a suit jacket. It is more casual and (can be worn) maybe with jeans or dressed up a little, with a tie even. It’s really versatile.”

Ascot Chang is available at Rustan’s in Makati, Shangri-La and Cebu, and Shangri-La Makati.