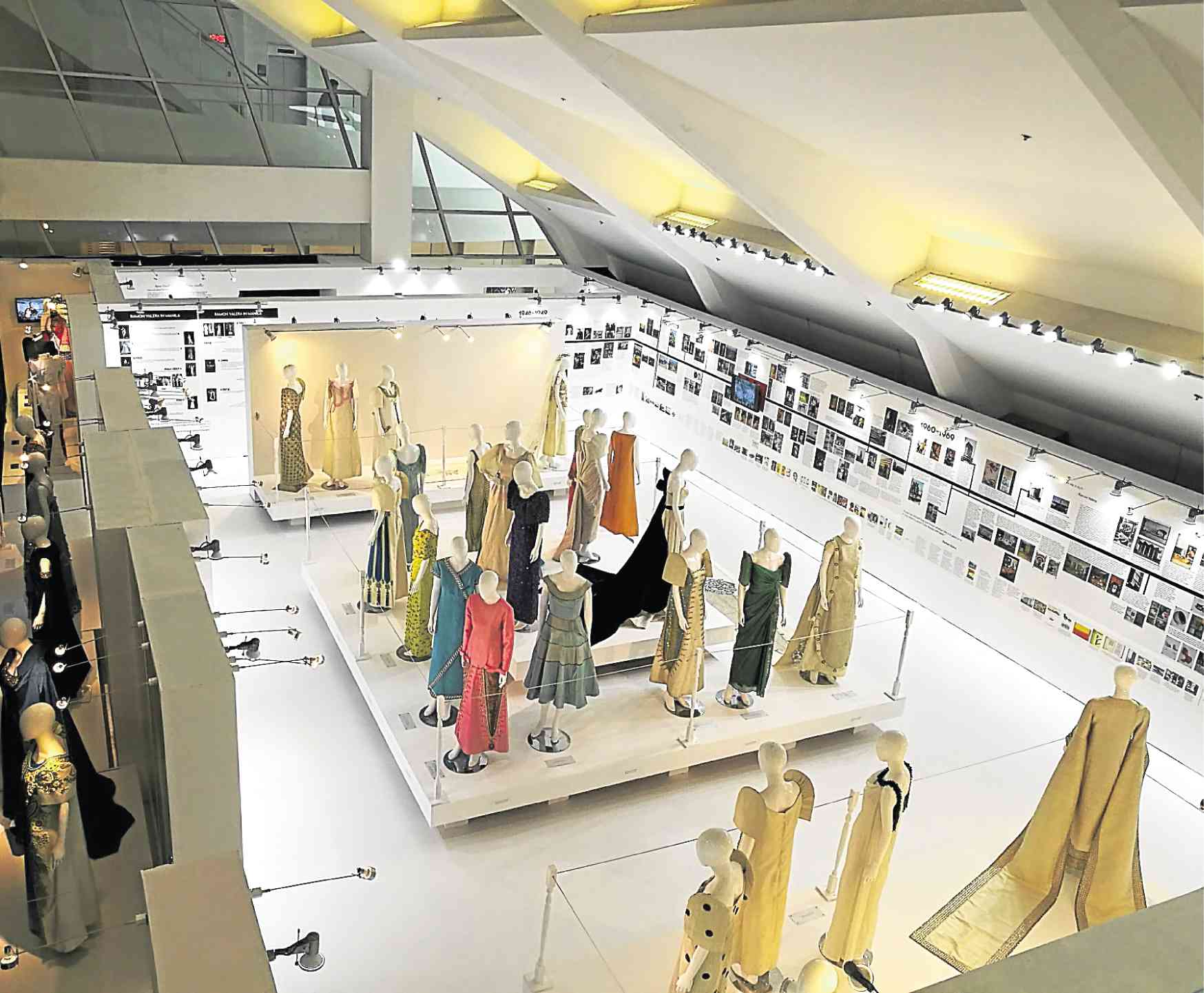 “Valera and TheModern” at the SDA Gallery of De La Salle-College of Saint Benilde is the first major show on the first National Artist for Fashion Design since 2003. —CONTRIBUTED PHOTO

The life work of Ramon Valera, the man credited for modernizing the Filipino national dress, is the subject of an ongoing retrospective exhibit.

“Valera and The Modern” at De La Salle-College of St. Benilde’s School of Design and Arts Gallery is the first major show on the first National Artist for Fashion Design since 2003, and is set against Modernism, the prevailing movement in Philippine architecture and design in the postwar years, during which Valera’s career thrived.

The exhibit means to underscore how the “modernist tenets of pared-down volumes, function over form, and the liberation of the body” were reflected in Valera’s work, according to the show notes of architect Gerry Torres, the show’s curator and director of the Center for Campus Art.

Fashion students today, and even the Gen Xers before them, have little to vague knowledge of who Valera is, and what his contributions were to Philippine arts and design that merited him the National Artist medal, the highest and most prestigious accolade conferred to a Filipino individual. (Born in 1912, Valera died in 1972.)

“Millennials have no idea who Valera is,” which makes it imperative to stage the exhibit now, said fashion designer Lulu Tan-Gan in a taped interview shown at the exhibit. Tan-Gan is also CSB’s chair for the Fashion Design and Merchandising program.
Fashion design students interpreted Valera’s classic terno, some of which are on show alongside those of the master’s. 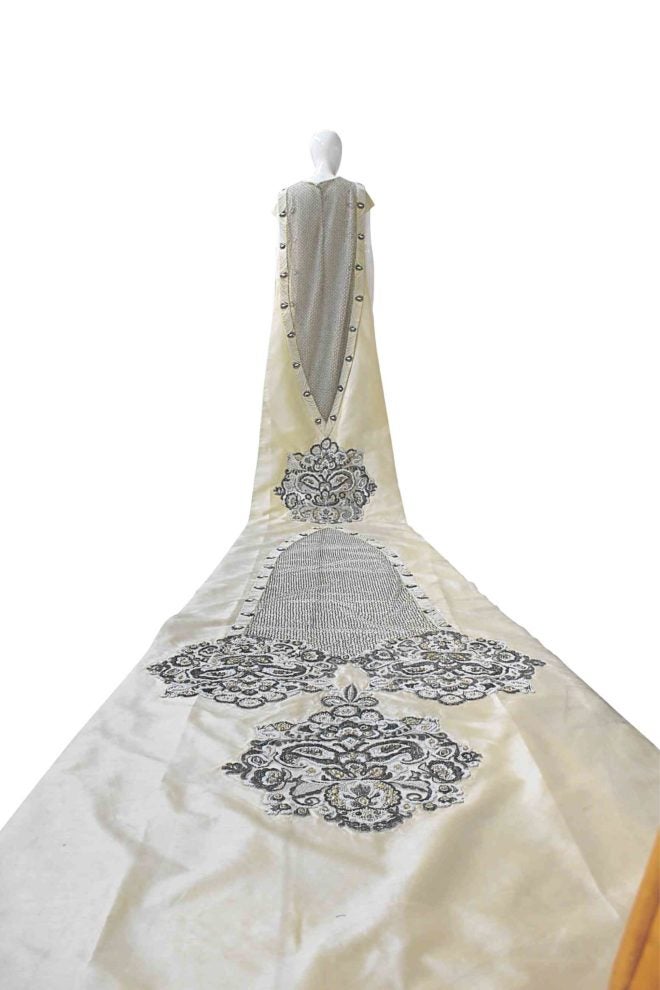 Valera began his fashion career in the 1930s. It was shortly after the war that he created a simplified version of the four-piece Philippine terno
—the baro’t saya (blouse and skirt), the tapis (overskirt) and the pañuelo (scarf)
—unified into one single, easy-to-wear dress that was zipped at the back.

Valera is also widely credited for having rid the terno of the pañuelo, which was traditionally worn to cover the woman’s bosom for modesty.
Gino Gonzales and Mark Higgins, however, dispute this in their 2015 book, “Fashionable Filipinas: An Evolution of the Philippine National Dress in Photographs, 1860-1960.”

The authors said in a past Lifestyle interview that, as early as 1910, there was already photographic evidence that some women were wearing the dress without the pañuelo—a daring move deemed scandalous at the time. (The timeline made sense as this period was shortly after Filipino women were starting to earn college diplomas. Valera wouldn’t graduate from high school, incidentally from La Salle, until 1931.)

Valera, however, notably kept the terno’s voluminous bell sleeves, and would later evolve it into the butterfly sleeves that we know today—constructed solid, stiff and proud.

Gonzales and Higgins also wrote that the exaggerated sleeves of the national dress were symbolic of the Filipino women’s emancipation and right to education. The butterfly sleeves would become a Filipino icon to the world.

Tan-Gan also noted that compared to the older generations, the terno isn’t as relevant to today’s youth, in its traditional form, since it’s hard to put on. It was designed for an era of women who weren’t expected to move around as much as men.

“[Millennials] will maintain some of its form, but they will put some functionality to it,” she said. “They will design what’s relevant to their lives.”

Valera’s career flourished in postwar Manila, during which fresh optimism was reflected in the many lavish banquets and receptions of the upper crust, where luxurious couture was de rigueur.

The period coincided with the era of Pierre Balmain, Christian Dior and Cristobal Balenciaga of European couture. Valera’s silhouettes were akin to his western contemporaries, with one very Filipino touch: the butterfly sleeves. “In that way, he was very global,” said Tan-Gan.

“If you look at his cuts, they’re actually pretty basic,” said Tats Manahan, also in the video. “But his colors are not of the color wheel. His colors are alchemical. It’s a color science more than a color wheel. And his beading designs were out of this world!”

Manahan, a writer and conservation and restoration specialist, is the daughter-in-law of Elvira Ledesma Manahan, whose many Valera gowns make up a large part of the exhibit.
One of the dresses on exhibit is from 1960, a square-necked column sheath owned by the late socialite, fully beaded in gold from neck to hip with lavish swags of green, silver and gold beads from hip to hem. Another is a beaded lime-green asymmetric terno—it has only one butterfly sleeve.

There are also four wedding dresses, all of which feature long trains with exquisite beadwork and embroidery. The train of one, from 1960, is an extension of the sleeves, such that it has two long trains trailing behind. The bridal looks are elegant and timeless.

The craftsmanship that went into the pieces is remarkable, like the beadwork on the wedding dress of Margarita Romualdez Licaros, or the long, fully beaded georgette dress of Gretchen Oppen Cojuangco from 1967. Zenaida Tantoco’s debutante dress, in Swiss lace with organza ribbonettes, is also on show.

Valera prospered at a time when clothes were truly handmade, not in the way the word couture is thrown around wantonly these days. Curator Torres wrote that the master knew how to do it all: he could design, cut, baste and sew.

Perhaps. But perhaps, too, the millennial students of design today can be inspired to try.

“Valera and The Modern” runs until Oct. 14 at the DLS-CSB SDA Gallery, at 950 Pablo Ocampo St., Malate, Manila. Admission is free.