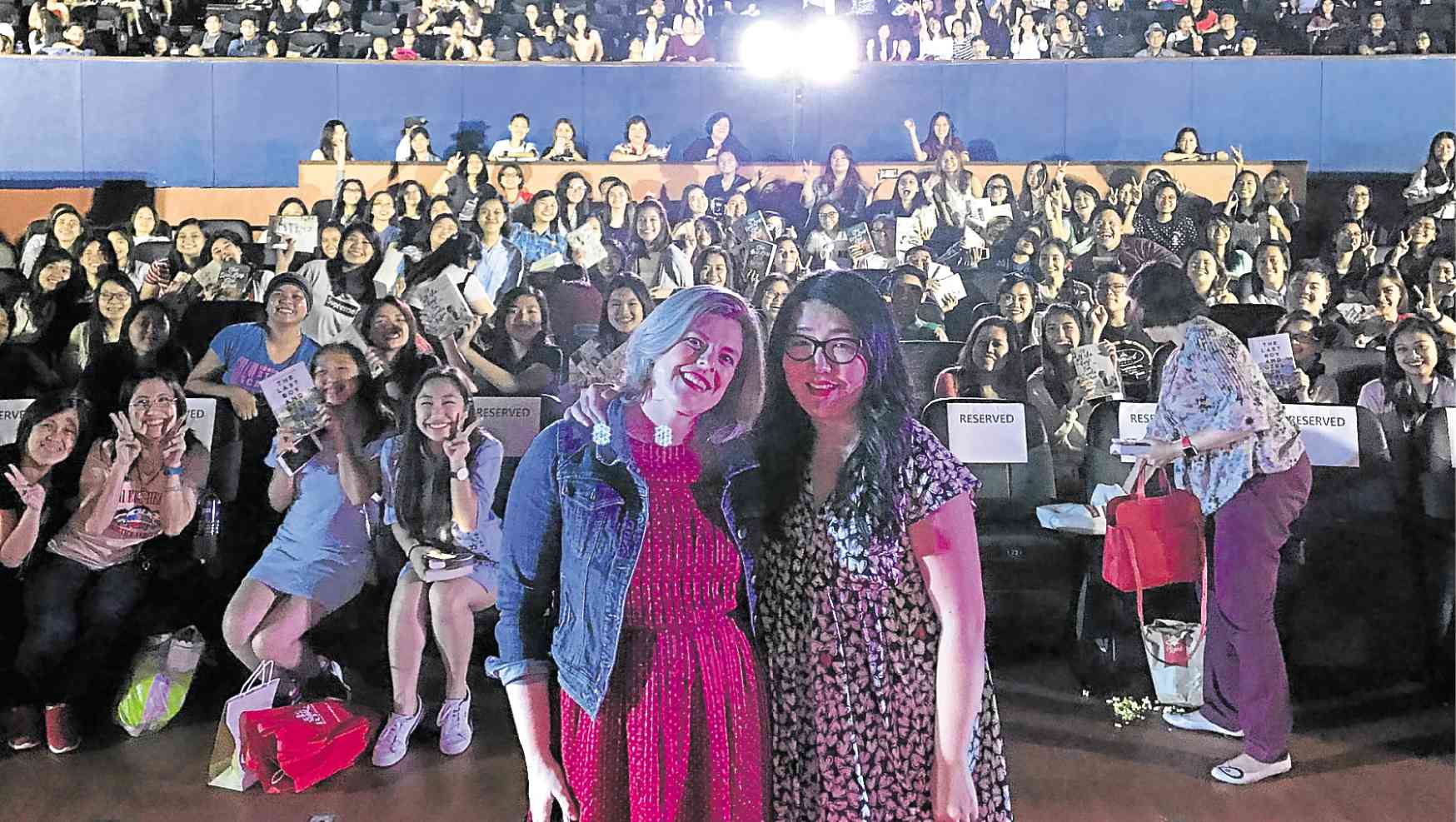 Jenny and Siobhan in SM Megamall

Jenny Han and Siobhan Vivian hang out together in the Philippines

When Jenny Han, author of “The Summer I Turned Pretty” trilogy and “To All The Boys I’ve Loved Before” series, first visited the Philippines in 2014, her friend and co-author Siobhan Vivian (“The List,” “Not That Kind of Girl,” “The Last Boy and Girl in the World”), watched her experience unfold on social media. “I fell in love with (the Philippines) just watching Jenny’s Instagram. I was like, I wanna do that, too.”

Last week, she got to do it, traveling to Manila and Cebu with Jenny for National Book Store to meet their fans at book signings and at the Manila International Book Fair. “This feels like a vacation with a best friend, I have this other real life at home, I have a husband, I have two little kids. I have a 2-year-old and and a 4-year-old. And for work, I get to travel to the Philippines with my best friend and lay in a hotel bed and watch movies and have room service and meet all these amazing people who are excited about our work and it’s like, pinch me, you know, it’s really wonderful,” said Siobhan.

The two, who first met in graduate school, were already close friends when they decided to work on their book series “Burn for Burn.”

“There was a time when we lived around the corner from each other in Brooklyn. We would just watch movies and write together and get takeout… We had a really solid friendship before we tried this together and it only kind of supported the work. It’s really fulfilling,” said Siobhan.

Jenny said, “We said from the beginning that our priority was our friendship and we had to protect that always.”

And when they were headed to the Philippines, Jenny had tips for Siobhan. “I told her that there’s gonna be a lot of fans and they’re gonna be passionate and sweet and be ready for long lines of really excited crowds.”

“Jenny said that fans are insane… just the best, the kindest, people bringing presents and really loving books. Like she mentioned how… it just seems like everyone is such a big reader and what a great experience it is as an author to come in to a country like that.”

That’s exactly what they got—hordes and hordes of enthusiastic fans, some of whom had lined up as early as the night before (9 p.m. at Megamall and 10 p.m. at MIBF) to be the first to get their books signed.

“From the very beginning they set themselves apart by being so vocal and sweet and passionate. My Filipino fans are special to me,” said Jenny.

And even before Siobhan arrived, Filipino readers already let her feel their love. “I’ve had an uptick in Filipino followers since the announcement that I was coming and now I feel like I get twice as many hearts on my tweets and my Instagram. It’s just a really palpable warmth, everyone is really cool and really kind… Everyone is so very welcoming and giving.”

Both Jenny and Siobhan have exciting things in store for their fans.

Shooting has wrapped for the film adaptation of Jenny’s book “To All The Boys I’ve Loved Before.” “I’m really excited about it. I got to give notes on the script and I gave a lot of Pinterest boards of how I imagined Lara Jean’s room and clothes and stuff. In that aspect, I was really lucky, they were generous in letting me weigh in on things.

“I went to visit the set and it was amazing to see how they all gelled together and how they were all friends. As an author, it was heartwarming to see that,” said Jenny.

She was really happy about the casting of Asian-American actresses Lana Condor, Janel Parrish and Anna Cathcart to play the Korean-American Covey sisters. “That’s what my focus was, on getting that made. Twenty-five years is too long to wait to see someone like you be the star of the story. If you never see yourself onscreen, on some deeper level I don’t think you realize it, but you internalize it that you’re not worthy of a story.”

Siobhan is excited for the release of her new book next spring. “Stay Sweet,” which has been described as a tale about ice cream, first love and feminism, is an idea that had been brewing in Siobhan’s head for seven years. It’s about an ice cream shop that has been around since the 1940s that has only been run by females. “My main character Amelia is poised to be the manager for this particular summer and she’s nervous about being a leader. She feels like those had been the best summers of her life and she wants to give the same to girls younger than her. Things don’t go as planned, a boy comes in, he’s related to the woman who’s always owned the stand and he comes to take over the business for the summer. She’s kind of pushed out of a leadership position and is now receiving orders from a boy who doesn’t know what it’s about.”

And if she’d like to see any of her books on the big screen, Siobhan said it’s this one. “Girls would really like to see a realistic girl to come into leadership and not a superhero. She’s not invincible, she’s just a girl taking charge and really coming into her own.”

Siobhan, who said she used to get in trouble in school a lot, believes that it was writing that saved her. “Jenny went to a fancy high school for smart people, I was suspended for fighting… I was so lost as a student and I just took a creative writing class in my junior year of high school because I heard it was easy. Not only did I love it, I was getting praised by my teachers for the first time. It was a life-changing thing for me. I like to talk to those kids and say, what you love isn’t always gonna fall in your lap. You need to find the thing that you love and that you care about that’s gonna take you to a happy place. They don’t teach how to make realistic gore in high school but maybe you want to be a guy who works on the set of ‘The Walking Dead’ and make amazing blood and guts… and if that sounds like something cool you wanna do and you have to find that, you know, and you ain’t gonna learn that in third period.”