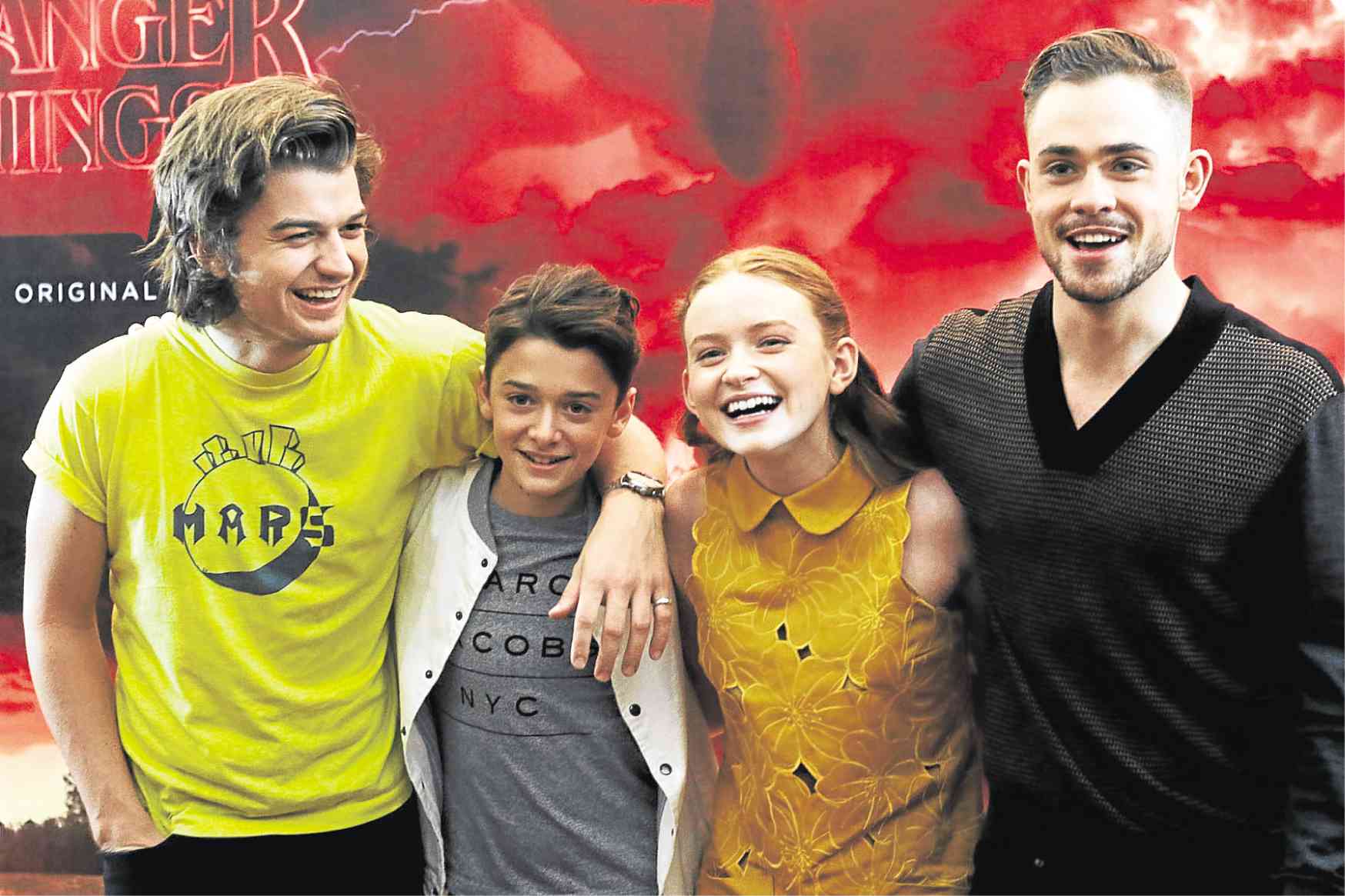 The Duffer brothers are about to unlock the curiosity door soon.

A spookier “Stranger Things” season 2 is coming out on Oct. 27 and our questions will finally be answered. Where is Eleven? Did Dustin’s teeth finally grow out? Why is Will Byers throwing up slugs? Is Steve Harrington really Jean-Ralphio Saperstein’s dad? (OK, maybe not that one.)

One thing we know for sure is that Barb will get the justice she rightfully deserves.

Joe Keery (who plays Steve Harrington) confirmed that Barb, Hawkins’ best friend of the year awardee, will finally get the attention she deserves after she was grisly murdered in the Upside Down.

Joe, Noah Schnapp (Will Byers) and new cast members Sadie Sink (Max) and Dacre Montgomery (Billy) recently visited Manila for the AsiaPop Comicon. Although they remained tight-lipped about the second season’s developments, Joe and Noah said that fans are in for a scare.

“It’s everything you love from season one but it’s not the same thing again. It’s new, it’s different, it’s darker, murkier,” said Joe.

“It’s eerie,” said Noah, who had grown a few inches taller and dropped the Beatles hair for a shorter, sleek ’do.

In Hawkins, Indiana, nothing interesting ever happens, until Will goes missing one night. A series of mysterious events soon follow, like the appearance of Eleven (Millie Bobby Brown), a girl who possesses mad telekinesis powers, and the disappearance of Barb.

The Emmy award-winning “Stranger Things,” written and produced by twins Matt and Ross Duffer, is an ’80s homage to sci-fi films like “E.T.,” “Stand by Me.” Fans and critics have called the series the love child of Stephen King and Steven Spielberg.

This coming season, Joe said: “I feel like it’s Stephen King and Steven Spielberg with more John Carpenter and maybe a little more James Cameron or something.”

Based on trailers, it’s 1984 in Indiana, almost a year since Will was rescued from the Upside Down. Siblings Sadie and Dacre just moved in town. But wait, something else is coming. The Upside Down is crawling its way to Hawkins.

After a successful first season run that launched the careers of Millie, Gaten Matarazzo, Caleb McLaughlin and Finn Wolfhard, the pressure runs high for the cast members and the Duffer brothers. But the brothers remain unfazed, and the cast members are more prepared than last time.

“Going to the second season we had an idea on what to bring to the show, so I think it’s gonna be more focused and concentrated and everybody has really brought their A-game. The Duffers are so relaxed, even when the pressures are high,” said Joe.

During filming of the first season, both Joe and Noah did not have a clear picture of “Stranger Things.” It was only after the show was done that they found out about the dark tone of the Netflix original series.

Noah, who worked with Tom Hanks and Spielberg in his debut film “Bridge of Spies,” noted that the Duffer brothers “let you do your own thing.” While Noah was practically missing the first season, he admitted that he gets more screen time this season as he copes with the trauma he experienced from the Upside Down.

“It’s not like a dictatorship. They want you to bring what you naturally would bring. I think they do that with all the departments… Everybody did their job, but [the Duffers are] like the conductors of the whole thing,” added Joe.

However, one thing has changed on set: The crew and cast members are now secretive and careful not to leak spoilers or leave breadcrumbs for fans hungry for answers.

Asked what it was like working with the newest additions to the cast, Joe, who was perky the whole interview, was suddenly lost for words.

“Yeaaaaah, I do (laughs). Are we allowed to say anything? We got to meet the new cast members pretty early on, it’s, uh, you can say things, uhhhhh,” Joe said as he looked on to his managers.

Noah interjected (much to Joe’s relief) and said the cast members see each other every day, although not all of them directly get to work with each other.

“We just have fun off set and we’re all really close,” the 13-year-old star said.

He recounted in the first season that when they shot the Dungeons and Dragons campaign scene at the Wheelers’ basement, the boys had just met and were practically strangers. It took them several times to wrap up the scene but they had a lot of fun goofing behind the camera.

But Noah confessed that shooting “Stranger Things” is “not very glamorous.”

The Upside Down, a dark, gooey and misty parallel of Hawkins where a slimy monster runs amok, was a tiny basement library in real life, and that five people held home depot buckets with goo during the shoot.

The goop tube that was stuffed in Noah’s mouth was even covered in Listerine. Why? Because he had to put it in his mouth twice!

“There’s this scene that happened to Natalia Dyer (Nancy Wheeler), she had to go to the tree [where] she crawls out of. She had to stand in the shower and guys had to pour a bucket of mucus all over her and then she’d shower but there was [still] slime all over,” Joe added.

With slimy tentacles crawling from Upside Down to Hawkins, are we going to see the gang in deep mucus sh*t?

“We said this before, but they’re definitely gonna expect a darker and scarier season and it’s very exciting and it’s everything from season one, but better,” Noah said.