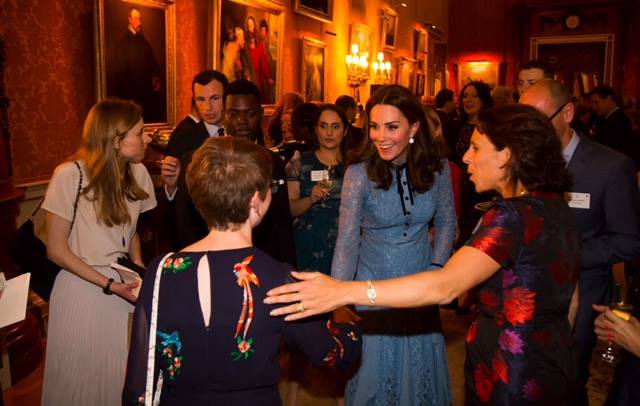 Since announcing her third pregnancy last month, Kate Middleton, Duchess of Cambridge, has been out of the public eye for some time. But for a cause close to her heart, she made an exception.

In celebration of World Mental Health Day, the Duchess joined Princes William and Harry in a Buckingham Palace reception to honor mental health workers. The trio also have their own campaign organization in support of the cause called “Heads Together”.

An aide told The Daily Mail that Catherine has still been suffering from hyperemesis gravidarum (morning sickness), but her condition is improving. “She is delighted to be here tonight,” the aide said.

In his speech, Prince William credits his wife for noticing that all three of them have been focused on mental health, thus setting up this campaign through which various charities band together and promote a serious conversation on mental health “without sadness or stigma.”

Here is the speech of Princes William and Harry for World Mental Health Day:

“They were talking in a frank way, with everyday language, and without fear of judgement, to their friends, to their partners, to their children, and to their colleagues,” William said. But despite these efforts, his brother Prince Harry said that “there is still much more to be done.”

“[N]ow we need all of your expertise, all of your energy, and all of your enthusiasm to provide the tools and space for people to have conversations on mental health wherever they are,” Harry urged the public in a separate speech. Previously, he admitted about his mental health issues shortly after the death of his mother, Princess Diana.

The brothers also announced that the Royal Foundation has invested £2 million ($2.6 million) to create a digital start-up, enabling online support.

“All of this work is proving that two heads, or three, or four, or more, really are better than one,” the royal quipped.  Katrina Hallare/JB

Congratulations! The Duke and Duchess of Cambridge are Expecting Their Third Child