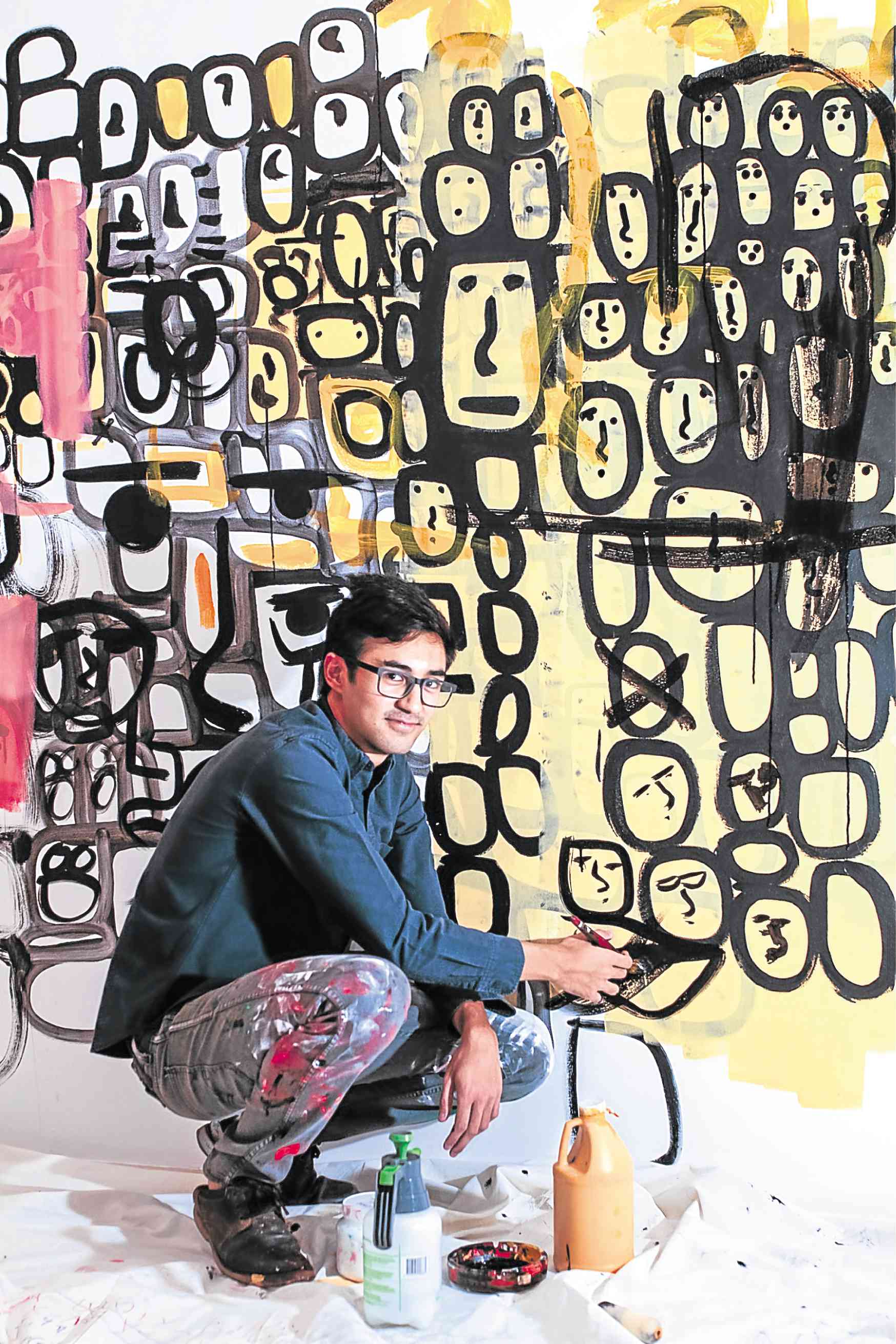 Razon scion to jolt viewers with his ‘faces’

With his paint-splattered jeans and fingers, Enrique “Enzo” Santos Razon IV has the look of an artist down pat. In his workspace in Makati, two walls are filled with works in progress as well as several finished paintings, framed and ready for display.

Propped up against one wall is a yellow, mid-size painting. Closer inspection reveals tiny, cartoon-like faces with circles, dots and dashes for eyes, noses and mouths.

The 23-year-old Razon, a recent graduate of Boston’s Emerson College, is getting ready for his first solo art exhibit at The Open Space at 134 Jupiter St., Makati.

The exhibit “Children of the Corn” runs Oct. 14-17; it is not a reference to the 1977 short story by Stephen King or the 1984 movie adaptation. It refers to the yellow, kernel-like shapes of the artist’s cartoon faces that he started doodling as a young boy.

“Corn (or maize) is also one of the oldest crops consumed by every major society on earth,” Razon told Inquirer Lifestyle.

One can’t be faulted for assuming the filmic reference after Razon shared that he had graduated in May with a degree in filmmaking.

“One of my big realizations while I was in school was how my drawings can fall under one creative umbrella,” he said. “It’s the most effective delivery system for what I want to share. That’s one of the profound realizations I had.”

The exhibit will be composed of his black-and-white photo portraits, meticulous drawings, and a handful of abstract paintings. Visitors will be greeted by two 9’ x 6’ canvases printed with 36 portraits each arranged in a grid.

In late April, Razon put out online ads on Craigslist for volunteers. He requested for mature looking subjects, and instructed them “not to smile.”

“I wanted a general feeling of confusion, bewilderment or anxiety,” he said. The artist had to initially pay several professional performers for that

specific feeling he was looking for. Once the other

subjects from Los Angeles, New York and Manila saw the pictures, they more or less had an idea on the emotion to convey.

The result is a series of portraits of men and women, their faces marked by the years. Razon explained why he deliberately chose mature subjects for this part of the project.

“There is value in trying to imagine other people’s experiences by looking at their faces,” he said. “Happiness can’t be assumed in people but everyone is dealing with some kind of stress. The gateway for imagining that in other people is through their faces.”

This desire to see faces in paintings and in pictures is one shared by many. Before we even develop a concept of ourselves, the first images that we see and latch on to as infants are the faces of our parents gazing at us from above.

“Children of the Corn” is a journey where Razon jolts viewers with 72 portraits before leading them to his minuscule, hand-drawn faces, and ending with large abstract canvases of the idea of a face.

“You recognize the latter as faces because you were conditioned to see them,” he said.

Razon is the only son of businessman Enrique K. Razon, Jr., chair of the International Container Terminal Services (ICTSI) and head of Bloomberry Resorts Co., whose crown jewel is Solaire Casino and Resort.

The younger Razon chose to hold his first solo exhibit outside the hotel because he wanted to establish a takeoff point for “his own self, own career, own choices and own path,” much like his older and only sister Katrina who has made a name for herself as a spinner with the moniker DJ Katsu.

“She’s very musically inclined. We both have that kind of stuff about us,” he said.

The pieces Razon will be showing will be for sale. “My hope is that it musters some kind of appetite for what I’m doing and that people will be very interested to have commissioned work done.”

His ultimate dream, however, is still to do a movie.

“This particular project, and where I am in life, is the most effective and efficient way to communicate at the moment.”