‘Proclamation of 8’ depicts state of unrest then and now | Lifestyle.INQ ❮ ❯ 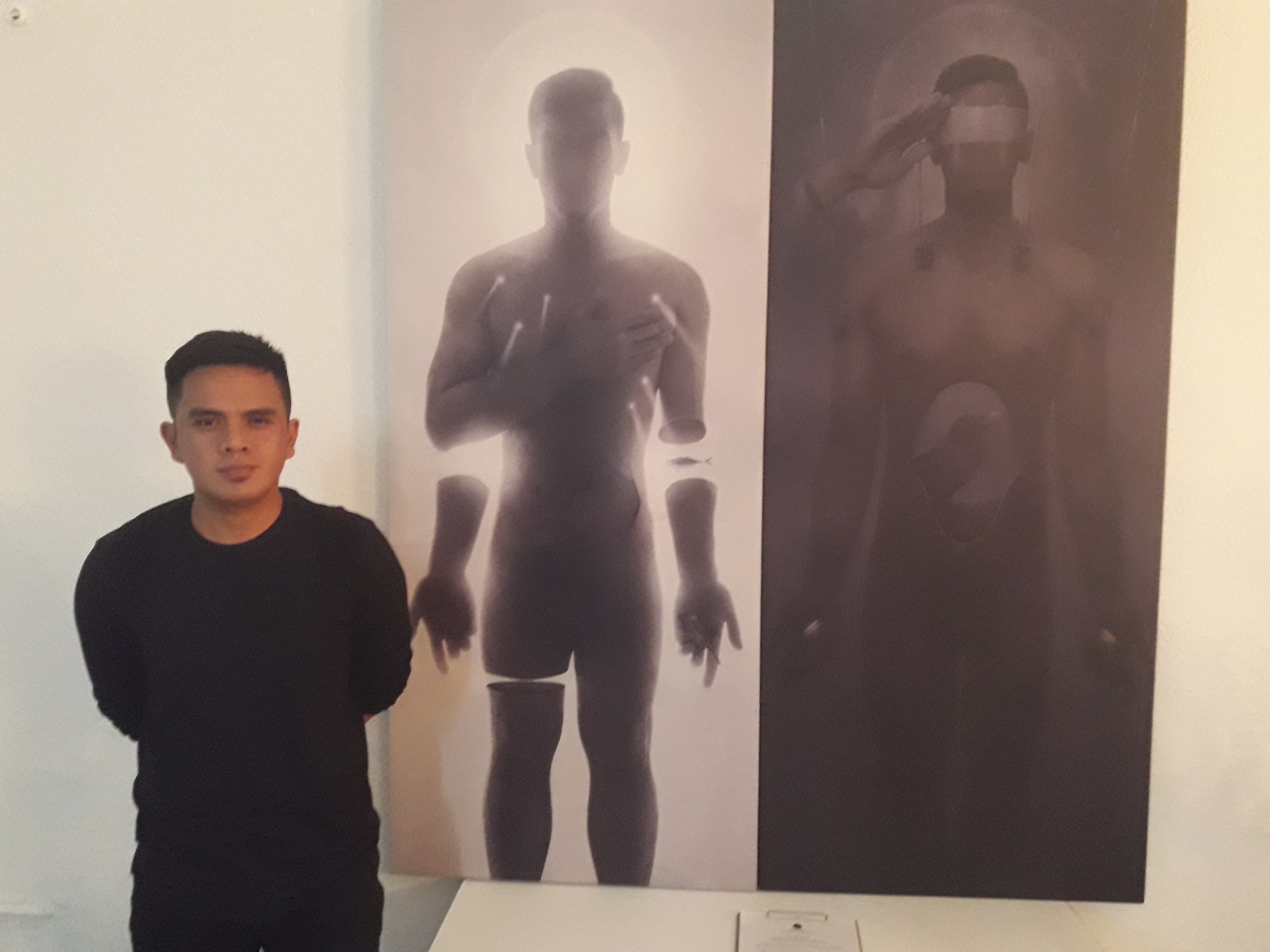 “Truth Lies in the Peripherals,” by Andrei Venal. PHOTOS BY YARA LUKMAN

‘Proclamation of 8’ depicts state of unrest then and now

Amid the recent commemoration of former President Ferdinand Marcos’ declaration of martial law in the Philippines, eight Filipino artists displayed their “current state of unrest and positions in this time of change” through the “Proclamation of 8” exhibit at Arts Above, District Gallery, West Ave., Quezon City.

It was Eya’s (also the curator) idea to schedule the exhibit at the weekend of the commemoration of martial law (Sept. 23) to also make it a political statement.

Valdez, a visual and tattoo artist, painted Marcos and faces of President Duterte with the phrases “Thoughts of failure and impending doom,” “Chapter II: Kaluluwa (Soul) for Sale,” and “To serve and protect” written upside down. He explained that now, the police do the exact opposite of their original role: To serve and protect their countrymen.

“People should stay active and agitated. Some people are misguided because the human rights violations in the Marcos era seemed to have lessened or disappeared in our textbooks,” Valdez said.

Lopez, who studied biology and fine arts, painted using dead insects and squid ink and put up an installation of “7,000 pills.”

The words “My god I love drugs” in her painting aimed to be a satire on the war on drugs.

Belonging to the millennial generation, Lopez said “I feel like millennials are not apathetic and we have to establish that. We have the power to spark discourse and we should do that more often.”

Aguilar, who presents the acrylic-on-sandpaper “Sakribisyo (Nagmahal, Nasaktan, Nag-art),” said his take was more of an internal struggle based on the news in the Philippines, personal experiences and images in his mind. He is California-based since two years ago.

Venal, whose works were black and white fabric Philippine flags and a digital print of men (oppressor and oppressed) on canvas, said his works were inspired by the principle that “silence never helps the oppressed.”

Pueblo, who was behind the “smok skren (?)n mir?r” or smoke screen and mirror interactive installation and video art, emphasized the different distractions people experience every day.

Along with the smoke as a metaphor for distraction, the videos on her work had entertaining scenes like boxing or basketball game and dancers to symbolize the distractions from our morality.

Writer and activist Rosca had two poems on separate walls in the gallery. One was titled “Tokhang” and the other one was “Pact.” Both gave scenes of senseless killings and of (rogue) policemen knocking on the doors of poor families.

Pacena was behind a two-part video, “Nang Dahil sa Iyo,” showing people gathered in a dining area and they do not seem to care about what was happening in the outside world. Pacena emphasized the basic idea of critical thinking, saying “it includes our capacity to put ourselves in the position of others and to understand each other’s place in the society.”

Eya installed a coffin with a mirror, which directly reflected whoever viewed it, as if the viewer were a victim of EJK. He also randomly delivered a performance art called “Look Who’s Tokhing” while the exhibit was ongoing. He had a boxlike mirror worn as a headgear, covering his entire head.

“I think it is more of seeing that we are just like each other, all humans capable of doing something–good or bad, right or wrong,” Eya said.