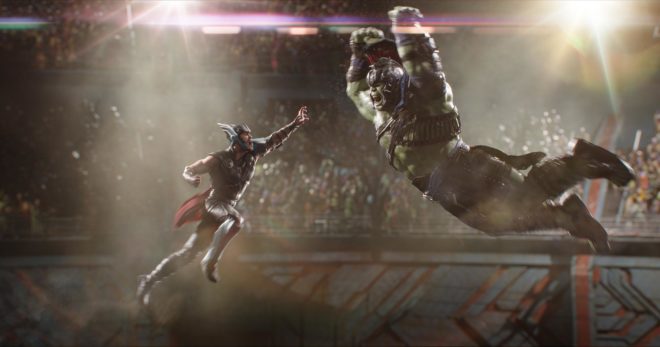 WITH his long blond hair and magic hammer, the Mighty Thor has always been one of Marvel Comics’ iconic characters. Thor has some serious history, the creation of Stan Lee, Larry Lieber and Jack Kirby in 1962 based on the Norse god of thunder.

It was a no-brainer to bring Thor to the Marvel Cinematic Universe (MCU) with Chris Hemsworth taking on the Odinson’s mantle in 2011’s “Thor,” two “Avengers” films and 2013’s “Thor: The Dark World” to generally good reviews and positive box office. This is, after all, literally the stuff of opera and mythology. But the drama may have been too much. Visually striking and epic, “Thor: The Dark World” was also so grim and serious to the point of being dour, souring some fans from the character.

In the meantime, Marvel took a risk by bringing some Z-list characters to the screen with a bouncy mix of sci-fi and humor, resulting in “Guardians of the Galaxy” topping the box office universe twice.

Marvel had clearly paid attention to that as the third Thor film, “Thor: Ragnarok,” swerves in a different direction from “Thor: The Dark World.” From the very beginning, “Thor: Ragnarok” brings a genuinely surprising amount of self-aware comedy to Thor and everybody else. This really feels like a totally different Thor.

The characters on both sides crack wise all throughout the film. “Thor: Ragnarok” amps up the laughs and the lightning as it relentlessly plunges forward, grabbing the audience by the cape, empowered by its retro electronic score by Mark Mothersbaugh instead of a more conventional orchestra score. Also: try getting Led Zeppelin’s “Immigrant Song” out of your head after watching this.

Following the events of “Thor: The Dark World,” Asgard is attacked and taken over by the returning goddess of death, Hela (Cate Blanchett). After losing his hammer Mjolnir, Thor must reinvent himself somehow, aided by a new look. Thor is reunited with his Avengers buddy the Hulk (Mark Ruffalo) in the most unusual place: the planet Sakaar, where gladiatorial combat is the leading form of entertainment. Captured by the Grandmaster (Jeff Goldblum) to do battle in the arena, Thor also meets the enigmatic Valkyrie (Tessa Thompson). Also lurking is Thor’s ever-scheming brother Loki (Tom Hiddleston). Note: All these elements already exist in the Marvel comic book continuity, as nerd points for that.

“Thor: Ragnarok” does not lack for scale or danger. Ragnarok, of course, refers to the literal end of days from Norse mythology. “Thor: Ragnarok,” written by Eric Pearson, Craig Kyle and Christopher Yost, somehow manages to be faithful to that legend but also mixes a lot of elements from the popular story arc “Planet Hulk.” There’s a really clever twist near the end of the film that doesn’t feel telegraphed at all.

This sizable tableau falls into the hands of Kiwi director Taika Waititi, whose filmography is highlighted by TV shows (most notably, HBO’s “Flight of the Conchords”). Marvel has had a good experience turning over their big budgets to younger, more eccentric directors (James Gunn of “Guardians” is exhibit A). Here, Waititi takes over from Kenneth Branagh and Alan Taylor to great audience-pleasing effect. This movie is a better, bigger “Guardians.”

Now to deal with the Fenris Wolf in the room, the phrase “buddy comedy” has been attached to this film as soon as the first trailer dropped to the consternation of some. Now that “Thor: Ragnarok” is here, it can be confirmed: this is a buddy comedy—a really, really good one. The often underrated Hemsworth handles the change in tone seamlessly, proving to all that he really is Thor. But his dynamic here with Ruffalo is outstanding, giving the lead heroes an authentic feeling of friendship. This ironically makes “Thor: Ragnarok” the best Hulk movie yet.

It should be pointed out that “Thor: Ragnarok” has pretty much the most impressive cast of all the non-“Avengers” films: Hemsworth, Hiddleston, Blanchett, Thompson, Idris Elba, Karl Urban and Anthony Hopkins. Part of Hemsworth’s gifts is that he knows how to share the stage with his talented colleagues. Hiddleston is always a delight as Loki, and he gets a good opportunity to show his wares here. Goldblum does Jeff Goldblum-y things. Blanchett steals her scenes as Hela. But the big discovery here is Thompson as the brassy, badass Valkyrie, who wields her weapons well and chews her scenery wholeheartedly in a star-making turn.

Marvel has been very busy lately, what with its different franchise and TV shows. “Thor: Ragnarok” felt a bit like a forgotten project. But it shouldn’t be. “Thor: Ragnarok” is the reason why Thor and the Hulk were absent during the tumultuous events of 2016’s “Captain America: Civil War” where Avengers battled fellow Avengers. Thor, Hulk and the Avengers will be on the same side when they go up against the all-powerful Thanos (Josh Brolin) in 2018’s “Avengers: Infinity War.”

But this is no mere baton-handing opportunity. Eschewing its high fantasy feel for a more cosmic sci-fi tone, “Thor: Ragnarok” is the first real Thor film with consequences: characters die and the film goes into places it can’t return from.

More importantly, “Thor: Ragnarok” is a real game-changer for the Thor franchise, shattering the hero’s status quo as well as the films’ identity. Thor will never be the same. This shows Marvel can still surprise us. Funny and furious, “Thor: Ragnarok” rewards Marvel’s risk-taking behavior with one of the best Marvel movies ever made.