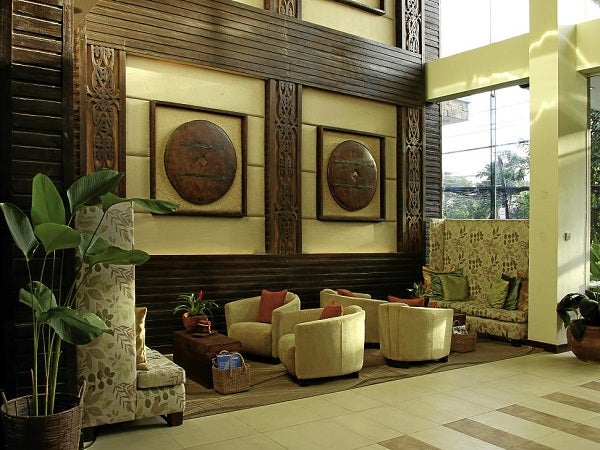 Snuggling between fresh Egyptian cotton bed linens and goosedown duvets  in a springy bed is an extravagance  by today’s standards. While many upscale accommodations provide the standard linens with 200 thread count, this boutique hotel in Quezon City ups the ante with its 400-thread count linens, pillows whose supportive core is surrounded by soft down, and a mattress with pocket springs that follow the contours of the body. Likewise, the bed’s antibacterial memory foam wards off dust mites that breed allergies.

Cocoon Boutique Hotel offers a different kind of luxury that is synonymous with sustainability.  Distinguishing itself as an urban “green” hotel, it is a pioneer in this niche. Situated off Timog in Quezon City, Cocoon Boutique  Hotel is a neat  and welcoming assemblage of natural and recycled materials, including architectural salvaged ipil, yakal and tindalo, wood,  warm cast concrete, and woodstone accents.

The canopied, double-glazed glass windows ward off heat and rain.  The roofdeck is accentuated with accent walls made of woodstone that are remnants from the construction.  The roof hatch also prevents the heat island effect. It helps that the pool and the plants provide added coolness to the building. 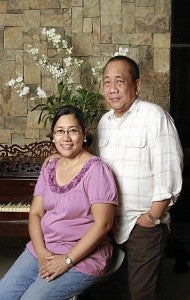 Cocoon is following the worldwide trend, wherein hotels are implementing  green guidelines such as energy conservation and eschewing harsh chemicals. The hotel was opened this year by a couple who want to offer the cozy, bighearted feel of a family place. The Vinzons invested their retirement funds into this venture.

“We thought it was the call of the times, what with  the effects of climate change, illegal logging, and  super typhoons,” says Regina Cielo Vinzon, president and general manager of  Dreamventures Property Management Corp., which owns Cocoon Hotel.  “It’s time to give back by having a business that is socially relevant by being green.”

Her lawyer-husband, Rafael, the vice president and treasurer, adds, “It’s our little way of changing the world. This building is 95 percent her work.”

Ms Vinzon recalls that when they registered at the Department of Trade and Industry, the name Cocoon was found in many fields. “Ours is the only one in the hotel business,” she says. 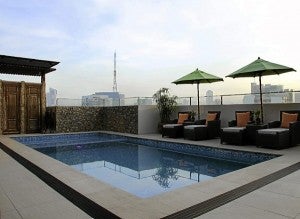 (Her husband notes that it’s going to be challenge when the Ayala hotels open their Kukun brand next summer.) “We thought of the name Cocoon because it denotes shelter, safety or metamorphosis which relates to green,” says Ms Vinzon.

This boutique hotel tries to live up to its name of cocooning. Its public spaces are more than functional. The lobby faces the east and takes in the habagat wind for passive cooling. The double-volume ceiling not only provides better air circulation, but also lends a feeling of grandness.

The walls are lined with architectural salvages and woodstone for textural contrast. To lend a period character, it is adorned with giant carved wheels from  carabao-drawn carriages,  antique fretwork, and heirloom chests and an original 1800 Steinway Grand piano.

Through an air-to-air exchanger system, fresh cool air from the roofdeck flows into the acoustically panelled hallways, thereby doing away with the need for air-conditioning. 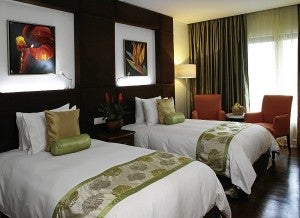 The suites are embellished with intricate fretwork from old homes and recycled wood. The rooms are furnished with inverter-type air-conditioners that use less electricity and are less damaging to the ozone layer, LED televisions, and a thermoelectric refrigerator.

Ms Vinzon points out that the water heater uses a pump that collects ambient heat to raise the temperature.

Guests can luxuriate in deep-soak bathtubs while grooming themselves with organic toiletries packaged in stone paper and soy ink, while their heads are covered with a plasticized cornstarch caps. They can dry themselves with 100 percent Egyptian cotton towels.

Ms Vinzon recalls how builders were lukewarm to the idea of incorporating green features such as  low-emission glass that allows light to penetrate while reducing heat,  the dual piping system, and greywater recycling.  Nonetheless, she followed her instinct.

“We’re in the energy conservation phase. The next phase is energy renewal. There are provisions for solar panels and hydro-electric power.”

She adds that the green practice augurs well with guests. With one of the best beds in town and Cocoon’s warm hospitality, the guests realize that comfort need not be compromised to be sustainable.  Aside from the linen and towel reuse, the norm in all hotels, they are reminded to segregate their trash in the rooms.

Some visitors select their accommodations because of the company’s green practices, such as not having any rugs which can have allergens.  Cocoon uses nontoxic cleaners and water-based paints.

Although the hotel still has to apply for certification from a governing green council, it has addressed most of its requirements, from its proximity to schools, hospitals, and retail centers to the LED light-filled Murano chandeliers which were salvaged from another property.

For its charity, it will collaborate with Bridges, a school for special children, wherein they can get training in housekeeping or kitchen work.

Cocoon Hotel’s branding and clearly focused green orientation have been its come-on.  To locals, its eco-friendliness is a novelty, but to frequent individual travelers, it ranks high for the beddings, and for eschewing rugs and carpets in the hallways and rooms.

Likewise, the hotel’s concessionaires are an attraction, such as a salon patronized by artistas, a multi-aesthetic center, a spa, and two unique specialty restaurants that offer wine pairing with desserts and two dueling chefs with competing menus.

Asked about the financial advantages of going green, Ms Vinzon replies that there was significant savings in construction, as the materials were reused and not wasted.  It would take time to recover the investment on installing light bulbs that consume less energy and bathroom fixtures that control the water flow. Still, with the rising cost of fuel, the green measures, once deemed expensive,  will consequently be  considered a wise move.

Says Ms Vinzon, “It makes the business more viable as you reduce, reuse, and recycle. This translates into either savings or better service for the guest.”