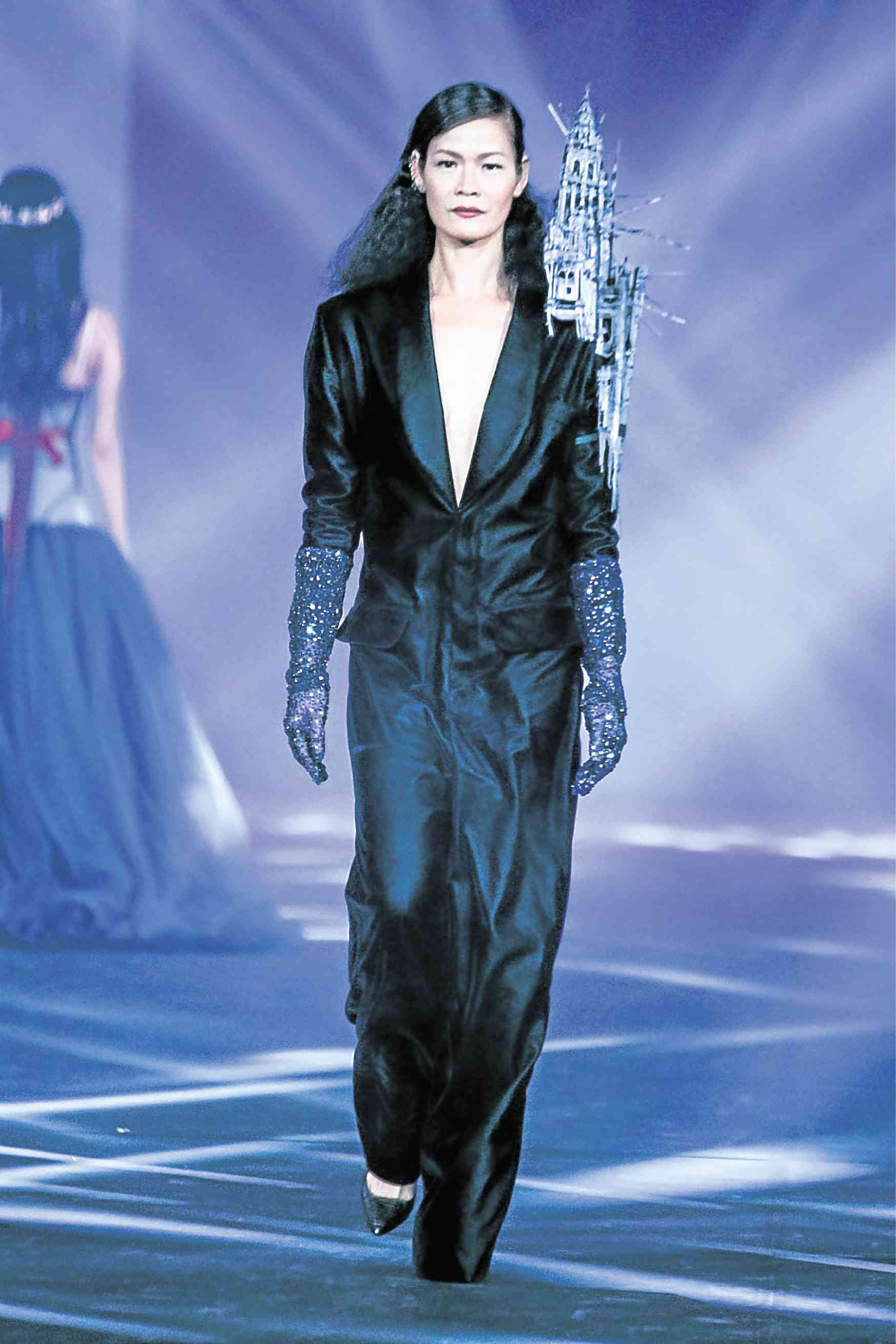 Take Me to Church” was quite the apt anthem for the finale of Joey Samson’s Red Charity Gala collection, “PilgrimAge.”

Hozier’s Grammy-nominated song speaks of the Irish musician’s rebuke of the Catholic church’s stance on homosexuality.

Take me to church
I’ll worship like a dog at the shrine of your lies
I’ll tell you my sins and you can sharpen your knife
Offer me that deathless death
Good God, let me give you my life

In a way, Samson’s 49-piece collection is also his own defiant statement against both social and style conventions. The annual black-tie fundraiser’s ninth fashion designer was an unlikely choice—he doesn’t do show-stopping clothes, which is expected in a venue where the fashion is entertainment. His aesthetics are minimalist and androgynous, his forms often deconstructed.

The beauty of Samson’s often deceptively simple silhouettes is best appreciated in more intimate venues, not in a grand ballroom where the norm is, more is more.

Beneath the designer’s quiet and humble demeanor, however, is a strong point of view when his work is involved. As one loyal client advised before the gala, guests shouldn’t expect the usual ball gowns, not because Samson doesn’t have the skills to make them, but because he was likely to interpret formal wear in other ways.

And the client was right. While Samson, indeed, came up with big, floaty tulle dresses—soft tulle being, not many know, a material he has often toyed with—in his three-segment collection, he offered other options.

Most notable was the monastic flavor to the clothes. Samson, a devout Catholic, has said that the collection was inspired by a recent European pilgrimage. But he was also quick to clarify that the inspiration wasn’t to be taken literally.

Take, for instance, the pieces inspired by cassocks and vestments—conservative, long-sleeved and high-collared, only to reveal the irreverence in their open backs. One such look was a mid-length navy dress with a severe collar, slashed at the back, and paired with a fully sequined pencil skirt. He also balances prim and provocative in a sheer sequined lace midi dress with a sweet bow at the collar.

Sequins are one material Samson is using in a collection for the first time.

Another look was an abbreviated top with extra-long sleeves and an open back. The skirt was embroidered with “Hail Mary” in different languages. He had a few hand-beaded pieces, sporting patterns inspired by Portuguese azulejo tiles, and the carved patterns on the doors and ceilings of European churches. These gave texture to his characteristically minimal looks.

Samson experimented with chain mail, made by hand, and fashioned into a tunic, a top and a skirt. For several pieces, he collaborated with paper artist Ryan Villamael, whose intricate and sculptural work was made into wearable accessories—as a hat, a neckpiece and a shoulder accent for the finale look.

As formal alternative, Samson dressed a few of the female models in his signature sharp suits, with oversize jackets, and in rather uncharacteristic materials—at least for him. There were pantsuits in brocade, velvet and satin, in rich jewel tones.

For his men’s wear, as is typical of Samson, he pushed the envelope with feminized tops (think lacy bib over sheer shirt) and A-line shorts. Another was a sheer beaded tank. Some shirts sported pussy bows, while he batted for both long, roomy pants and skinnier options, almost like leggings.

There are quite interesting details in the clothes that were sadly overlooked in such a big venue, including a men’s red blazer with braided details on the back. Seemingly simple looks had several layers of varied textures and fabrication. There was a military velvet coat with baggy boxing shorts—on a female model. One men’s suit had a deconstructed jacket, sporting contrast-color elastic cuffs and waistband, typically found on sweatshirts.

He had the same treatment of a women’s look—half sweatshirt, half dress shirt.

Samson pushes the athletic details in the form of sporty stripes on some men’s looks, including formal pants. But were they, in fact, athletic or tuxedo stripes? Who needs to know?

Samson stayed true to his vision: His last look wasn’t a ball gown, but a velvet jumpsuit worn by his muse, Jo Ann Bitagcol, a Villamael paper sculpture atop one shoulder.

In this designer’s book, it is that simple to make a statement.

Red Charity Gala featuring Joey Samson was presented by Bench to benefit the Philippine National Red Cross and Assumption HS Batch ’81 Foundation. It was directed by Robby Carmona, with hair and makeup by Henri Calayag and Eric Maningat, with styling by Noel Manapat. Philippine Daily Inquirer and Inquirer Red were media sponsors. 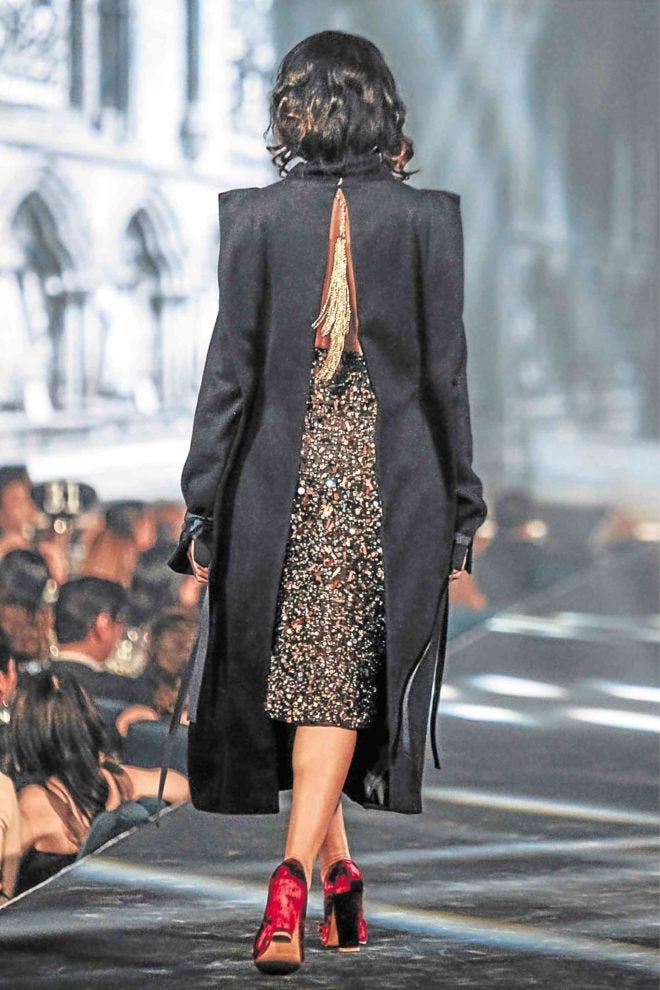