Why Fatima is the pilgrimage to make this year | Inquirer Lifestyle ❮ ❯ 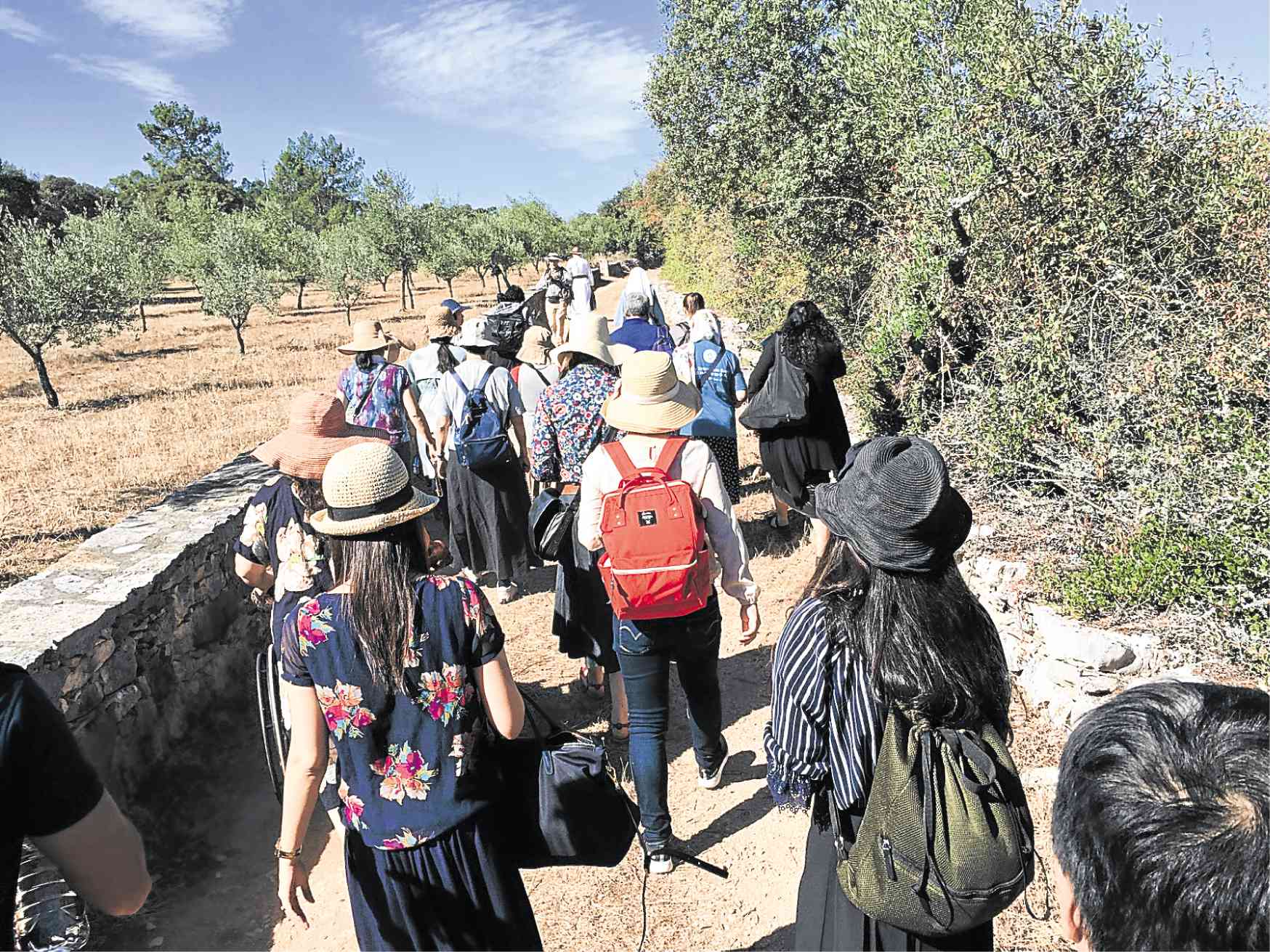 Pilgrims retrace the route Sister Lucia, Saint Jacinta and Saint Francisco took to see the apparition of Our Lady of Fatima. —PHOTOS BY CINT A. POSADAS

Why Fatima is the pilgrimage to make this year

In August, the weather in Portugal can get hotter than the Philippine summer. In Fatima, a 90-minute drive north of Lisbon, temperature peaks at 42°C during midday.

But for the pilgrims who flocked to Fatima at the tail end of the Mediterranean summer, the heat is hardly a hindrance. This is a once-in-a-lifetime chance to worship Our Lady of the Holy Rosary of Fatima on the 100th anniversary of her apparition, in the actual Shrine of Fatima.

This entails long walks up rolling hills. Thankfully, the weather is cooperative.

Millions of pilgrims have been flocking to Fatima since the first time the Virgin Mary appeared to three shepherd children—Lucia Santos (now known as Sister Lucia), and her cousins Jacinta and Francisco Marto (canonized as saints on the first centennial celebration of the apparitions last May 13).

And because of the centennial anniversary, Fatima has been experiencing an even greater influx of tourists and pilgrims.

In the early mornings, processions organized by various pilgrim groups from all the over the world convene at Fatima’s hotel strip. While praying the rosary, the pilgrims march to Our Lady of the Rosary Sanctuary.

This area stretches from Fatima’s main thoroughfare, the Avenida D. José da Silva, up to the olive tree groves of Cova da Iria. It takes a 30-minute trek to get to the grove where concrete walkways trace the route the three shepherd children took to the site where Our Lady appeared.

The spots where the Guardian Angel of Portugal and the Blessed Virgin appeared are marked by monuments that depict the children and the apparitions.

The scorching sun and the pathways uphill are hardly deterrents to couples pushing strollers carrying their infants, and to some elderly on wheelchairs. But since the rustic surroundings have been preserved, an intermittent cool breeze provides relief from the heat. An effort was also made to make the area more tourist-friendly and conducive to prayer.

Also, thoughtful amenities such as air-conditioned restrooms were built halfway to the monuments.

Another pathway leads to the Valinhos Sanctuary, an open area where sheep grazed. Our Lady of Fatima also appeared to the children on this spot.

Stations of the Cross line this route which leads to a small chapel ensconced at the highest point of the sanctuary.

Nearby is the village of Aljustrel, where Sister Lucia, Saint Jacinta and Saint Francisco lived. Both the Santos and Marto residences, large and comfortable, have been converted into museums.

The narrow roads of the village are lined with souvenir shops selling rosaries, images of Our Lady of Fatima, and keepsakes like key chains with pictures of the three little shepherds. Likewise sold are ice-cold bottled water and Coke Zero.

The shop across the Marto residence is owned and manned by an elderly lady. Her name is Jacinta Marto, daughter of one of the siblings of Saint Jacinta and Saint Francisco. She spoke very little English but, much to our relief, one of the few English words she understands is “discount.” She gladly gives shoppers a lower price for the merchandise we buy.

Prices in this village are much more affordable than those in the commercial district of Fatima.

The centerpiece of the Sanctuary of Our Lady of Fatima is the Basilica of Our Lady of the Rosary. Built in 1928, it is where Saint Jacinta and Saint Francisco are entombed. The basilica is part of a strikingly modern complex comprised of religious buildings. Its large open square echoes the main square of the Vatican.

At the main entrance along the Avenida D. José da Silva is the architecturally impressive Paul VI Pastoral Center, which contains two auditoriums and room accommodations for as many as 400 pilgrims. Beyond this building is a smoothly paved 500-meter pathway that stretches across the open square from the pastoral center to the main basilica. This special pathway is used by the devout to recite the Holy Rosary as they walk on their knees toward the basilica.

To the left is the Chapel of the Apparitions, which also houses the small original chapel built in 1918.

Despite its status as a major tourist destination, Fatima remains tranquil and laid-back. Traffic is nonexistent and there seems to be more pilgrims than residents.

Commercial establishments close before 11 p.m., and happily, the local folk aren’t into videokes.

Fatima carries a naturally cosmopolitan atmosphere that many of our upscale real estate developers try to emulate, yet can’t quite capture. The resplendent Avenida D. José da Silva is named after the Portuguese bishop who gave the approval of the authenticity of the apparitions through a pastoral letter he issued in 1930.

This avenue is lined with tall trees and wide, open sidewalks that can accommodate outdoor cafés.

Most of the restaurants serve the Portuguese equivalent of our tapsilog. Prices for each dish average 8 to 10 Euros. The service in these restaurants is always folksy. Customers are left with a happy feeling that the warmth of the staff comes from the heart and not from a training course. This also holds true for those who work in the souvenir shops.

The public transportation terminal is located along Avenida D. José da Silva. One can catch a quaint mini train that isn’t driven on railways and tour Fatima’s commercial district, the museums and the residential neighborhoods.

But as pilgrims, we are told the sole purpose of visiting Fatima is to pray, offer sacrifice, enhance one’s devotion to the Blessed Virgin Mary, and take inspiration from Sister Lucia, Saint Jacinta and Saint Francisco. As Fr. Fabrice Loschi says, we don’t come here as tourists.

He adds that we are now part of history as Fatima marks the 100th anniversary of the apparitions. This culminated with the anniversary celebration of the final appearance of Our Lady of Fatima on Oct. 13.

Father Loschi of the Society of Saint Pius X is among the priests who organized this pilgrimage. The very large group consisted of the Society’s parishioners from Europe and Asia, who gathered for an outdoor traditional Mass celebrated within the premises of the Our Lady of the Rosary Sanctuary.

There are also fun and light-hearted moments. Both the priests and the nuns we are with display an uncanny knack for dry humor.

At one point during dinner in the hotel, a young and charming French nun called Sister Lucy has a chance encounter with a young Filipino pilgrim. Her name is Jacinta Posadas.

With her tongue firmly planted on her cheek, Sister Lucy says to Jacinta, “Hello Jacinta! Did you see Our Lady today?” —CONTRIBUTED