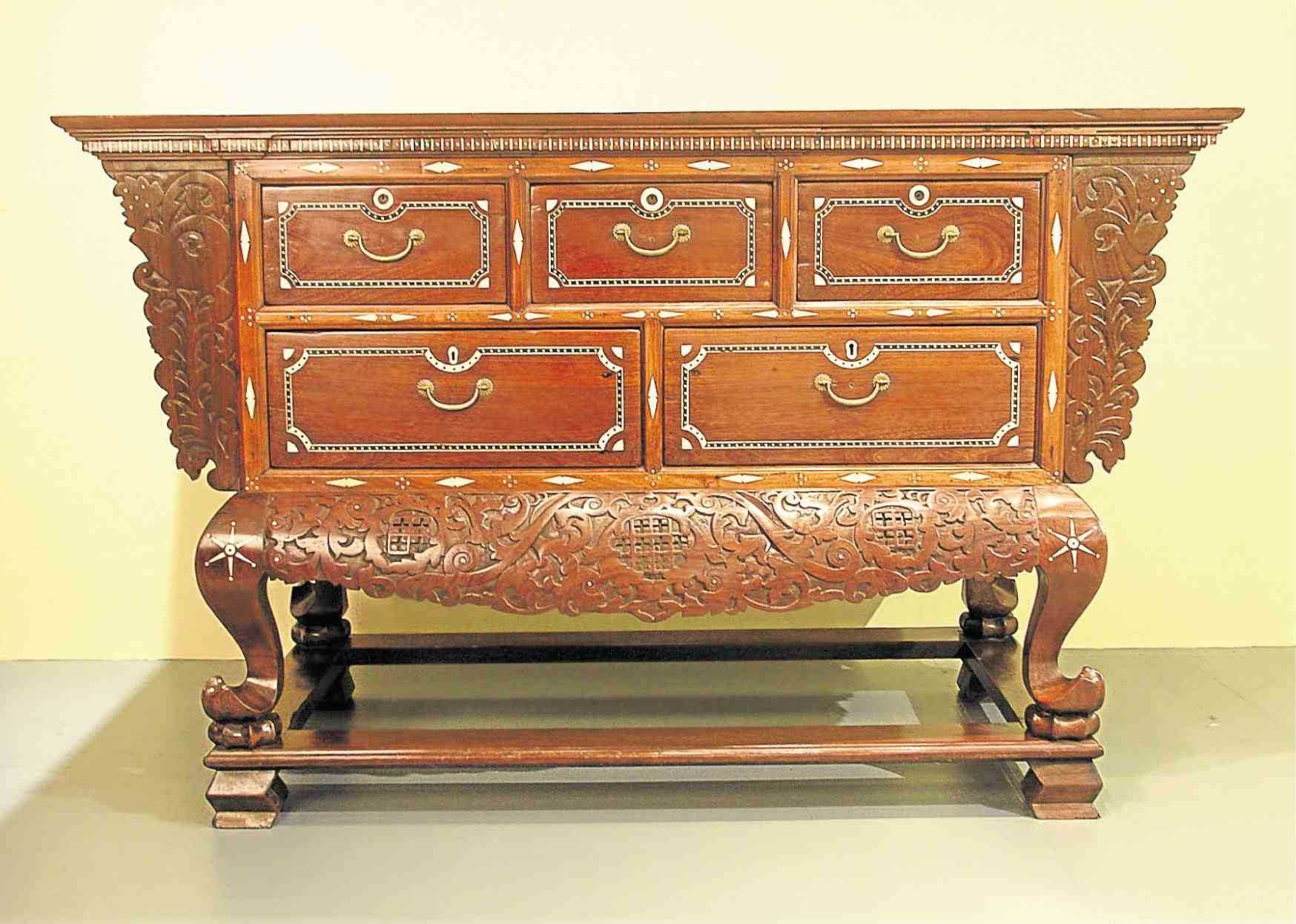 “Mesa altar” (19th century) is made ornatewith Bulacan’s signature carabao bone inlays. “Kamagong” or Philippine ebony adorns the borders on the drawers. The aprons and wings are adorned with rococo patterns of flowers, leaves and vines. The claw feet rest on the squash-shaped base.

A rare collection of mesas altar or domestic altar tables, once owned by a society grand dame, is a highlight of an exhibit-sale of appraised art, antiques and other rare objects on display until today, Oct. 29, at the Hernandez Room of the Peninsula Manila.

The collection, part of The Nonesuch Fine Collectibles and Rarities fair, is the legacy of the late collector and arts patroness Marie Therese Lammoglia Virata, or Bebe to friends.

Last March, Virata’s 82-lot collection of Oriental furniture was sold for $25.3 million at Christie’s in New York. The proceeds went to charities and to a future museum that will display her extensive collection.

Virata was born to affluence on Dec. 19, 1923. Her father, Umberto Lammoglia, was an Italian émigré who owned El Meridien, a famous jewelry store in Escolta.

While studying at St. Scholastica’s, she got close to Carmela Crisologo, who later became Ilocos Sur governor. Crisologo brought her around the ancestral homes of her hometown, Vigan, where Virata cultivated a taste for antiques.

She married economist-banker Leonides Virata, who encouraged her to expand her collections to include Oriental art. She moved in the circles of society doyennes Consuelo Madrigal and Conchita Sunico and collectors Luis Araneta and Arturo de Santos. With her unerring eye, she served as patron to   furniture designer Ernest Cornell and floral designer and decorator Ronnie Laing.

In New York, she was friends with the philanthropic Rockefeller family and Robert H. Ellsworth, an expert on Asian art who catered to the Park Avenue set.

An aesthete, Virata was the only woman to join the tight circle of the Filipiniana Book Guild, which published resource books on local arts, history and culture.

According to José Panlilio, director of Museo De La Salle, Virata sealed her reputation in the art and culture circles through her sponsorship of the excavations of ancient pottery in Calatagan, Batangas, and Sta. Ana Church in Manila.

She further enhanced her knowledge of Filipiniana furniture in the company of the late scholar-jeweler Ramon Villegas and antiques experts Ma. Cristina “Kit” Roxas and Alex Ayco.

In her final years, the bedridden Virata limited her visitors to close friends Panlilio, Villegas and cultural historian Ambeth Ocampo. She died on July 18, 2015, after a lingering illness.

Many of her antiques are under the care of her son, Luis, a leading business figure himself.

Edwin Esguerra of Osmundo Furniture Gallery, who described the hardwood furniture, said it’s difficult to peg the costs because it can run from P500,000 to eight figures.

The mesa altar was made of balayong or Palawan cherry tree, with narra as support.

The Bulacan table has a carabao bone inlay. The Batangas pieces are simpler in design.

The most intriguing piece is the 18th-century sakang (splayed) table, said to be of Oriental influence.

Martin Tinio, an expert on heritage homes, gold and silver, said the altar tables were referred to as “una mesa,” a table. The term mesa altar was coined in the early 20th century to denote such objects  found in  prayer rooms of homes and convents.

One of the challenges he cited is the sparse information and research available on antiques.

“If an antique sells for P12 million at auction, you ask why. What is the real value of the piece?”

Manalo included three altar fronts, applied with repoussé, a metal working technique, to complement the collection. Silver was imported from Mexico and shaped by Filipino craftsmen.

Scholars attribute the basic structure of the mesa altar to the Ming Dynasty table, but the language of ornamentation exhibits Western influence.

He also pointed out the value in expert reproduction of such pieces. “A high-quality reproduction is authentic, because the knowledge of how it’s made is still intact.”

Manalo said that with such art fairs as Nonesuch, more people would be exposed to arts and culture appreciation.

“Where else will you have this big assembly of connoisseurs and rare pieces and show them to the public? This democratizes the world of antiques.”

The Nonesuch Fine Collectibles and Rarities ends today at the Gallery of Peninsula Manila.