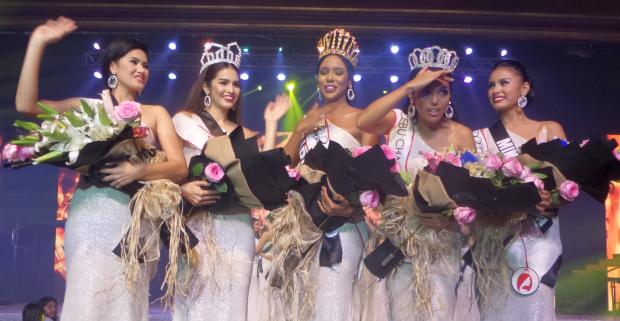 College student crowned as first Binibining Cebu on her birthday

CEBU CITY — A student from the University of San Carlos got a special gift for her birthday when she was proclaimed the winner of the inaugural edition of the Binibining Cebu pageant staged at the Waterfront Hotels and Casino here on Saturday night.

Apriel Smith of Badian, who turned 22 when the contest ended early Sunday morning, bested 53 other representatives from the towns and cities of Cebu province.

Two more queens were crowned in the ceremonies hosted by the father-and-son duo of Edu and Luis Manzano.

Rounding off the court were Ingrid Gerodias of Mingladilla and Kathleen Lendio of Danao, who finished first and second runners up, respectively.

The Binibining Cebu pageant was presented by the Bb. Sugbu Charity Foundation Inc., in cooperation with the Sacred Heart School for Boys Batch 1985 Foundation Inc.

World-renowned furniture designer Kenneth Cobonpue designed the stage, while fashion designer Cary Santiago designed the evening gowns and the crowns. Both of them are pillars in the Cebu art and fashion scene.

The winner will serve as an “ambassadress of Cebu” who exemplifies the modern Cebuana. /atm