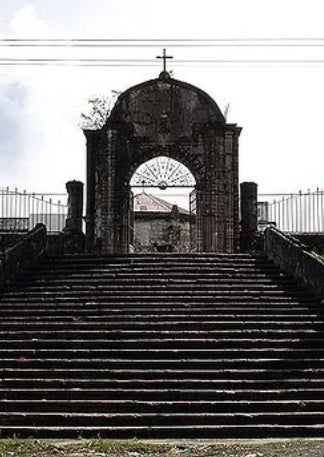 Described as the country’s most artistic at the time of its inauguration in 1884, the cemetery of Janiuay town in Iloilo province is the most monumental and perhaps the grandest Spanish-era cemetery in the country. This despite its present run-down state of conservation.

Nevertheless, it is still a sight to behold with its three grand staircases leading to corresponding arched portals with one at the center that leads to the octagonal shaped mortuary chapel.

The cemetery was built by Fr. Fernando Llorente, the town’s parish priest from 1874 to 1888, in a mixture of architectural styles and elements from Greco-Roman to Renaissance.

Its walls with blind niches are ornamented with Greco-Roman with Renaissance elements while the stone railings of the stairs have bas-relief in the Renaissance style.

The cemetery also used to have 16 religious stone statues on pedestals located in front following a theme of final judgment. These statues were said to be destroyed during World War II.

Aside from the sculptural pieces, a Byzantine-type seven-foot tall stone cross used to stand at the vicinity of the main gate. The reason for its loss is unknown.

The capilla or mortuary chapel located at the center of the cemetery is of neo-Gothic style with Byzantine walls and columns, the latter being pointed and extends beyond the edge of the roof is also of neo-Gothic form, same with the door and windows with stone tracery work.

Church art historian Fr. Rene Javellana, SJ, described the chapel’s dome and the three gates which used a Roman arch with a semicircular arch above as Romanesque or Baroque.

“But since Janiuay was built after the Baroque era, the safest choices are to call the style ‘eclectic’ but then that might sound negative; better ‘Revivalist,’” he said. Revivalist, he added, since the older European architectural styles such as Romanesque, Gothic, Renaissance, Baroque were revived in the 19th century and called “neo” or “new.”

Javellana said the correct description for the Janiuay cemetery gates is “neo-Baroque,” since these were constructed in the Baroque revivalist style.

The Janiuay cemetery is one of two monumental Spanish-era necropolis in Iloilo province—the other one being the San Joaquin Camposanto, declared a National Cultural Treasure by the National Museum in 2015.

San Joaquin Camposanto has been hailed for its present state of conservation, marred, however, by a treasure-hunting activity involving its previous parish priest.

Sadly, in contrast to San Joaquin, Janiuay’s has been subjected to the elements and to human neglect across time.

A declaration from a national cultural agency and a concerted effort from its residents, local government and the Archdiocese of Jaro could bring back the glory of this imposing, impressive national treasure. —CONTRIBUTED