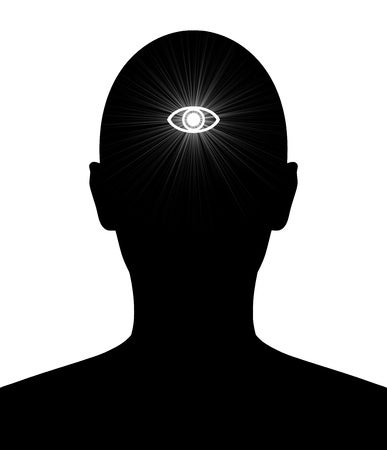 The Chinese believe that folks who have yin yang eyes, also known as “the third eye”, can see ghosts and spirits. They believe that a female is yin and a male is yang, so women are more likely to see paranormal beings.

In Chinese metaphysics, people whose Bazi (Chinese astrology birth chart of year, month, day and hour) are lacking the Fire element (either at minimum or none at all) and born in the autumn/winter months (Aug 8-Feb 3) are more likely to see supernatural things, says Malaysian feng shui master Jessie Lee. Meanwhile, folks whose Bazi has all yin elements are more likely to encounter spectres and phantoms.

Zhong Kui, a figure of Chinese mythology, is said to have thick eyebrows but strong eye energy. Little wonder he’s the vanquisher of poltergeists and evil creatures, and can command 80,000 demons too. In fact, some Chinese regard him as a guardian spirit.

“These people are more sensitive to the energy of (spirits) from the other realm,” Lee adds.

The energy in folks with yin yang eyes to connect with paranormal beings can grow stronger or weaker over time. Lee says some women’s connection to the supernatural gets weaker after childbirth because children strengthen their elements. Also in Chinese metaphysics, our luck pillar changes every decade.

Hong Kong feng shui master Peter So Man Fung (The Enjoyment Of Face Reading And Palmistry) also gives examples of folks most likely to be haunted by phantoms and spooks. People with squint eyes, eyes with “low spirit look” (looking sleepy or drunk) and lack vital qi energy may encounter unearthly spectres. The same goes for those with thick eyebrows or eyebrows growing close to the eyes.

Folks with a “weak gaze”, however, are just “cowardly” and “tend to create demons in their mind”. People with small mouths are also deemed to be nervous and fainthearted, and their fears will suppress their positive yang energy.

For folks who want to be rid of the ability to see dead people, Lee says that some Buddhist monks, Taoist masters and temple caretakers can help.

“They will sprinkle sacral water on the person and dab the water on the forehead between the eyes to seal the third eye,” Lee explains. “The effectiveness of the ritual depends on the power of the third eye and the spiritual capability of the spiritual master.” For those who can see ghosts since childhood, the power of their third eye is very strong, she adds, and that may take some time “to close or seal”.

So how does on save themselves from these supernatural entities? Lee says, “You don’t have to save yourselves. The ghosts can’t harm you but trigger fear in you due to your insecurity.”

While it’s a traditional practice for Chinese Taoists to flock to temples or worship their ancestors at home for protection against evil spirits, some Chinese offer roadside prayers and offerings to lost souls that have no descendants.

“They are actually appeasing the spirits so that they don’t have to fight for food to survive. Such acts remind one of one’s physical being. It is also good for a person’s well-being to balance one’s emotion and helps to calm the mind,” Lee says.

“It is a time for healing and yoga exercises,” Lee adds.

Some say a dog’s, cow’s or bird’s tears can help you see otherworldly creatures.

“There are some Taiwanese practices in which the eyeballs of a bird (example, a rooster) or a cow are dried with incense. The eyeballs are then crushed into powder and added with the tears from a cow or black dog, then placed on the eyes like an eye mask. Some people also use octopus eyes because they have a large spectrum of colours,” Lee says.

However, these are just purported physical methods for opening the third eye. You also need to recite mantras and work on your subconscious mind, focus and concentration to connect with beings from another realm. But Lee warns, “Why would you want to open your third eye? If we can’t even handle our lives in this world, don’t dabble with the other world!”