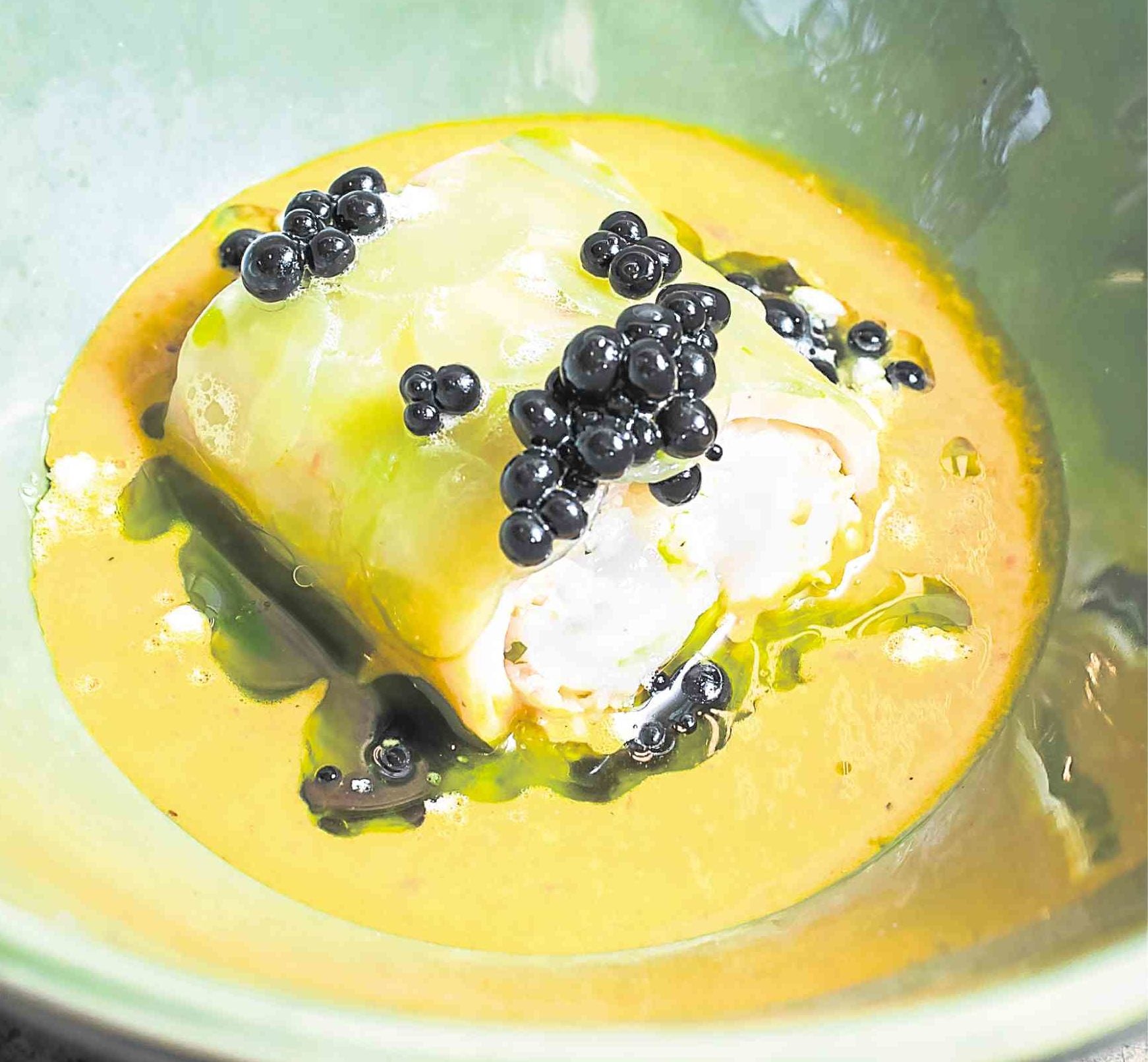 They say that nothing brings people together than good food. And so, in celebration of the 31st Association of Southeast Asian Nations (Asean) Summit, here are some of Manila’s noted chefs reimagining the participating countries’ national dishes.

Nicco Santos’ restaurants, Your Local and Hey Handsome, are a testament to his familiarity with Asian flavors. It’s no mystery that he has converted something straightforward like laksa into an elegant dish with components that surprise—squid ink turned into pearls, cucumber compressed to take the shape of small discs, shrimp made into supple noodles.

Though different in form, the flavors remain close to the original—a feat many fail to achieve, but which Santos does with ease.

To make prawn noodles, puree 500 g prawns, then mix with 8 g agar-agar and 2 g salt, then blend again until smooth. Seal in a vacuum bag and flatten mixture. Cook in a sous vide machine at 54°C for 3 minutes. Cut into desired shape.

To assemble, poach a river prawn in melted butter for 3 minutes or until cooked. Stuff it on the cheong fan. Place on plate on a pool of laksa cream. Layer cucumber, dust Kaffir then place citrus caviar on top.

Santos also loves to play around with textures, as shown in his version of nasi lemak—a dusting of Kaffir lime powder here, a quenelle of nasi lemak glutinous rice there, a pool of deep emerald-color cilantro sauce elsewhere. To round up the ensemble, he makes onion and tomato sambal crisp and peanut and dulong shard since, he said, “there’s no more fried element and I want it to still have some crunch.”

To make beetroot powder, boil 100 g beets until soft. Pat dry and place in a dehydrator for 6 hours. Blend and strain until powdery in texture.

To make dilis and mani crisp, melt 250 g isomalt, then, while hot, sprinkle 50 g fried dilis and 50 g mani on top. Place in a hand blender until it turns into powder. Place on top of isomalt, and into an oven at 150°C for 2 minutes. Let rest and chill.

To assemble, blend 20 g lemongrass, 10 g red onions, 10 g turmeric and 8 g ginger until pasty. Place 1 piece duck breast in a sous vide bag with lemongrass paste. Vacuum for at least 30 seconds, then cook sous vide at 56°C for 2 hours. Pan dry duck until skin is crispy. Place a pool of cilantro sauce on a plate. Put coconut rice, followed by the seared duck, layered crisps, then dust with Kaffir and beetroot powders.

Chef Francis Lim is pretty knowledgeable and eloquent when it comes to food from Thailand. Not only did he study the cuisine and worked in People’s Palace and Benjarong restaurants, he also has been cooking delicious curries and noodles at his own food joint, Nav. His pad Thai is exactly how you’d have it in the streets of Bangkok, but this, his reinterpretation of the dish, comes plated like an instant noodle composed of cooked wheat noodles, satay oil, a thick tamarind sauce, crushed peanuts, crumbled chicken skin and homemade shrimp powder.

To make dried shrimp powder, season 50 g shrimp with salt. Fry in oil until crispy. Let cool. Place on a flat tray and leave to dry. Once dry, place in a mortar and pestle and ground to a semi fine powder. Set aside.

To make chicken peanut powder, season 50 g chicken skin and deep-fry until crispy. Place on a flat tray and leave to dry along with 50 g dry roasted peanuts. Once dry, place in a mortar and pestle and ground to a semifine powder. Set aside.

To assemble, boil 200 g wheat noodles as per cooking instructions. Strain while hot, then mix in the tamarind paste and powders. Top with fried egg and douse with sriracha, if desired.

Typically, this classic Khmer dish is steamed and served on a banana leaf. But Lim’s creativity takes things up a notch by dividing it into its components and presenting it in a more palatable and appetizing manner. The result is beautiful—a mound of orange-hued spicy fish curry sitting on coconut gel—and the taste cleaner and more distinctive.