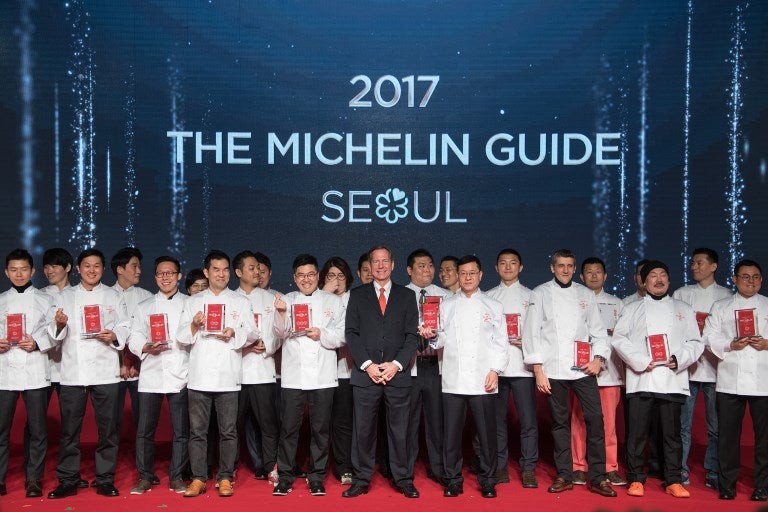 Michelin released the second edition of the Michelin Guide Seoul at a press conference at Signiel Hotel in Seoul Wednesday, awarding the coveted Michelin stars to a total of 24 restaurants.

Two new restaurants joined the ranks of the two-star eateries – Kojima-Sushi and Jungsik, a modern Korean restaurant– while Gotgan and Kwon sook soo renewed their two-star status, bringing to total of two-starred restaurants in Seoul to four.

“This year’s Seoul edition revealed how dynamic and exciting Seoul has become as a dining scene. There is a lot of culinary talent here,” said Michael Ellis, international director in charge of the Michelin guides.

A total of 18 restaurants were handed a coveted single star, of which four are new – Exquisine, Dosa, Jook Ok, and Table for Four.

While restaurants that earned three and two Michelin stars specialise in Korean food, whether traditional or contemporary, except for one, Kojima-Sushi, the offerings at one-star restaurants are more varied.

Balwoo Gongyang serving Korean temple cuisine was also given a one-star. French restaurants are represented at the one-star level by L’Amitie and Votre Maison while Dining in Space was recognised for its French contemporary cuisine.

Inspectors from several countries, including South Korea, were involved in the selection of the restaurants.

“They are full-time, salaried Michelin staff,” said Ellis in describing the food experts that have restaurateurs and chefs around the world on edge as the time for the unveiling of the annual list draws near.

“The quality of the Michelin-starred restaurants are consistent around the world,” said Ellis. In addition to the Michelin star restaurants, this year’s Michelin Guide Seoul includes 48 restaurants that were awarded Bib Gourmand, a distinction given to establishments offering a quality menu for 35,000 won and under. Seventeen of the Bib Gourmand restaurants this year are newly awarded. These citations reflect the diversity of the local cuisine discovered by the inspectors.