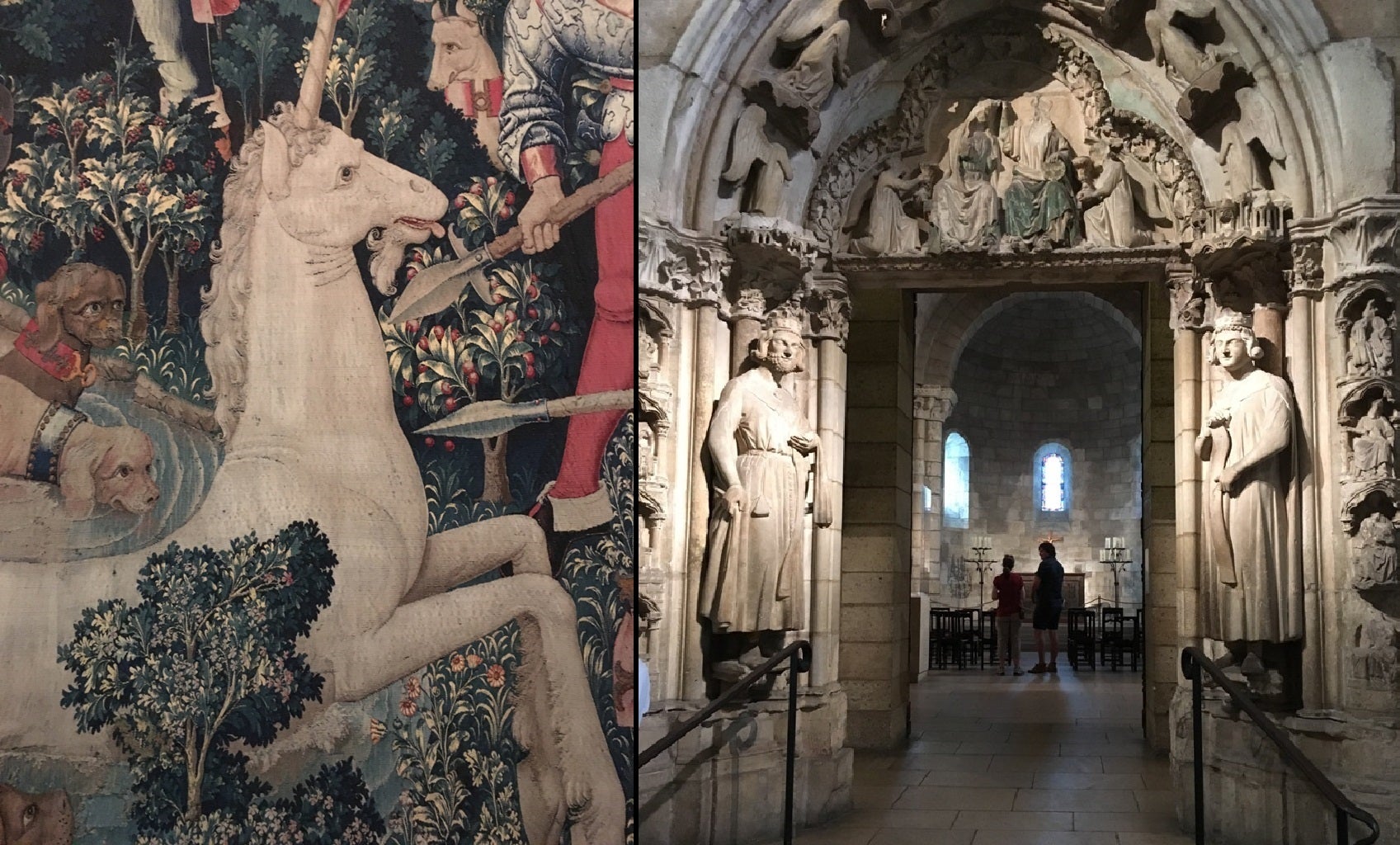 “The Unicorn is Attacked”; The Langon Chapel limestone, and doorway from an abbey near Dijon, France

It’s not that far from downtown Manhattan, but the half-hour ride on the A-train to the 190th Street Station and Margaret Corbin Drive might as well be transporting you to another planet.

Because of this distance, the Met Cloisters, the branch of the renowned Metropolitan Museum of Art in New York dedicated to Medieval Art, is not as crowded or as noisy as its branches on 1000 Fifth Avenue (the massive main building) and Madison Avenue (the Met Breuer, home of contemporary and modern art).

The Cloisters, in fact, couldn’t have been more appropriately named. A cloister is defined on the museum website as a walkway between monastic structures, usually winding around serene, open courtyards. The museum is comprised of several such peaceful pockets.

The Cloisters sits in Fort Tryon Park, with splendid views of the Hudson River. It had its beginnings as the collection of American sculptor George Grey Barnard, who opened the first iteration of the museum.

In 1924, John D. Rockefeller Jr. donated the $700,000 that allowed the Met to purchase Barnard’s collection. Three years later, the tycoon also gave the museum the land to create the park, helped build the new museum, and donated several pieces from his own collections, including a crown jewel of the Cloisters, the Unicorn Tapestries.

Today the museum is home to some 5,000 works of art from the Mediterranean and Europe, mostly from the 12th to 15th centuries.

What’s interesting about the building, though, is how it was built with stones from various historic sites—mainly, four European cloisters—which were excavated, shipped to the United States, and painstakingly reassembled under the direction of architect Charles Collens.

These cloisters were Cuxa, Bonnefort and Trie in southwestern France, and Saint-Guilhem in southern France, which date back as early as the 9th century.

Approaching the Cloisters is like coming upon a holy place of ancient stone, sitting on a hilltop amidst greenery.

Inside, it is quiet, with the lighting subdued to create an almost meditative mood. Immediately accessible is the Langon Chapel, a sparse Romanesque space built with limestone from the Church of Notre-Dame-du-Bourg near Bordeaux, and dating to 1126.

Almost contrasting with the simplicity inside is its eye-popping doorway, circa 1250, also made of limestone and paint, found in an abbey near Dijon, France. The first two Christian kings of France, Clovis and his son Clothar, flank this entrance, attended by various religious characters.

From one of the main cloisters, Saint-Guilhem, are columns richly carved in marble and limestone with ornamental, organic forms by unknown sculptors commissioned by churches in the 11th and 12th centuries.

The Pontaut Chapter House, meanwhile, was built near the Cuxa cloister as a meeting place for monks and nuns, where they sat on stone benches to read religious books or discuss other concerns. This remarkably preserved area was later used as a stable—the hooks to which horses were tied are still there—before it was bought and became part of the Cloisters.

The Gothic Galleries display some breathtaking stained glass windows that filled the large churches during this “age of cathedrals.” The property of glass that allowed it to transmit light without breaking, the museum annotations point out, was, in medieval times, symbolic of how Mary remained a virgin even as she gave birth to Jesus. A beautiful Annunciation scene, made of pot-metal and colored glass with vitreous paint, circa 1290-1300, was found in a convent church near Wetzlar, Germany.

Among the small masterpieces is what the museum labels “one of the most sumptuous manuscripts to have come down to us from the Middle Ages,” the “Belles Heures” (“Beautiful Hours”) or private devotional book of Jean de France, Duke of Berry, created by the famed Limbourg Brothers in Paris between 1405 and 1409.

Beautifully handpainted in tempera, gold and ink on parchment, it features stories of figures of the church, including full-page illuminations (as the illustrations were called) of St. Catherine of Alexandria.

Robert Campin’s oil-on-oak “Annunciation Triptych” (also known as the “Mérode Altarpiece”) from Belgium, circa 1427-1432, is a famed example of Nederlandish painting, showing delightful detail and the rich colors for which these artists were known.

As pointed out on the guided tour, one sees the convention of the time in the rightmost panel, showing St. Joseph in his workshop. The scene behind him, however, shows not Bethlehem, but some typical Belgian streets, complete with church spires (in a time supposedly long before the Crucifixion) and people in period attire.

In between galleries, one can visit lovely gardens, including the Bonnefort Cloister Herb Garden, which contains more than 250 species of plants and herbs—including poisonous varieties, properly identified—cultivated in the middle ages. A delightful sight is a pear tree, beautifully espaliered—an ancient gardening technique that means coaxing a tree’s branches to turn this way and that by fastening it to a wall.

Finally, I came upon some highlights on my bucket list, secured at the Cloisters in a special room with controlled illumination and temperature. The seven huge, mystical Unicorn Tapestries—they were meant to be hung in castles, after all—were believed to have been woven in Belgium of wool, silk, silver and gilded silver-wrapped thread, giving the surface of the densely woven material an otherworldly sheen.

Believed to be dated as early as 1495, and bequeathed by Rockefeller to the museum in 1937, they depict a hunt for the mythical one-horned white horse, complete with hunters, dogs, scores of other symbolic animal and plant species, and the mysterious initials A and E interwoven atop each scene—the patrons, perhaps, or the recipients of this priceless gift? The unicorn has long been considered a symbol for Jesus Christ, pure and sinless but willing to submit for the good of man.

In the audio guide, expert commentators talk about sitting for hours in this room, dimly lit to protect the tapestries, last restored in 1998. One can indeed gaze for hours upon these creations, filled with intricate detail and untold stories that we’ll probably never learn.

Woven for royalty to adorn great halls, they have survived centuries, a gift from a benevolent patron to an extraordinary museum, and to the world—a chronicle of a past as colorful and luminous as the tapestries themselves.