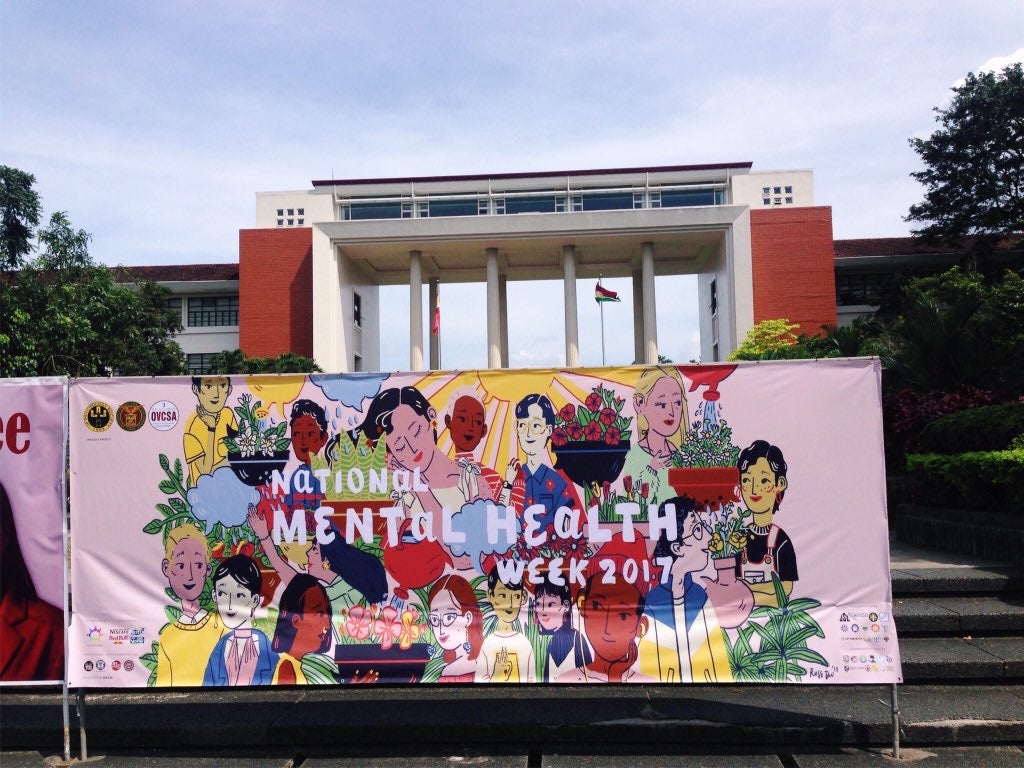 Mental illness is an issue that many Filipinos don’t fully understand. Either they feel uncomfortable when discussing, for instance, depression, anxiety and bipolarism, or they tend to stigmatize these illnesses— criticizing those who open up about their condition, calling them “OA,” or disregarding the seriousness of their condition.

It’s about time we change that.

For the past two years, the UP Psychology Society (UP PsychSoc) has been active in the celebration of National Mental Health Week, to help develop a deeper understanding of psychology and destigmatize mental health.

The UP PsychSoc has set organized seminars for psychological first aid, visited barangays for community counseling, invited Filipino psychologists for lectures, gained the support of Vice President Leni Robredo and drew the interest of Sen. Risa Hontiveros, who has attended its events.

This year, the UP PsychSoc advanced its mental health platform to concrete action, instead of just promoting awareness.

The UP PsychSoc National Mental Health Week team (of which I served as the academic project officer), with the help of the Office of the Vice Chancellor for Student Affairs, prepared a lineup of events from Oct. 24 to 27.

The week started off with “Headspace: A Mental Wellness Fair” at the Palma Hall lobby. Booths were set up for other organizations promoting mental health facilities and advocacies. These orgs ranged from support groups to professional institutions catering to the mental health needs of students.

Each booth had representatives from the orgs handing out flyers and information especially for students and faculty to avail of psychological services.

This was followed the next day with Recharge—a series of workshops on stress management. There was a yoga workshop, facilitated by Day Vergel of Erasthai Yoga Project. Yoga helps improve one’s coordination and concentration.

There was a mindful meditation workshop by Roderick Penalosa, a psychotherapist and life coach. He demonstrated breathing techniques and other ways to calm one’s mind.

The third day featured Recover, a “take-what-you-need” board containing quotes handwritten on colorful pieces of paper. The quotes’ various messages included: “Your feelings are valid”; “It’s okay to take a break today”; “Today I am grateful for all those who support me.”

Anyone could take a note from the board and bring it with them or give it to a friend who might need the message. This has positive effects on one’s mental health.

The fourth day was about Reconnect, a panel discussion that focused on how mental health issues are portrayed in media. While performing its job to keep people informed, media also has its shortcomings. Television series such as “13 Reasons Why,” as well as films like “Last Night” tend to “glamorize” depression and suicide.

Our goal was to correct misconceptions, help the audience recognize wrong depictions of mental health issues, and be aware of the ethical guidelines regarding such depictions.

The panel of speakers included Dr. Felicitas Soriano, a past president of the Philippine Psychiatric Association; Dr. Marc Reyes, faculty member at the UST Psychology Department; Jarvin Tan, director for research at Youth for Mental Health Coalition; and Randolph Longjas, director of “Star na Si Van Damme Stallone,” a film about a child with Down syndrome who wants to become an action star.

The discussion was moderated by Dr. Divine Love Salvador, assistant professor at the UP Diliman Psychology Department.

The speakers gave valuable insights. Longjas discussed how he cast an actor with Down syndrome to achieve an authentic performance. This was crucial in helping viewers understand mental health on a deeper level.

Mental health development has a long way to go in the Philippines. The UP PsychSoc National Mental Health Week encourages Filipinos to open their minds about the subject.

In the end, you realize you don’t necessarily have to organize big events to contribute to mental health awareness. Being there for people who open up about their problems, recognizing and validating their feelings are a good start.