First exhibit of Luna’s ‘The Death of Cleopatra’ | Inquirer Lifestyle 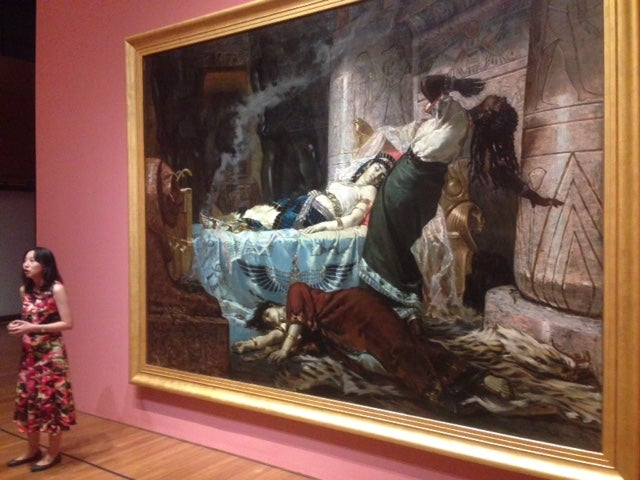 RARE DISPLAY Juan Luna’s “La Muerte de Cleopatra” (The Death of Cleopatra) and theworks of other renowned artists are on display at theNational Gallery Singapore’s exhibit “Century of Light,” which focuses on 19th-century art, from Nov. 16 to March 11, 2018. The gallery’s curator, Clarissa Chikiamco, briefs journalists about the show. —CONTRIBUTED PHOTO

First exhibit of Luna’s ‘The Death of Cleopatra’

SINGAPORE — The National Gallery Singapore (NGS) will open to the public on Thursday the largest exhibit in more than a quarter of a century of the life and work of Philippine patriot and painter Juan Luna.

Luna mastered Western painting techniques, won prizes and accolades in Europe and established his prestigious career there before going back to his homeland to work for the fledgling Philippine republic as a diplomat.

The last major exhibit on Luna was mounted in Manila in 1988 at the National Museum and Metropolitan Museum and it tackled his life and work along with those of his contemporary and rival, Felix Resurreccion Hidalgo.

The victory when he was only 24 years old signaled his rise as an artist from Spain’s only Asian colony, a promise that was more than realized when he won the gold medal from the same contest in 1884 for his most celebrated work, “Spoliarium.”

“Spoliarium,” depicting fallen Roman gladiators, and the silver medalist by Hidalgo, “Christian Virgins Exposed to the Roman Populace,” were heralded by the Philippine expatriate community in Madrid led by Jose Rizal as allegories of the country’s colonial condition but also proofs of Philippine genius flowering under Spanish tutelage.

“Luna and Hidalgo are as much Spanish glories as they are Filipino,” Rizal declared in the victory party thrown by the Filipino community in Madrid for Luna and Hidalgo.

But while “Spoliarium” was repatriated to the Philippines in 1958 and now holds foremost pride of place at the National Museum in Manila, “Cleopatra” stayed at Spain’s Museo Nacional del Prado, where it had never been exhibited.

Now the Prado has restored and loaned “Cleopatra” to the NGS for the latter’s important exhibit, “Century of Light,” which is focused on 19th-century art.

The exhibit has two components: “Colors of Impressionism,” consisting of works by Auguste Renoir, Claude Monet and other noted French impressionists from the collection of the Musée d’Orsay; and “Between Two Worlds,” an exhibit at the NGS’ SingTel Special Exhibitions Gallery, of the life and work of Luna and another 19th-century Southeast Asian artist, Raden Saleh.

“Saleh and Luna are two of the earliest and most significant artists who propelled the prestige of Southeast Asian art around the world in the 19th century,” said NGS director Eugene Tan.

Saleh (circa 1811-1880) was a Javanese who came from Batavia (Dutch East Indies’ capital city that corresponds to present-day Jakarta) and who went to the Netherlands. He received European training and was conferred the title “King’s Painter” by King Willem III. He’s known for his Orientalist paintings of Arabs and lions and other exotic animals.

This writer was given a preview and tour of the two exhibits by NGS officials on Nov. 13.

Luna’s “Cleopatra,” despite its exotic subject matter, is not an “Orientalist” work but a “Neoclassic” painting that depicted “classic” historical incidents and themes related to Greek and Roman antiquity.

Following the Greek historian Plutarch’s “Lives,” Luna depicted the Egyptian queen’s suicide at the moment of its discovery: dressed in royal regalia, Cleopatra had just expired, along with a maid who just collapsed on the floor and another, on the verge of falling down.

Barely seen at the foot of a pillar is the tail of a snake slithering away, which goes along with the popular lore that the beautiful royal had herself killed by the bite of a poisonous snake.

According to NGS curator Clarissa Chikiamco, Luna’s first major prize-winning work hewed close to the academic vogue at that time—“a preference for large-scale works” (the painting’s dimensions are 250 x 340 cm; though “Spoliarium” is much larger) and “highly theatrical works featuring historical events.”

After “Cleopatra,” the most notable Luna work in the Singapore exhibit may be the oldest and original version of “España y Filipinas,” made in 1884, now part of the NGS collection.

It will be displayed alongside the version most familiar to the Philippines, the circa 1888-1893 version from the collection of the Lopez Museum and Library.

Perhaps even more important than Luna’s allegorical paintings of the Philippines and “Mother Spain”—at least for art historians and scholars—would be Singapore’s exhibit of his latter works in realism—specifically another large canvas, “Las Ignores” (The Unknown Ones; 1890-1891), which depicts a funeral cortège, and “Avant-garde” (The Advance Guard; 1892).

“Avant-garde” depicts poor old working women sweeping the streets, so Luna might have meant the title to be both ironic and revolutionary.

The realist paintings, on loan from the Biblioteca Museu Victor Balaguer in Villanova, Spain, were done around the time when Luna was in Paris and having domestic troubles, which ended tragically when he killed his wife and mother-in-law. He was acquitted by a Paris jury in 1893.

During the Philippine Revolution of 1896, Luna and his equally controversial brother, Antonio Luna, were implicated in the Katipunan uprising, which they disowned.

They were later released on orders of the Queen Regent, Isabella. During the American invasion, Luna was sent by the fledgling Philippine republic to Europe to argue for Philippine recognition, but to no avail. Luna died of a heart attack in Hong Kong in 1899.

Russel Storer, NGS deputy director, said the works of Luna and Saleh on exhibit came from prestigious museums and collections “around the world.”

Aside from the Prado and Balaguer of Spain and the Lopez and National Museum of the Philippines, the Luna works came from the Ayala Museum, Bank of the Philippine Islands, Bangko Sentral ng Pilipinas, UP Vargas Museum, Paulino and Hetty Que Collection, and University of Santo Tomas Museum.