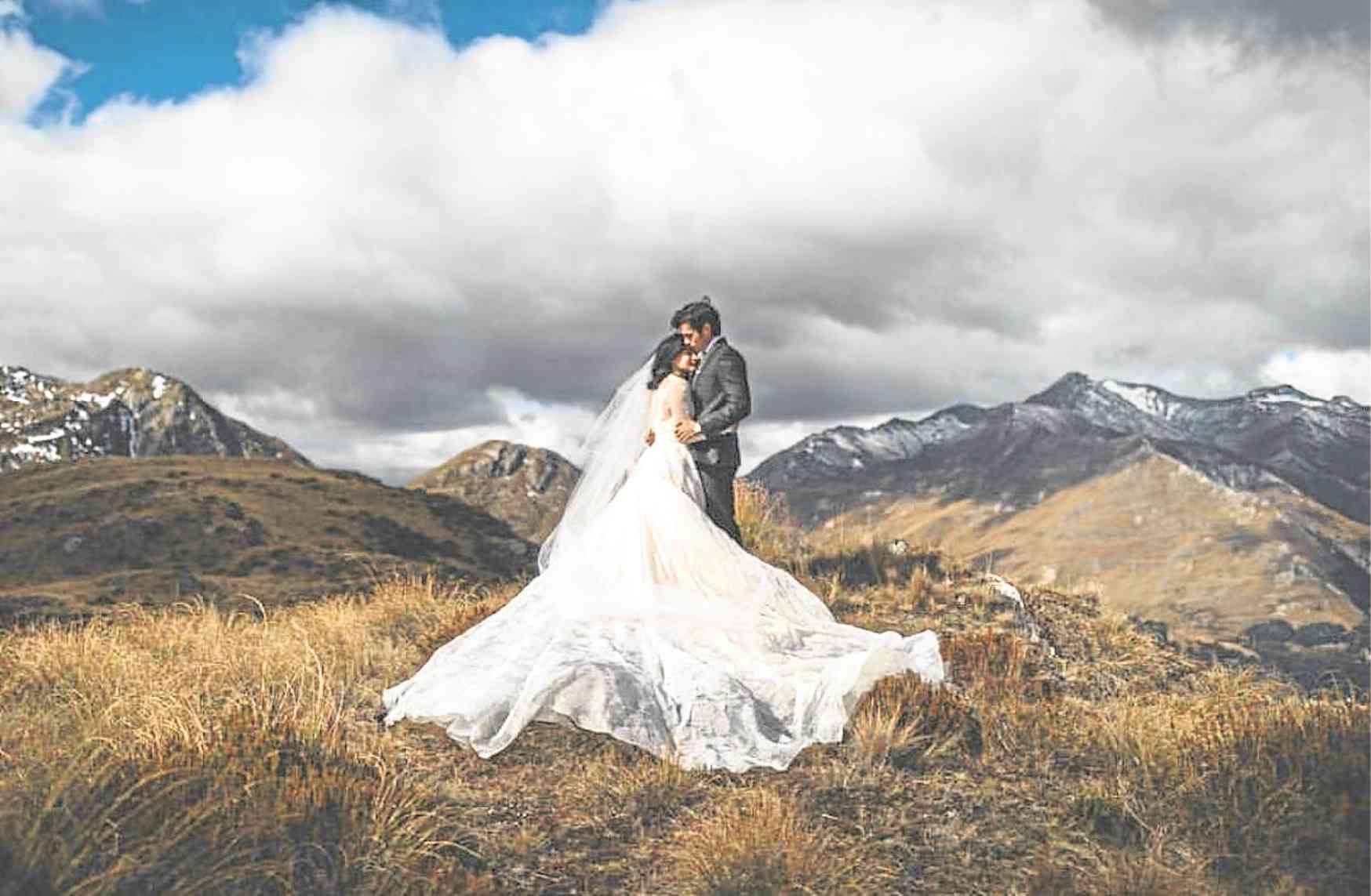 The newlyweds on the hills of Queenstown, photographed by local wedding photographer Jim Pollard

It was an unexpected choice, but showbiz sweetheart Anne Curtis and businessman Erwan Heussaff couldn’t have chosen a more picture-perfect locale for their hush-hush wedding last weekend.

Curtis, whose dad is Australian, and Heussaff, who’s half-French, picked a late-spring wedding in the picturesque resort town of Queensland in New Zealand’s South Island. The couple, who dated for seven years, announced their engagement late last year.

The outdoor wedding was held on Sunday in an orchard, with breathtaking views of the emerald waters of Lake Wakatipu and the alpine terrain beyond, still snowcapped at this time of year. (Queensland is known for outdoor adventures.)

Celebrity guests began arriving in Middle Earth—Oscar-winning Kiwi director Peter Jackson filmed the “Lord of the Rings” trilogy in various parts of New Zealand—days before the wedding, though they were clearly sworn to secrecy: in early social media posts, they were there on the pretext of a hiking trip.

By noontime Saturday in Manila (New Zealand is five hours ahead), the cat was out of the bag: guests started sharing photos of prewedding cocktails, everyone looking chic and chill on pillows and picnic mats in the gardens of the venue.

The wedding had a very intimate guest list of only the closest family and friends. It was very low-key, even if the bride is one of the country’s most popular actresses. It was proof that even public figures could pull off a truly private affair (which they’re entitled to), even in the time of social media, if they’re so inclined. (Fans and others who were left off the guest list have no reason to throw a hissy fit, however, since—thanks to social media—they got updates on their idol’s wedding in real time.)

The bride wore a white lace-and-tulle Vera Wang dress and, owing to the outdoor setting, paired it with white lace-up boots. She also wore black platform boots underneath her Monique Lhuillier wedding dress the next day. No stilettos.

Heussaff wore a tweed coat and a hat and sported hipster beard at the cocktails, while his bride wore long hair extensions.

For the wedding the next day, he was clean-shaven and Curtis sported a shorter bob. He wore a three-piece gray suit, reportedly by a French tailor. The groomsmen (and woman) wore burgundy.

Curtis went for a classic princess ball gown from the Los Angeles-based Lhuillier. The dress had a full lace skirt with sweetheart neckline and sheer long sleeves with lace appliqués. It also had a long train that fanned out dramatically for the formal photos. (On the wedding day, Curtis’ friend and stylist Liz Uy, who wasn’t present, posted a photo of the actress during fitting with the designer.)

For her “something old,” the actress-TV host wore an antique moonstone ring on her right forefinger, a gift from her dad on her 30th birthday. She had jeweler Janina Dizon restore and update the setting.

She carried a bouquet of red and white peonies and pink roses.

Robbie Piñera did Curtis’ makeup. She wore two shades of lipstick for the affair, ostensibly from her limited-edition bridal collection for BLK Cosmetics, of which she’s creative director. Raymond Santiago styled her hair.

The scene seemed quite dreamy and rustic amid the greenery. The remains of what appears to be an old farmhouse were the backdrop, the floral ornaments quite spare.

For the postwedding reception, held at the sprawling Walter Peak High Country Farm across the lake, Curtis wore another Monique Lhuillier, very similar to the first sans the stretch tulle sleeves. It sported a bustle.

The guests were ferried to the venue on TSS Earnslaw, one of the last Edwardian coal-fired steamships launched in 1912.