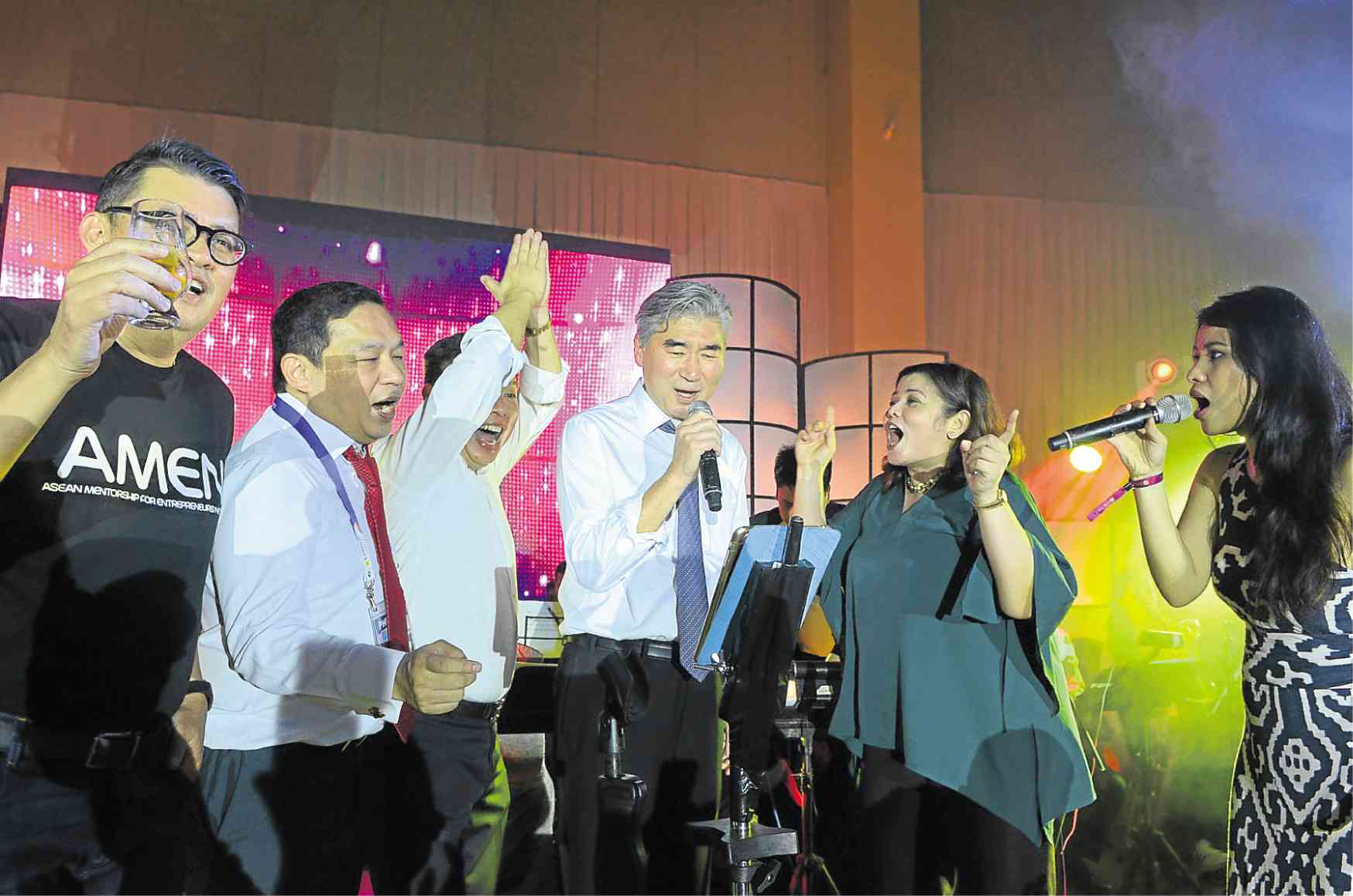 US Ambassador Sung Kim (with mic) tries his hand at sing-along at the closing party hosted by Abac chair Joey Concepcion (in black T-shirt) in Okada Manila. —CONTRIBUTED PHOTOS

Seamless is a word that Mike Miñana uses at work every five minutes.

Uniformed waiters who served world leaders and VIP guests at the special gala celebration of the Asean Summit hosted by President Duterte last week brought out entrees with their chests out, stomachs in and their movements perfectly timed as they put down bowls of steaming beef sinigang before the guests.

Dining tables inside the cavernous SMX Convention Center were spaced eight feet apart, while chairs facing away from each other had six feet between them so a waiter with a hot plate didn’t end up rubbing his hip against a VIP’s shoulder.

Miñana, one of the country’s top events organizers, left nothing to chance.

Tapped to oversee the service for guests at the gala dinner for Asean leaders and dialogue partners at the SMX last Sunday; cultural presentations of the Asean Business and Investment Summit (Abis) the days after; and the state dinner for Chinese Premier Li Keqiang on Wednesday meant he had to choreograph the movements, blockings, arrivals and exits of more than a thousand people.

The dramatis personae included not only waiters and kitchen staff in SMX but also dancers, singers and other musicians at Solaire, where the Abis meetings were held and Malacañang staff, security and other personnel were stationed while Mr. Li was there.

Throughout the Asean-related events that happened in Manila last week, people heard the word “seamless” from Miñana countless times.

“It was important to be seamless. I don’t want something so grand na ang gulo-gulo naman,” he explained.

“I made sure the waiters walked with military cadence. Even the lowering of the plates was synchronized, and all the guests attended to. Before the event, I told the waiters, ‘Kayo ang pambungad. You are the first entertainers,’” Miñana added.

At the opening ceremony for Abis activities in Solaire, seamless meant a guest who stepped out of his official vehicle was immediately greeted by a 70-piece marching band along the driveway. He then entered the lobby where ushers garbed in Filipiniana led him to a registration desk. A few steps away was a tableau of live models wearing national costumes of different Asean countries that presented the guest a photo-op while waiting for his security pass.

Two months earlier, Jose “Joey” Concepcion, Abis host and chair of the local Asean Business Advisory Council (Abac), was impressed at how Miñana used blown-up vignettes of local farming scenes as a rotating backdrop behind speakers at the Abac Agricultural Summit held at the SMX.

Miñana said Concepcion asked him to reprise the same concept at the Abis meetings that coincided with the Asean summit, “so you feel you are really in these places and not stuck in a room.”

“To soften each presentation, we used images of tourist destinations, business districts of each country and market scenes to capture the evolving business in Asean,” he pointed out.

For Suu Kyi’s speech, for example, Miñana provided a backdrop that showed the Myanmar Palace one moment, fabric vendors the next and office buildings later, while she talked to the delegates.

“This is also to show that the delegates are not only here to discuss business. The event also showed people meeting other people to make business work,” Miñana noted.

Of course, a Filipino-hosted event is not complete without entertainment.

Arriving guests were greeted by a lights-and-music show as they approached the hotel’s fountain area through the Crystal Promenade dining venue. The AMP Band played American standards, while entertainers from Club Mwah channeled Beyoncé, Jennifer Hudson and Tina Turner.

Things were more sober at the state dinner for China’s Li in Malacañang the day after.

After a feast of crispy fish skin, sliced suckling pig, hototay soup and Chinese-style beef tenderloin, a child performer wowed guests with an exhibition of his yo-yo skills while a choir sang “Pipit” in the background.

Soprano Rachel Gerodias followed with a “diva rendition” of “I Love You, China,” before tenor Arman Ferrer serenaded the guests as models wearing manton de Manila shawls sashayed down an impromptu runway.

Miñana said he thought of the yo-yo because it was a Chinese import during pre-Hispanic times that island natives later refashioned into a deadly weapon.

The manton de Manila fashion show, on the other hand, was a reminder of how intricately embroidered shawls imported from China later found their way to Europe via the galleon trade that took off from Manila.

“We gave the guests a taste of Filipino warmth and culture. We shared with them festive and warm productions with fiesta themes,” Miñana explained.

He added that the role of an event organizer in these occasions was to put “a sense of order and at the same time (employ) a different sense of creativity. Whether the event is business or social, the sense of creativity always has to be there. These are leaders and businessmen who have seen it all so (we had to think of) what else they have not seen.”

And, “it had to be seamless—that’s the most important thing.”