How to make that Thanksgiving turkey | Inquirer Lifestyle ❮ ❯ 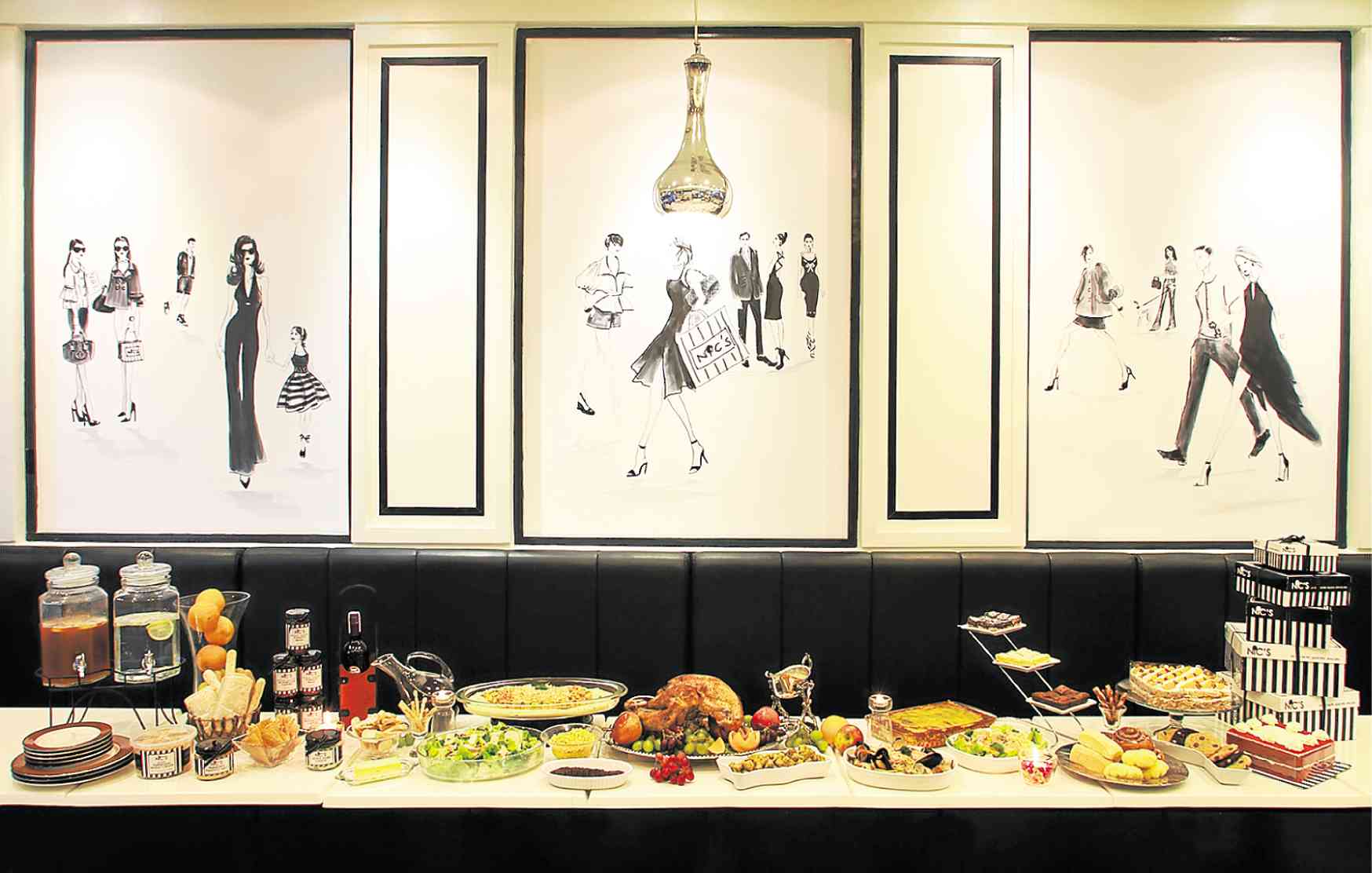 The Thanksgiving menu—an abundant spread from appetizers to dessert, with the turkey as themain course. The fashion illustrations pay homage to Rina Go’s former career as a designer.

How to make that Thanksgiving turkey

During the holiday season, the turkey from Nic’s restaurant and gourmet dessert place is in demand. It strikes the balance between perfectly done white and red meat. Glazed with lots of olive oil, the fowl is set on a hot and dry oven for crusty skin, resulting in a taste that is juicy, fatty, savory yet sweet. It comes with the traditional accoutrements of cranberry jelly, buttered corn and gravy.

“Preparing for a Thanksgiving gathering is always exciting,” says fashion designer-turned-restaurateur Rina Go. “Everyone looks forward to it, even the leftovers. Turkey is a treat compared to the usual roasts or carvings in a buffet table. Not everyone can make a perfect turkey.”

To her, the turkey is a necessary luxury, especially on special occasions. Making her signature turkey takes two days of preparation.

“I don’t baste it until it is completely defrosted. Otherwise the flavors won’t sink in. It practically takes a bath in olive oil,” she says. While the entire turkey is wrapped in foil, she adds an extra foil around the wings to keep the breasts from drying up. She removes the oil on the last leg of cooking.

The turkey is placed in a humid oven that leaves the meat packed with moisture, drenched with flavor. “The drippings are used to baste as the turkey is cooking. Then I mix it with chicken stock to make the gravy,” she says.

The roast turkey also harks back to memories of family bonding in the East Coast during Thanksgiving. Go recalls that the family’s traditional turkey was dry. When they moved to the East Coast in the ’80s, they had more time to prepare it themselves. Her sister, the late Maggie Go, had a friend who taught them how to make the perfect juicy roast, starting with the 24-hour marination of olive oil and herbs.

The family always prepared two turkeys to make for second and third helpings. Go remembers the aroma of the turkey wafting in the air.
Through the years, Go, the consummate hostess, has been creating a Thanksgiving/special occasion buffet which features the turkey as star attraction.

Her daughter, Nicole Thorp, uses the recipe of aunt Maggie’s East Coast Turkey. “The secret is to properly massage the turkey with the marination, and let it soak overnight to absorb the flavors. On the day of serving, it needs more massaging before being put inside the oven. Check up on it every hour until cooked and golden brown,” says Nicole.

Go designs a focused menu around the fowl. “I don’t like mixing cuisines. If it’s Japanese, I don’t combine the dishes with Filipino or Italian or Spanish food in the menu. The flavors of the dishes must complement each other,” she says.

Appetizers are a must, and are easy to prepare.

“When guests don’t arrive at the same time, so early birds do not get too anxious, I serve appetizers,” she says. “Parmesan wheat crisps are guilt-free.”

The crusty French baguette and soft whole-wheat ciabatta can be slathered with seven-herb cream cheese or parmesan-and-pimiento melted dip. The bruschetta, thinly sliced open-faced sandwich, can be filling.

Served in a wooden bowl, the Caesar salad with crunchy romaine and iceberg lettuces, shaved parmesan, homemade croutons and a choice of salmon or bacon is tossed with a dressing made from scratch, gradually poured with olive oil.

“That makes all the difference. Regular customers take notice and come back for that,” Go observes.

Guests have an option of either a tomato- or olive oil-based pasta. “I don’t use a cream-based pasta since my salad has a Caesar dressing with egg,” she says.

Nic’s lasagna is light yet indulgent, made with ground beef between layers of noodles, mozzarella and stewed whole tomatoes with a little help from onions. The lighter alternative is a medley of sautéed clams, shrimps and black Chilean mussels with pasta.

Go goes for an overload of protein and Omega 2 fatty acids. The baked salmon fillet is light pink and flaky, complemented by the richness of parmesan mashed potato and an array of seafoods.

Aside from turkey and salmon, the pièce de résistance are Nic’s desserts. The Red Velvet Cake is made more attractive with the contrast of snowy cream cheese icing. The Peach Walnut Torte is topped with peaks of frothy meringue and fluffy whipped cream.

Nic’s plays around with variations of oatmeal cookies such as the oatmeal fudge bar with creamy chocolate fudge; a thicker oatmeal cookie plumped up with chocolate chips; and oatmeal raisin with a crispy edge, a soft center, aromatic cinnamon and a generous splattering of raisins.

The lemon bar has a subtly-sweet, golden shortbread crust that sets off the lemon filling’s tartness.

For chocolate lovers, the double fudge bar is rich and sticky, but flaky outside. Another version of this cookie bar is topped with chocolate chips for an extra high.

Then there is the comforting familiarity of the soft breads such as the cinnamon sticks, cheese roll, butter bread with sugar and parmesan and parmesan ensaymada, made up of flaky sheets of crumbs.

Thorp adds that when she entertains, she enjoys interacting with guests. During a tacos night, she laid out a DIY bar of grilled meats, crispy fried fish, liempo and adobo flakes for toppings. In her Cuban-themed birthday, she created a tropical ambiance.
“Nicole’s entertaining style is modern. I stick to something traditional,” says Go. —CONTRIBUTED