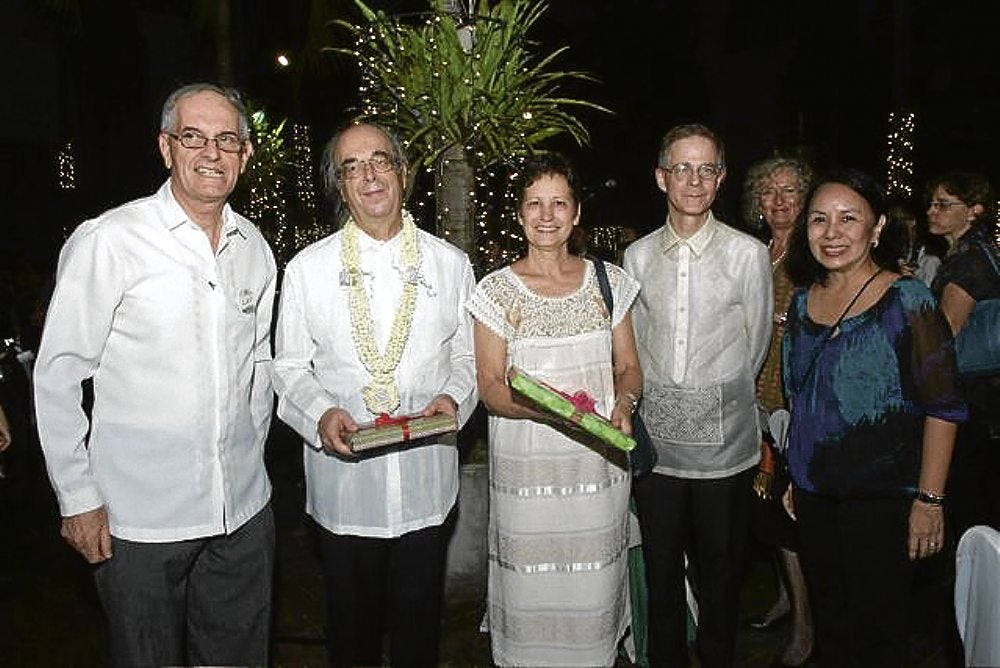 The country’s historic pipe organs are featured in the CD collection “Historical Organs of the Philippines,” performed and recorded by highly revered Swiss organist Guy Bovet.

The CD spotlights the over-a-century-old organs found in Bacong in Negros Oriental; Loay, Loboc and Baclayon in Bohol; the Las Piñas Bamboo Organ; and San Agustin Church in Intramuros, Manila.

An amazing opener on the repertoire played on the pipe organ of Bacong is an improvisation on the Philippine National Anthem. A refreshing sound compared to the somnolent, archaic and official version of the National Anthem, Bovet’s improvisation has everything that would revive patriotic fervor while also conjuring images of the country’s  colorful colonization.

The opening music also gave us an idea of this versatile pipe organ of St. Augustine of Hippo Parish Church in Bacong. As earlier research on this instrument showed, the organ was built in 1894 by the famous Spanish organ-builder company Casa Roques Hermanos of Zaragoza.

The organ lasted until the 1980s when termite infestation damaged its wind chest. The repair and restoration was initiated by the parish, the Bacong municipal government, and the National Commission for Culture and the Arts. The organ was fully restored in 2009 by the Diego Cerra Organ Builders headed by Cealwyn Tagle.

The musical breakthrough of this CD is the collection of Spanish music of the 19th century, which, according to Bovet, had been practically unknown until this collection came along.

We sampled another set of music this time from the pipe organs found in Baclayon.

Bovet played Carles Baguer’s (1768-1808)  Sinfonia I en Fa Mayor with four sections; and José Elias’s “Pieza Primera Cuando se Alza A Su Divina Majested” (1678-1755). There is an alchemy of enchantment when you hear sounds from the past played on an instrument which was probably an indirect witness of that era.

The Bohol organs date back to 1824 and 1896, and since they have many things in common, researchers have opined that there might have been an organ-building tradition on the island.

There are separate programs played on the Las Piñas Bamboo Organ and that of St. Augustine Church.

Putting together this excellent collection is a labor of love.

After discovering the potentials of the restored pipe organs in the country, Bovet set out to record music played on the historic instruments.

Work started last February and the recording sessions were not without problems.

But the good thing is that the Swiss organist and his party of organ consultants were well-received in the towns they visited for the recording sessions.

The most difficult part was the hundreds of hours spent editing the recording because of the noise (both natural and man-made).

“We would hear loud music from jeepneys, tricycles and motorcycles,” Bovet said. “One time we decided to record in the dead of night, and it fell on the birthday of the town mayor. We had to contend with karaoke music all night.”

Bovet said he hoped that through the CD, the Philippines would be educated on the importance of its historic pipe organs.

“We have to educate in order to make people understand those organs were part of the country’s musical legacy,” he said. “We also need to produce good organists. Of what use are those restored organs if we don’t have good organ-players?”

Proceeds of this CD collection sponsored by the Zuellig Building will go to the training and education of the country’s new batch of organists.

“What is uniquely appealing about pipe organs in the Philippine is that they are part of the country’s history,” Bovet said. “The earlier the Filipinos understand that, the earlier we can do something about the future of organ music in the country.”