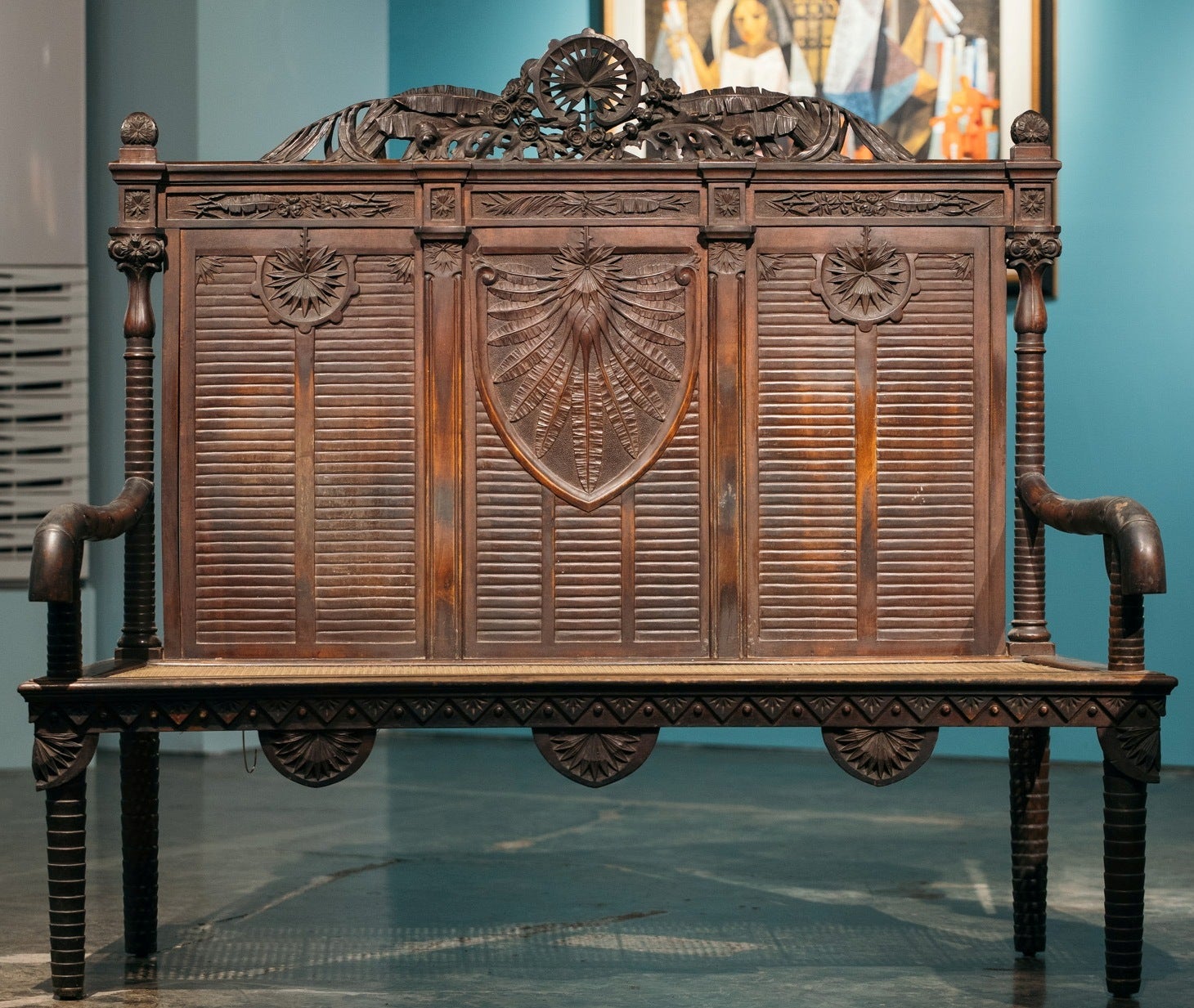 Among the objets d’ art that Leon Gallery will bid out during its annual yearend Kingly Treasures auction on Dec. 2 is the Maximo Viola-Isabelo Tampinco Settee, which is more than 100 years old.

The three-seater settee made from narra and rattan was produced in 1909.

Viola (1857-1933) is well-known in history books for having loaned Jose Rizal the money for the printing of “Noli Me Tangere.” He became a physician and, toward his later years, became a furniture craftsman.

But the settee to be auctioned was the work of Tampinco, the most famous sculptor and furniture maker of his time.

Tampinco (1850-1933) garnered many awards and prizes in international exhibitions in Philadelphia, St. Louis, Madrid and Barcelona.

He was principally known as a laborista, a carver of ornament, because of the doors, altars, ceilings and other decorations he made for the Manila Cathedral and the churches of Santo Domingo and San Ignacio in Intramuros.

However, he also did decorative carvings for private homes, like transoms, picture frames and even furniture. Later, he made statues of saints and angels in wood, plaster of Paris, concrete and marble.

At the turn of the 20th century, when Art Nouveau became fashionable, he created a uniquely Filipino style by incorporating native flora and fauna designs in his calado or pierced transoms.

His sinuous openwork and whiplash outlines in woodcarving abounded with the anahaw, areca palm, gabi or taro leaves and bamboo.

All of the hallmarks of the Tampinco aesthetics are shown in the Viola-Tampinco Settee.

“The settee stands on four feet carved in the shape of an inverted and truncated trunk of an areca or bonga palm emanating from a quadrant at each corner carved with a section of an anahaw leaf.

“The seat frame is edged with a cymatium molding and has an apron carved in front and at the sides with a serrated frieze of joined, upended triangles incised with diamond-shaped depressions that give an impression of stylized anahaw leaves. A boss is carved below the junction of each triangle, while three semicircular appendages equidistantly attached to the bottom of the front apron are carved with an anahaw leaf. The seat is caned in one piece.

“On either side of the settee are realistically carved bamboo arms resting on an arm support consisting of a short, truncated areca palm with a quadrant support on the inner angle carved with part of an anahaw leaf.”

The S-shaped arm, carved like a bamboo trunk, curves forward and tapers as it curves upwards to connect to the upright back stiles. The stiles, carved in the shape of an attenuated areca palm, has a crownshaft terminating in a stylized ionic capital consisting of a small anahaw leaf on a thorny stem at the center flanked by an ionic scroll. 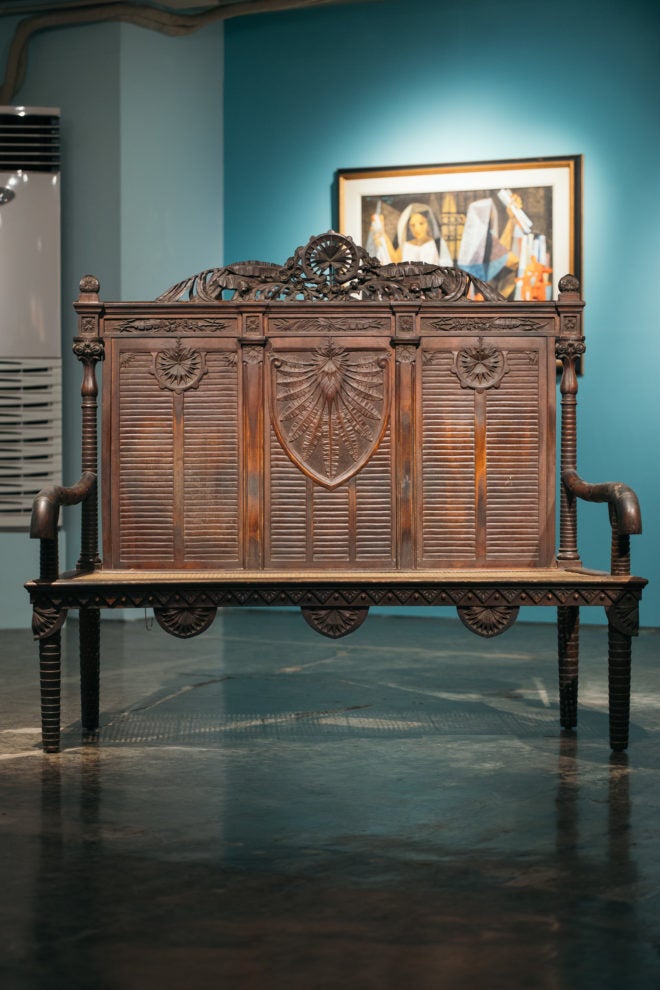 “Between the back stiles is a wide solid narra plank with a tripartite partition, separated by stylized pilasters with molded vertical edges and a capital in the form of an inverted anahaw leaf. The backgrounds of the panels are carved with horizontal lines that give the impression of window persianas. The side panels have a narrow vertical slat in the middle with a small anahaw leaf carved at the top and tiny quadrants at the upper corners carved with tiny anahaw leaves.

“The central panel, divided into three by two vertical slats, is overlaid with a shield-shaped reserve carved with an inverted clump of traveler’s palm leaves emanating from an anahaw leaf.

“An entablature above the posts and backrest is carved with a small anahaw leaf with a thorny stalk on the block above the pilasters and a frieze of a coconut frond, a banana leaf and bamboo twigs tied at the center with a ribbon, both on an entirely stippled ground.

“The cymatium molding above the corona is topped with a beveled edge. This is surmounted by a wide crest consisting of a large spray of roses realistically carved in the round and topped by an acroterion superimposed with an anahaw leaf. Symmetrically arranged on either side are realistically carved jungle ferns, coconut fronds and banana leaves.

“The settee seems to be entirely the work of Isabelo Tampinco and was completed in 1909, as attested to by the date carved at the rear of the backrest. ”