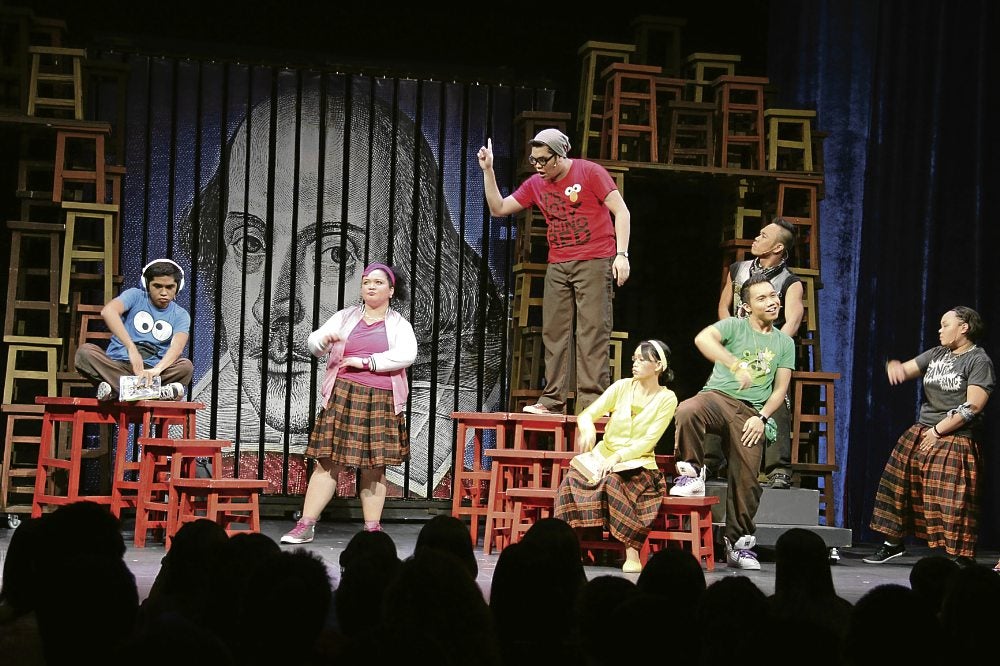 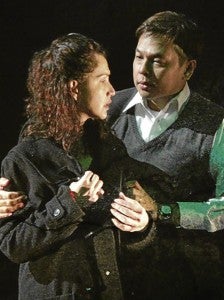 In a year that was largely more of the same—that is, like last year, ruled by musicals, the plays barely making comparable buzz—the biggest and most significant developments in local theater happened mostly offstage.

Avellana, 70, an eminent actor-director-producer, was the scion of two National Artists for Theater—Lamberto Avellana and Daisy Hontiveros-Avellana (at 94 this year, one of the last remaining links to the dawn of modern Philippine theater in the 1930s). His last production was the 2009 Repertory Philippines revival of Nick Joaquin’s “A Portrait of the Artist as Filipino,” which he directed.

Bernal left local theater an indelible legacy with his trailblazing, decades-long body of work on scenery and costumes for plays, musicals and ballet performances. This year, he designed the costumes for Tanghalang Ateneo’s “Sintang Dalisay” and was working on the design of PETA’s planned “King Lear” before he succumbed to cardiac arrest. He was 66.

News of these two important departures, however, couldn’t hold a candle to the one issue that generated the most spleen and controversy not only among theater folk, but also among everyone else equipped with a modem and a Facebook or Twitter account.

It took the clumsy joke of a tyro indie filmmaker, about the desirability of hiring theater actors for indie film projects because “you can feed them cat food,” for theater practitioners of all stripes to rouse themselves into a state of indignation unlike anything that had been seen before by a country quite oblivious to the challenges and hardships of an art form and industry largely marginalized by the pop mainstream. 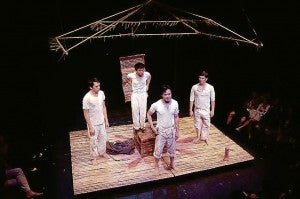 The too-close-to-home remark did have a positive effect. It spurred a group of theater practitioners to gather with their peers and form their own guild, something that had been absent all these years when theater groups and their respective stables of actors and creative talents largely went about on their own.

With those old barriers gone, a new generation of talents has begun cross-pollinating each other’s stages, charging venerable companies such as Peta, Rep and Tanghalang Pilipino with new blood and new energies. The newly established Theater Actors Guild, if it plays its cards right, will have a big role to play in further upgrading, professionalizing and growing the local performing-arts scene.

Musical-theater artists were still the busiest this year, as most of the big productions were in the song-and-dance mold. Pedigrees and budgets could only go so far, though, as quality remained touch-and-go. 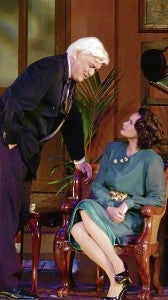 Atlantis Productions alone had the distinction of staging one of the year’s most exceptional (“Next to Normal”) followed by certainly the most dismal (“Aida”).

Rizal and Shakespeare hovered over many of the productions.

The Bard animated seven productions—two campus stagings of “Titus Andronicus,” a touring production of “Much Ado About Nothing”; Anton Juan’s take on “Macbeth”; two riffs on the man and his work—Rep’s comedy “Shakespeare in Hollywood” and PETA’s “William”—and Tanghalang Ateneo’s “Sintang Dalisay,” which transposed “Romeo and Juliet” to a Badjao-Muslim environment.

The acclaimed tandem of playwright Layeta Bucoy and director Tuxqs Rutaquio, incidentally, had a rare misfire with their strained, etiolated adaptation of “Titus Andronicus” for Dulaang UP.

A full-length operatic work (“Noli Me Tangere: The Opera”) joined the crush of Broadway-style musicals late in the year, though staged more like a chamber musical than the grand opera it was originally envisioned as. 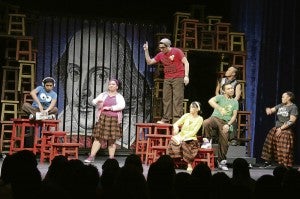 While its vocal and artistic requirements are quite different—for purposes of this yearend roundup, and following the Tony Awards’ example which considered Baz Luhrmann’s Broadway production of “La Boheme” in 2003 as part of that year’s awards—the Dulaang UP production is included here.

Of some 68 shows big and small (some we watched multiple times to catch the alternate casts), here are what we consider the best of Manila theater in 2011:

“Kafatiran” (Dingdong Novenario; JK Anicoche, director). As we wrote in July this year: “A dazzling feat of historical revisionism… In its sheer impudence, appeal to plausibility and bravura staging, ‘Kafatiran’ came closest to the Labfest’s spirit of fresh, thought-provoking, taboo-breaking theater.” And from a debuting playwright yet!

“William” (Ron Capinding; Maribel Legarda, director) What sounded like a long shot on paper—Shakespeare made accessible to younger audiences by transposing his verses and stories to the era of rap—turned out to be a winningly hip, ennobling show, with outstanding turns from a youthful cast and a joyous, unforced vibe that made the best case for contemporary pedagogical theater. 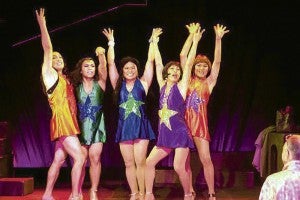 Joel Lamangan (“Fake”). Ferocious acting that, at its most searing moments, took one’s breath away. Playing a master forger with a sincere, even patriotic belief in the benefits of his truth-bending, myth-making exertions, Lamangan offered a harrowing figure of shabby grandeur and sympathetic deviousness. 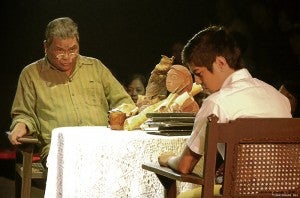 Lara Fabregas (“Hedda Gabler”). The ascetic realism of Ibsen’s most lacerating play found its ideal vehicle in Fabregas’ fearless, unadorned but rivetingly intense performance. Gracing nearly every scene of a production that largely eschewed overt sound design for the tension of unquiet silences, she held everything together admirably.

Meann Espinosa (“William”). Here’s one featured performance—the “terror” English teacher who goads her students into appreciating and learning from Shakespeare—without which the buoyancy of “William” would have missed its cue. Espinosa milked her role to comic heights, yet with an ever-sensible core that nudged at the mind and heart.

“Care Divas” (Liza Magtoto, with music and lyrics by Vince de Jesus; Maribel Legarda, director). A brand-new musical that, sans the refining gauntlet of any tryout or workshop, emerged tight, potent, full-bodied, brimming with sensational performances, canny melodies and an uncontainably Pinoy sense of humor, humanism and poignancy. Not perfect—its politics sometimes got long-winded—but, all in all, a work that deserves a long, fond foothold in memory.

Jett Pangan (“Next to Normal”). In one-half of the most powerful musical pairing of the year, Pangan roamed the psychological highs and lows of “Next to Normal” with both extraordinary vocal strength and moving emotive facility. A high-water mark in this rock star-turned-musical-theater stalwart’s resume.

Menchu Lauchengco-Yulo (“Next to Normal”). An amazing performance by any measure, galvanizing and purifying at the same time. Lauchengco-Yulo’s gravitas, intelligence and consummate maturity at this point in her (over-30-year) career in musical theater were a cinch for the arduous dramatic and musical demands of the bipolar character she brought to life onstage. From beginning to end, she was a stunner.

Michael Williams (“Peter Pan: A Musical Adventure”). The musical itself was often chatty and listless. But whenever Williams as Captain Hook staggered into view, he energized the proceedings with his unerring comic and musical chops. Sam Concepcion was a grown-up, appealingly dark Peter Pan, but this Captain Hook was the true star of the show.

Jean Judith Javier (“Noli Me Tangere: The Opera”). Unquestionably the high point of the rather meandering De Leon-Tolentino opera, Javier’s rendition of “Awit ng Gabi ni Sisa” was a mesmerizing piece of theater, a rapturous 11-o’clock number that, along with the Pangan-Lauchengco Yulo tandem in “Next to Normal,” stands as the year’s most thrilling moment on the musical stage.

Maribel Legarda (“Care Divas” and “William”). For two major works in one year that married entertainment and instruction into vital theatrical wholes. Both easily sentimentalized material, they triumphed through Legarda’s shrewd directorial care and a light, almost groovy touch, allowing for a vibrant exploration of homegrown story-telling and creative stagecraft.