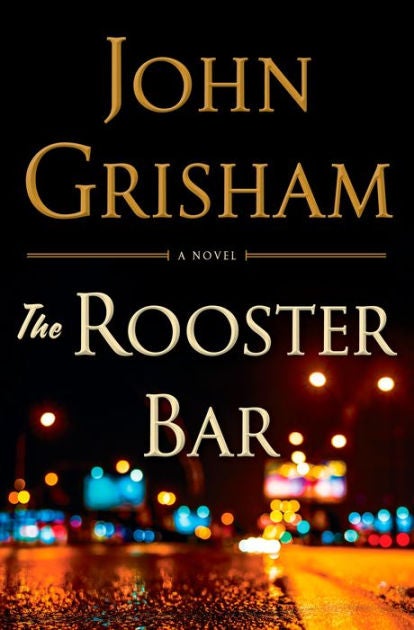 ‘The Rooster Bar’ is John Grisham’s most outlandish yet

But in his second novel in a most productive year, Grisham steps past that line. In “The Rooster Bar” (Doubleday, New York, 2017, 352 pages), he tells the tale of three law students who start practicing the law even if they haven’t finished law school or taken the bar yet. Burdened by student debt and shaken by the suicide of a friend, Mark Frazier, Todd Lucero and Zola Maal start up a law firm, taking actual cases and making it up as they go along in Washington, D.C.

Why do it? “Survival,” Todd says. “We’ll survive by hiding and pretending to be other people. We’ll hustle the streets because there’s no turning back.” They knew full well that they would be committing a felony: the unauthorized practice of the law. “The beauty in their scheme was the brazenness. No one in his right mind would stand in front of a judge and pass himself off as a lawyer.”

At first, it seems to work, as the made-up law firm of Upshaw, Parker & Lane manage to pull together a gaggle of small cases. But “The Rooster Bar” (the book is named after the somewhat shady establishment from which the fake law firm operates) pushes the fake lawyers into a pit of moving parts that either don’t slide together or slide together too conveniently.

There is the class action suit against a big bank gone bad that floats just beneath the surface before suddenly emerging full-form late in the book. “The Rooster Bar” then takes a precipitous dive into calamity because there is no way Mark, Todd and Zola could realistically keep up the façade for too long. Part of the book’s weight comes from the difficult consequences arising from their unusual career choice.

As with Grisham’s last book, “Camino Island,” this one has an odd rhythm to it. Unlike the earlier Grisham books, “Rooster Bar” doesn’t build to a suspenseful climax. Instead it kind of hangs around and then lurches towards conclusion.

A real-life lawyer who had engaged in legal activism, Grisham is known for putting the topics he cares about in his books. The problem with “The Rooster Bar” is that he addresses several different issues without much disguise: for-profit law schools, the legal quagmire of illegal immigration and the money involved in class-action lawsuits. The paragraphs that introduce the said topics are dense exposition, standing out from the otherwise efficient action in Grisham’s narration.

The best things about “Rooster Bar” are the three lead characters. Mark, Todd and Zola are compelling, well-designed characters who will draw the audience in. Down on their luck in so many ways, the three find an inventive if illegal way to get through it all, taking a risk that obviously was not going to pay off the way they thought it would. Or did it?

The happenings switch fairly quickly from Washington, D.C., (where most of the book happens) to Senegal and another foreign destination, but the transition doesn’t feel like it happens organically.

For the first time in a long time, readers can feel Grisham’s hand guiding and

jerry-rigging the developments in “Rooster Bar.” The novel’s premise is the most outlandish thing Grisham has ever really written about (he usually writes about lawyers, imperfect and greedy ones, but at least real ones). That alone is interesting enough for Grisham fans to crack open “Rooster Bar,” but the book weirdly alternates between urgency and indifference.

Still, it is fascinating to see John Grisham go forth in such an unusual direction, even if “Rooster Bar” is as flawed as its lawyers, as outlandish as their big scheme.