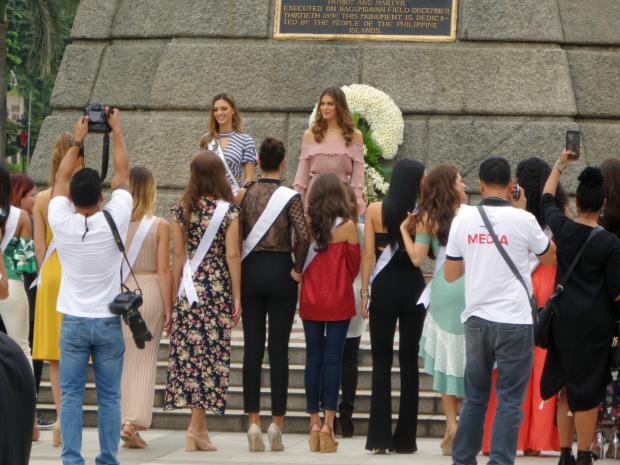 To kick off their Philippine tour, the Miss Universe beauties took part in a wreath-laying ceremony at the Rizal Monument in Manila on Wednesday, Dec. 6, 2017, led by Miss Universe 2016 Iris Mittenaere of France (left) and Miss Universe 2017 Demi-Leight Nel-Peters of South Africa (right). (Photo by RICHARD REYES / Philippine Daily Inquirer)

“You’re lucky!” exclaimed newly-crowned Miss Universe Demi-Leigh Nel-Peters, whose first overseas trip to the Philippines as the reigning queen took place even before her homecoming in South Africa.

“I haven’t even come home yet. I came straight from New York after the competition in Las Vegas,” the queen told the Inquirer in an interview after a media briefing on Wednesday afternoon at Dusit Thani in Makati.

The briefing was organized by Filipino company Frontrow, who has partnered with the Miss Universe Organization for its charity programs.

Joining Nel-Peters at the briefing were her predecessor Iris Mittenaere of France and 2015 winner Pia Wurtzbach of the Philippines.

Thirteen delegates to the recently-concluded Miss Universe pageant also came to the Philippines to accompany Nel-Peters on the first leg of her reign.

They are from Canada, Spain, the United States, Malaysia, Korea, Singapore, Russia, Italy, China, the Netherlands, India and Great Britain.

Miss Universe Philippines Rachel Peters will of course be part of the group.

Tourism Secretary Wanda Teo told the Inquirer that the ladies had been chosen even before going to the competition in Las Vegas.

“We chose these ladies, whatever the outcome of the contest may be, because they represent our emerging tourist markets,” Teo said on the sidelines of a luncheon hosted by Resorts World Manila at the Passion Restaurant.

The plan, she said, was to invite the eventual winners and the pre-selected candidates.

To kick off the Philippine tour, the ladies took part in a wreath-laying ceremony at the Rizal Monument in Manila.

They then headed to nearby Fort Santiago to start a a quick tour of Intramuros.

On Friday, the ladies will be split into three groups.

A batch will visit Batanes, another one will explore Bohol, and a third set will fly to Camiguin.

“We wanted to represent Luzon, Visayas and Mindanao, so we chose these places. They also weren’t included in the itinerary for the candidates of the 65th Miss Universe [in Manila in January],” Teo explained.

Paula Shugart, president of the Miss Universe Organization (MUO), shared how ecstatic she was that the Philippine trip pushed through.

“I want these girls to experience what Iris and her batch had here in the Philippines,” Shugart said.

Nel-Peters said she was excited to learn of her trip to the Philippines.

“I witnessed how passionate Filipinos are during the Miss Universe. They made quite some noise in [The Axis Theater, where the competition was staged], and I receive a lot of love from Filipino fans on social media,” she said.

She also asked Mittenaere about her experience in the Philippines during the previous competition.

“I told her it will be fun. They’re all going to enjoy the Philippines. The food is delicious, the people are warm and kind, and the places are beautiful,” Mittenaere told the Inquirer.

Shugart said that the MUO would want the Philippines to host the pageant once again, but there were no active negotiations as of the moment.

“They wanted us to host again. But we begged off because of the Asean 50,” she said.

“So instead of hosting the contest itself, we have this tour for the ladies, which will still help promote the Philippines to different countries around the world,” Teo continued.

The Department of Tourism will fete the ladies at the “Women of Significance” gala night at the Sofitel Philippine Plaza in Manila on Saturday.

The event will also feature the creations of designer Renee Salud with the ladies of the Miss Universe pageant as models.

“We’re using the indigenous fabrics of the different tribes of the Philippines in the clothes,” Salud told the Inquirer.

Before this? The ladies will have another fashion event on Thursday night at the Solaire Resort and Casino in Parañaque City to help raise funds for the charity projects of Frontrow.

The ladies are expected to leave on Sunday, but Peters said that a couple of ladies would be staying to explore more of the islands and to visit her beachfront coffee shop in Siargao. /atm