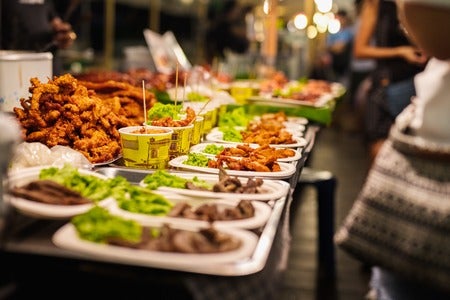 A humble street food vendor that serves crab omelettes, curries and dry congee has been placed on the same gastronomic level as a fancy French restaurant helmed by the world’s most Michelin-starred chef, Joel Robuchon, in the inaugural edition of the Michelin guide for Bangkok.

For its grand debut in the venerable red guide, Bangkok scored a respectable 17 Michelin-starred restaurants, but failed to score a three-starred establishment.

The highest ranked restaurants include French restaurant Le Normandie at the Mandarin Oriental Hotel, European restaurant Mezzaluna at the Lebua Hotel, and contemporary Indian restaurant Gaggan, famous for having launched a menu made up entirely of emojis.

Gaggan’s two-star designation is particularly noteworthy when contrasted against its meteoric rise in the contemporary gastronomic landscape, thanks mostly to the influential World’s 50 Best Restaurants awards.

For the last three years, Gaggan has held bragging rights to calling itself Asia’s best restaurant as the chart-topping eatery on Asia’s 50 Best Restaurants awards.

Similarly, Bo Songvisava of Bo.lan restaurant, who was named Asia’s best female chef in 2013, was deemed worthy of a single Michelin star in the inaugural guide.

Meanwhile, inspectors have made Michelin-grade dining in Bangkok accessible to diners of all budgets by awarding a star to both a 70-year-old eatery that serves modestly-priced street food, and fancy fine dining restaurants like L’Atelier de Joel Robuchon, helmed by the world’s most Michelin-starred chef.

At Jay Fai, the chef-owner turns out crab omelettes, crab curries and dry congee behind her homemade charcoal stoves, continuing her father’s 70-year-old legacy in the streets of Bangkok.

After landing in the Michelin guide for Singapore as the world’s cheapest Michelin-starred meal, chef Chan Hon Meng has been catapulted to international stardom and exported his chicken and noodle stall to Taiwan, Thailand and this month, Australia.

Bangkok also topped a recent Booking.com survey of 18,500 respondents, who named the Thai capital as one of their favorite destinations for street food.