The edge (and age) of adventure | Lifestyle.INQ ❮ ❯ 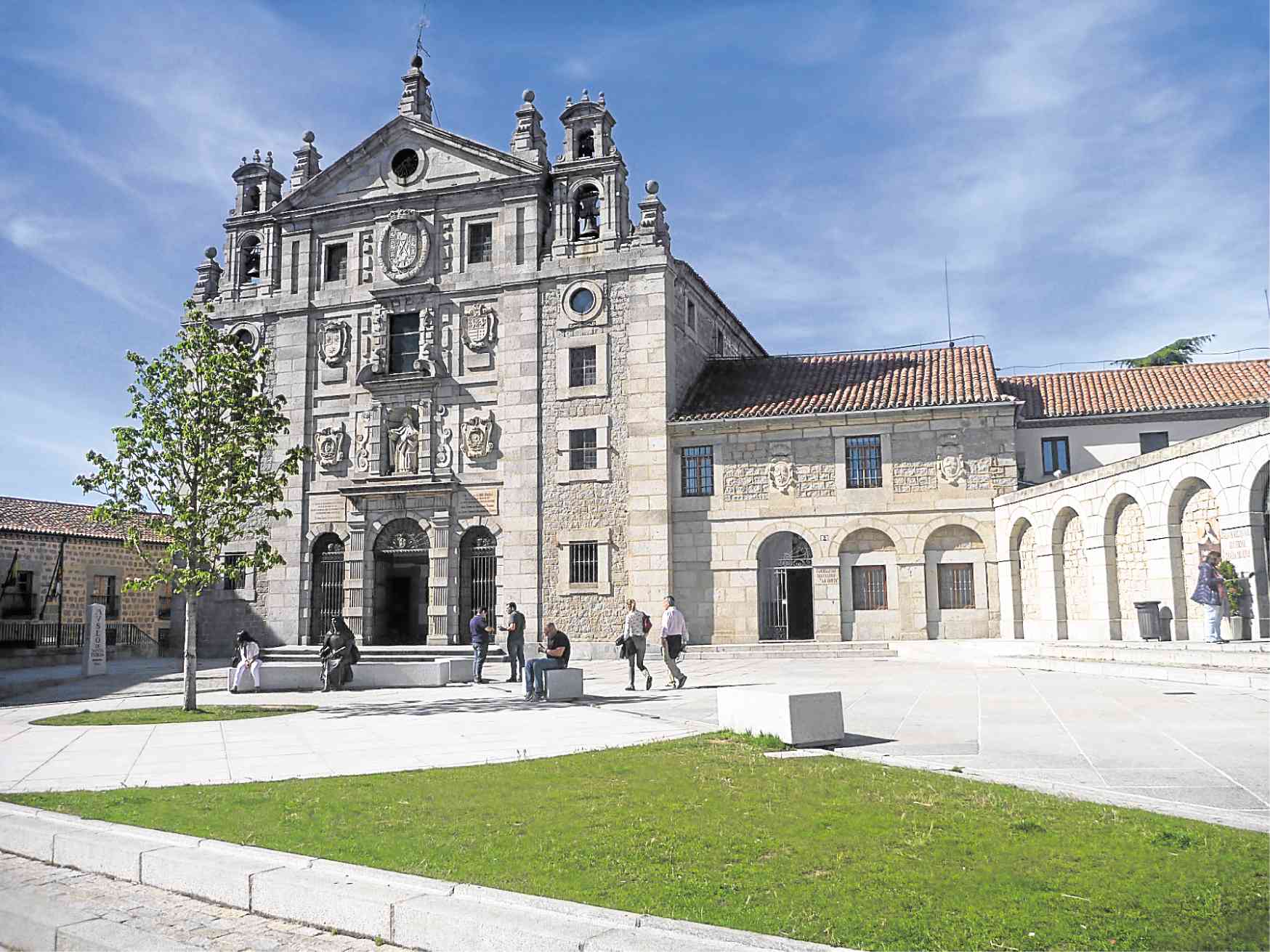 The Convent of Santa Teresa de Jesus, her birthplace and home, Avila

The edge (and age) of adventure

Can two seniors, age 66 and 72, tour several cities in Europe on their own? Would they have the strength to drag their luggage up and down the winding paths of the Old World, or even hoist them on the overhead bins of trains and planes? What if they misplace their travel documents or forget their room number?

The last one happened on our first night in Madrid. For the life of us we could not remember which door was ours in the Airbnb. The doors had no numbers and were unmarked.

Carrie Tharan, my younger traveling companion and a widow like me, had two keys she tried on some doors while I frantically tried to call our host. We had a nervous laugh about the CCTV. Already, we could see the headline: “Two Filipinas arrested for suspected burglary.”

Finally, I had an “Aha!” moment: In my mind’s eye, I remembered which door our host welcomed us to as we got out of the narrow elevator. At last, the two keys fit and we were inside.

In Prague, it was age versus age, as we wrestled with the lock of the ancient door in our apartment. There was a pull/push technique we couldn’t quite get without injuring our fingers. Was it a senior moment, our faltering muscles, lack of coordination, or all of the above? Somehow after so many tries, we managed to get in.

We were not exactly travel rookies, Carrie and I. But this trip was different. It was my first time traveling through Europe without my children, who were quite adept at navigating the metro through Google Maps. Initially, I just wanted to travel to old cities in Asia, see the Angkor Wat in Siem Reap, maybe tour Kyoto and Hanoi.

But in December, when Carrie invited me to Siem Reap, we happened to compare our bucket lists and discovered that we both had Alhambra, Spain, on it.

In March, Carrie said she was traveling to Scotland and Berlin, but wanted to make the most of her Schengen visa with a detour to Spain. Would I want to go? I jumped at the offer.

My daughter Mariel and Carrie’s daughter Diwa, who joined us in Spain, helped with bookings. As for airport directions, we turned to the kindness of strangers, especially when asking for the right terminal for our connecting flights.

As seniors, Carrie reminded me, it wouldn’t be a walk in the park to get to the gates so we should ride the buggies and wheelchairs. But I did feel silly riding the wheelchair especially when I traveled alone from Manila to Madrid and then to Seville, where I met up with my travel buddy.

It was quite a feat for me to register 9,219 steps on my Fitbit tracker on our first day in Seville, and 11,527 steps in Prague. We even climbed the 35 levels of a ramp to reach the top of the bell tower, La Giralda.

Every time we felt tired, we would sit down for a cup of coffee or gelato. I did miss the senior citizen discount in restaurants. But in Madrid, we managed to enter the Reina Sofia Museum for free. We just had to show proof (like our passports) that we were above 65.

We had our fill of fruits native to the region—cherries, the sweetest pears and peaches, nectarines, giant strawberries and, of course, fresh orange juice. But it was not only our taste buds that were fully awakened. Our eyes, too, drank in all colors of flowers—giant roses in white, yellow, peach and red, and spreading bougainvillea in a riot of colors. Trees in violet, burnt red and yellow foliage. They were all over in the gardens of the Alhambra in Granada as well as in the Casa de Pilatos (House of Pilate) in Sevilla.

In Cordoba was a contest of private patios.

A lingering scent followed Carrie and me as we strolled around Sevilla. “What is that fragrance?” we kept asking ourselves. It must be the smell of orange trees, we surmised, eyeing the trees that lined most of the streets.

We walked into a perfume shop and we were right! Our noses led us to a bottle of Aqua Ispal by Primavera en Sevilla. Sold! Carrie and I were happy to bring the smell of oranges home to remember our travels every time we dab it on.

Carrie was always on the lookout for a kababayan. After all, her doctorate thesis was on migrant women. In the train station on our way to Avila, she saw a nun who happened to be Filipino and approached her. Luckily, the nun’s convent is in Avila so she invited us to hitch a ride with her and brought us near the church of Santa Teresa—another highlight for me as it was the birthplace of our school patroness.

From Madrid, we took the plane to Prague. When we couldn’t find a taxi to the airport, a Filipino couple helped us. They carried our luggage and waited until we boarded the taxi.

In Germany, there was no lack of kind men, young and old, who helped us get our luggage up and down the train’s overhead rack.

Prague was a different experience altogether. We were going to Berlin by train and Carrie tried to ask for information. She came back with a man who grabbed our luggage and told us to follow him. He brought our luggage to Platform 6 and told us to wait for the train, but not before gesturing for a tip. Carrie gave him a dollar but he said “more,” so she gave another dollar.

Later, he came back and said our platform was changed to 5 so he grabbed our luggage again as we followed him. Carrie feared he would ask for another tip. Fortunately, he didn’t.

We had another negative episode with a taxi driver in Frankfurt. Upon arriving in our hotel, he merely pointed at our luggage in the trunk instead of pulling them out. Reluctantly, he put them out but muttered, “Not my job,” even as we gave him a tip—also reluctantly.

Berlin was different since our hosts Peter and Barbara were Carrie’s good friends, who met us and brought us to the train station. Peter drove us to see the Berlin Wall—or what’s left of it—and the Holocaust memorial. He pointed out Unter den Linden, the street leading to Brandenburg gate, which Rizal wrote about. The last time I was in Berlin, in 1975, we had to pass through Checkpoint Charlie to go to East Berlin. Now there is hardly any demarcation line.

One thing we noticed in Europe was how senior citizens played a big role in attracting tourists.

In Seville, there was a group of seniors in costume singing Spanish songs. In Prague, we were mesmerized by the French choir of seniors performing a free concert inside a church. Another street performer, Vladimir Pinta, 83, was attracting crowds as he played the saxophone and jazzed up songs we know. We became instant fans. Carrie bought his CD.

In Frankfurt, we walked to the local S-Bahn station from our hotel, following a couple who was kind enough to teach us how to buy tickets from the machine. We were going to Heidelberg where Rizal, then already a licensed physician, observed the latest in opthalmology in the oldest university in Germany.

From Frankfurt, it took us nearly three hours by bus to Heidelberg, where we took another bus to Wilhelmsfeld for a 40-minute ride.

This is the town where Rizal celebrated his 25th birthday and wrote the last chapters of “Noli Me Tangere.” I read that it took Rizal three hours to walk from Heidelberg to Wilhelmsfeld, where he stayed in the house of Pastor Karl Ullmer. Then he would quench his thirst in the drinking fountain, which has since been relocated to Rizal Park.

It was a Saturday afternoon when we got to Wilhelmsfeld and the tourist information office was closed. Fortunately there was a guy standing by the map of the town. Carrie immediately saw Jose-Rizal-Straße. “This is where we want to go,” she told him. He pointed to a street down the road. We finally found the street named after Jose Rizal and took photos.

As we ventured down the road, I saw a sign:. “Karl Ullmer Weg. Fusswegzur Odenwaldhalle Jose Rizal Park.” A few more paces and there it was: the statue of Dr. Jose Rizal.

This was the highlight of our trip in Germany and it was with a feeling of patriotic pride and accomplishment that we made the trip back to Heidelberg.

The next day we went to Old Town, a typical medieval Bavarian town in the middle of Frankfurt where we had sausages and German potato salad for brunch.

As we walked along the river, we saw people lining up for a cruise and decided to get on the boat, a welcome respite from the heat and our aching feet. It was one of the few concessions we allowed ourselves as seniors: Take the easy way out by taking the city tour in Madrid and Prague and the river cruise in Frankfurt.

By then, on our last day, we were zapped. We decided to stay in bed and watch CNN until it was time to get to the airport. We had overestimated our energy level: Carrie had been travelling for 30 days, and I, 20, carrying our luggage up and down two Airbnbs with no elevators, over trains and a bus.

Next time we would limit our trip to 10 days, travel light and trim our itinerary.

At Naia, we congratulated ourselves: We did it, without getting sick or getting into an accident. Sure we got lost, but that’s part of traveling. Already, we’re looking forward to our next adventure. —CONTRIBUTED