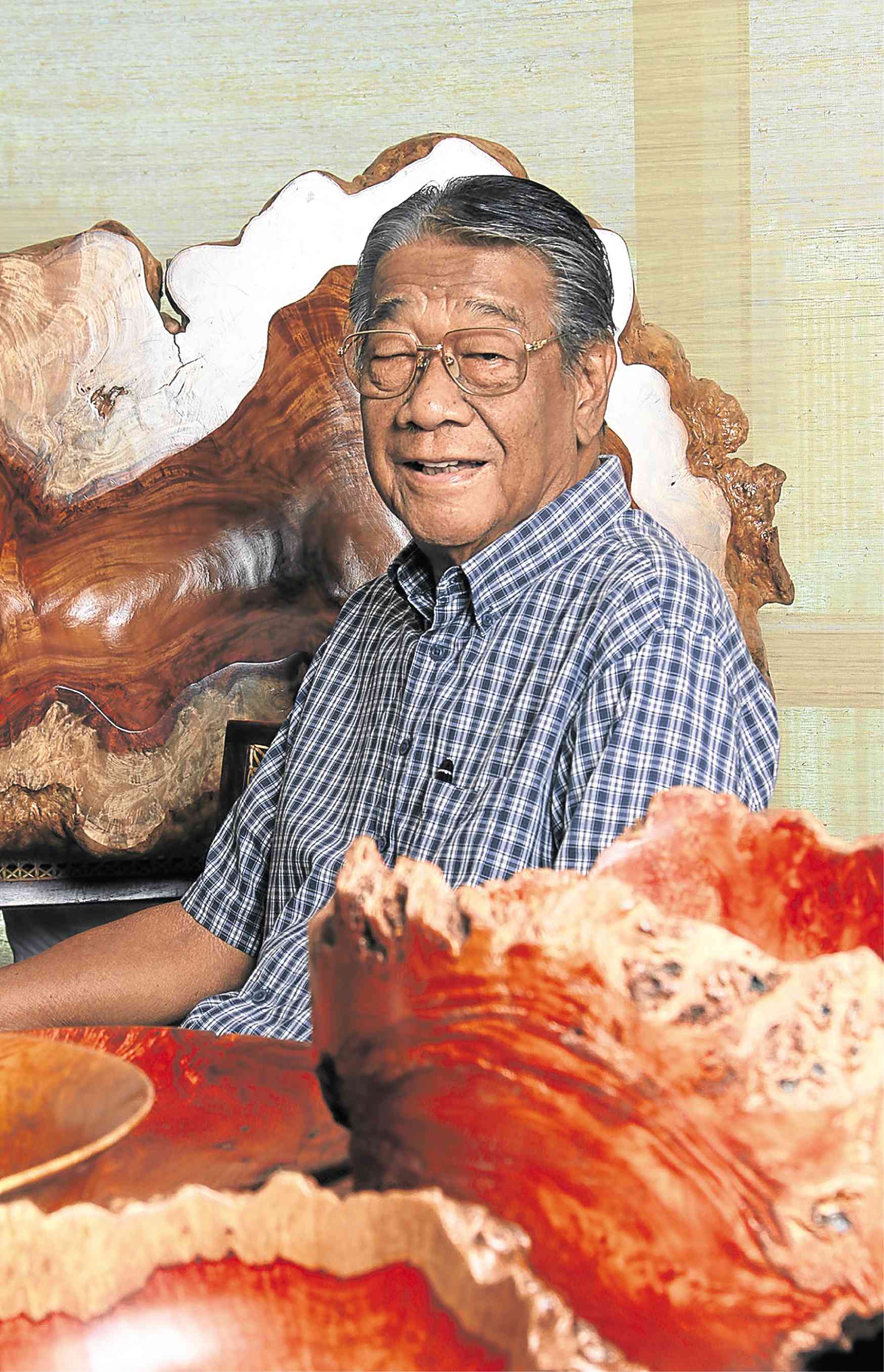 The former art dealer would become himself a creator of wooden art.

His expertise in handling tropical hardwoods was expressed in the elegance of his works. A self-taught craftsman, he leaves a legacy of truthfulness and generosity in sharing his knowledge of wood and Philippine and Chinese antiques.

“From him, I learned how to love Filipino furniture, appreciate hardwoods and how to showcase molave, kamagong and narra,” says Esguerra’s son, Edwin, proprietor of the eponymous Osmundo Furniture Gallery. “While we tend to favor foreign brands, he was the vanguard of Filipino furniture and hardwoods.”

Born on Dec. 5, 1940, Esguerra was a son of a farmer in Guimba, Nueva Ecija. After completing elementary school, the 13-year-old Omeng earned a living as an assistant janitor in a public school. Seeing his diligence, a brother-in-law told Esguerra about a job opening for a gardener in Makati.

The practical Esguerra used his earnings to buy a bike and became a marathon cyclist. Through the sport, he met contacts, who introduced him to other opportunities such as being a newspaper delivery boy and selling imported cigarettes in a stall along Arnaiz Avenue. His retail outlet attracted not only the elite clientele but also merchants of antiques. To boost his income, Esguerra joined the sellers who peddled their finds to rich customers.

Esguerra started purchasing antiques from thrift shops, cleaned them up and developed his own client base. He also supplied Antonito Tuason, owner of an antique shop in Makati, who honed Esguerra’s eye so that he could understand the refined tastes of affluent clients.

Esguerra opened the Osmundo Gallery, an antiques shop, at the Manila Garden Hotel (now Dusit Thani). People came to him to repair their antiques, particularly furniture from the Ming and Ching Dynasties. When the economy took a nosedive in 1983, he ventured into furniture restoration and construction to stay afloat.

To learn more about Chinese furniture, he flew to Hong Kong to learn from craftsmen about restoring the furniture’s original patina so that the pieces would remain valuable.

Edwin recalls that his father came back with a small Chinese table and dismantled it to learn about the construction techniques. “He discovered that the joinery techniques were similar to ours,” says the son.

To guard the market against fakes and educate them on antiques, Esguerra and his colleagues—Ramon Villegas, Tony Martino, Kit Roxas and Terry Baylosis—formed the antiques dealer association. Esguerra and Villegas were a tandem, sharing their love of history of old objects. They both coined the term “demonyo table,” which referred to 19th-century Batangas tables with ball-and-claw feet and carved demons or gargoyles.

Through the years, prominent clients remained loyal to him. “He was disciplined and could be picky about the people he worked with,” says artist, rug exporter, client and longtime friend Yolanda Johnson. “Omeng was a man of few words, but he kept them. Whatever we planned always happened.”

Edwin adds that his father learned as much as he could about wood. The older Esguerra would go to the University of the Philippines Los Baños, the country’s oldest forestry school, to ask experts to identify the wood, its age and characteristics. Over time, he memorized the scientific names of the hardwoods. “We discovered narra burl here which is similar to walnut burl,” he says.

Later in life, Esguerra studied woodturning, a technique of using a lathe or worker’s wheel to shape a bowl or object by following the wood’s grain. In 2015, Johnson published a pictorial essay, “Osmundo Esguerra,” which highlighted his woodturned bowls and home décor.

Johnson remembers how Esguerra stroked the wood while revealing his understanding of the material.

“His hunger for knowledge of wood was insatiable. Wood became his life. You could see his heart and hands guiding the tools in search of the right shape for the wood and to bring out the beauty of the grain,” she says.

He used his bare hands to wax the object. “Hinahagod ng kamay (the hands massaged it),” says Johnson. “When he caressed the bowl, he transmitted life into the wood, and the wood transmitted life to him. There was that unbreakable bond. The quality of his work remains unprecedented. I’m saddened by his demise.”

Edwin says that his father’s health had been fragile in the past five years. Aside from diabetes, he was in and out of the hospital, suffering from a mild heart attack, a mild stroke, throat infection and a weakening immune system. He had already transferred the proprietorship and management of the business to Edwin and his sister Julita.

Yet, the older Esguerra managed to see his loyal clients, and graced the book launch and exhibit at Johnson’s store, Soumak, in 2015.

Last summer, while queuing in a grocery, Esguerra fainted when his blood sugar levels dropped. Hitting his head on the floor, he ended up with a concussion and a blood clot. After staying in the hospital for a month, he came home but developed pneumonia and was again rushed to the hospital.

The past few months were spent at home, where Esguerra rested and underwent dialysis. Last Dec. 2, as he was preparing to rest, he complained of breathing difficulty, before eventually passing away.

Today, Edwin and his sister Julita run the Osmundo Furniture Gallery at Glorietta 4. Edwin, 49, vows to continue his father’s legacy. “We will respect what he started, but we will also move forward. As we develop our own style, it will always have the Osmundo touch.” —CONTRIBUTED