For Nena Tantoco, Christmas decorating is a labor of love 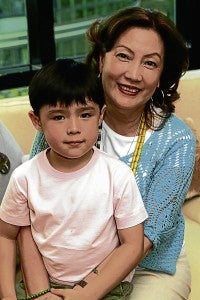 Nena Tantoco, wife of Bienvenido “Rico” Tantoco Jr., president of Sta. Elena Properties and chair of Rustan Group of Companies, has been decorating the homes of close friends and loved ones during Christmas for several decades now. This year is no different.

But whereas she used to decorate several houses almost simultaneously, Tantoco has decided to cut back in recent years by devoting her time and energy to her children’s homes.

Before the holiday rush sets in, she welcomes Inquirer Lifestyle and Cocoon Magazine to the Makati condo unit daughter Katrina Tantoco-Lobregat shares with husband Paolo and their four-year-old son Sevy.

Two days later, she ushers us into the country home of son Gippy Tantoco and wife Hindy and their three kids at Sta. Elena Properties in Canlubang, Laguna. Before the day ends, we find ourselves back in an exclusive village in Makati, where son Paolo and wife Dina and their two girls live. (Dina is currently on the family way with the couple’s third child.)

Despite Tantoco’s penchant for “classic” Christmas looks, no two arrangements are alike. Katrina’s home, for instance, is fashioned around mostly red and green trimmings with touches of white and gold, while Paolo’s place brims with jewel-toned décor such as fuchsia, turquoise, sapphire blue and lime green.

Gippy’s home has a more rustic feel, thanks to Tantoco’s generous use of real greens combined with shiny, artificial pieces in red and gold. It’s in keeping, she says, with Gippy’s personality and love for the outdoors.

“I try to incorporate fresh and dried leaves, branches, and twigs in my creations,” she says. “Otherwise, if I limit it to store-bought items, somehow the arrangement lacks heart, lacks soul.”

She also does an inventory of each family’s Christmas décor. Only then will she know if she needs to retire certain pieces or beef up existing ones from Rustan’s own extensive inventory. Since each family accumulates different pieces through the years, no two displays will ever look similar.

“Christmas always brings out the child in me,” she says. “I never saw decorating as a chore. Christmas was a big thing in my family while I was growing up. It’s a legacy I inherited from my parents, which I’m now passing on to my children and grandchildren.”

Sights and sounds of Christmas 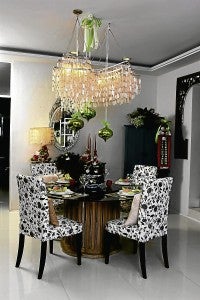 As a child, Tantoco and her siblings spent their days studying in Manila and going home to Negros Occidental during Christmas breaks. Their father, a farmer, and their homemaker-mother would always make sure that they’d be greeted by the sights and sounds of Christmas—from the music to a makeshift Christmas tree fashioned from twigs—during those precious and few homecomings.

“There weren’t any commercially available Christmas trees back then,” she says. “My mother and several farmhands would do the trees themselves. And since there was no electricity, my father would turn on the generator to power the lights. Imagine the wonder such a scene brought to a wide-eyed child. We were literally jumping for joy.”

That’s why if there’s one characteristic that’s constant in Tantoco’s Christmas displays, it’s the presence of whimsical touches perhaps only a doting grandmother could think of. Since all her six children (son Joel passed away several years ago) are all grown-up, Tantoco draws inspiration from her grandchildren.

She spruces up Katrina’s Christmas tree, for instance, with miniature mittens and stockings made of felt, one of which contains a short letter Tantoco wrote to Sevy using multicolored crayons. The table arrangement is made more colorful, thanks to several sugarcoated cookies in the shape of Christmas trees, snowmen and Santa figures.

“My messages to my grandchildren change every year,” she says. “But the gist is always about loving, giving and sharing. The letter would be read to Sevy by his parents a few days before Christmas.”

Since Paolo and Dina’s home is ruled by girls, Tantoco opts for a more girlie décor in the form of sparkly buntings, ribbons and teddy bears for the Christmas tree. 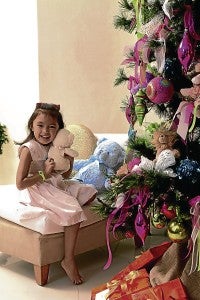 And despite the attention she lavishes on her work, no Yuletide arrangement is complete without the Nativity Scene. In Katrina’s case, Tantoco made do with a metallic image of the Child Jesus.

“The Belen was the star of the Christmas season when I was growing up,” she says. “After all, it’s Jesus’ birthday we’re celebrating during Christmas. In fact, I only learned about Santa Claus when I was no longer a child.”

Gippy’s home has a few magical touches of its own. It is this year’s venue for the family’s (Rico Tantoco’s branch) annual thanksgiving party held every first week of December.

She wanted a place of honor for each family member, so she looked for everyone’s individual close-up pictures and put them in little gold picture frames. They now hang in Gippy’s Christmas tree with the rest of the holiday trimmings.

Tantoco is also doing daughter Bea’s condo unit. Like her son Robby, Bea is still single. But unlike Bea, Robby still lives with them. Eldest son Donnie and wife Crickette would probably have to do their own decorating this year, as Tantoco is pressed for time to do another house. “It’s never about me, but always about the family I’m doing it for,” she says. “Their personalities and the stage they’re now in should reflect in the décor.”

As a consultant for Rustan’s Department Store, the Liberal Arts graduate from Assumption College is also responsible for coming up with holiday décor ideas for the department store chain. She also supervises people in the visual department to execute her concepts.

“I’ve been working with these people for years,” she says. “Like my household staff, they’re like my family.”

The home she shares with husband Rico would have to wait for next Christmas. The place, which, according to her, now looks like an office, is still being repainted.

Tantoco’s love for decorating began as a hobby, which her late mother-in-law Gliceria Tantoco nurtured by asking her to get actively involved in the family business. In the mid-’70s, Rustan’s started decorating venues for big parties through its Rustan’s Flower Shop.

“From being a homemaker, I soon found myself conceptualizing for other people and working with teams,” Tantoco says.

She did that almost on a full-time basis for 35 years, and loved every minute of it. Tantoco still keeps a file of previous works and updates herself by reading up and clipping images she finds interesting. She also gets cues from the latest fashion trends in terms of colors and materials.

Asked how she psyches herself up every time she embarks on a decorating job, especially for her children’s homes, Tantoco lets us in on a little secret.

“I make it a point to first pray to the number one creative director, and that’s God. If He managed to create the world in seven days, I ask His help to assist me to create something nice for each house in one or two days. I really ask Him for inspiration and guidance. He’s the ultimate source.”