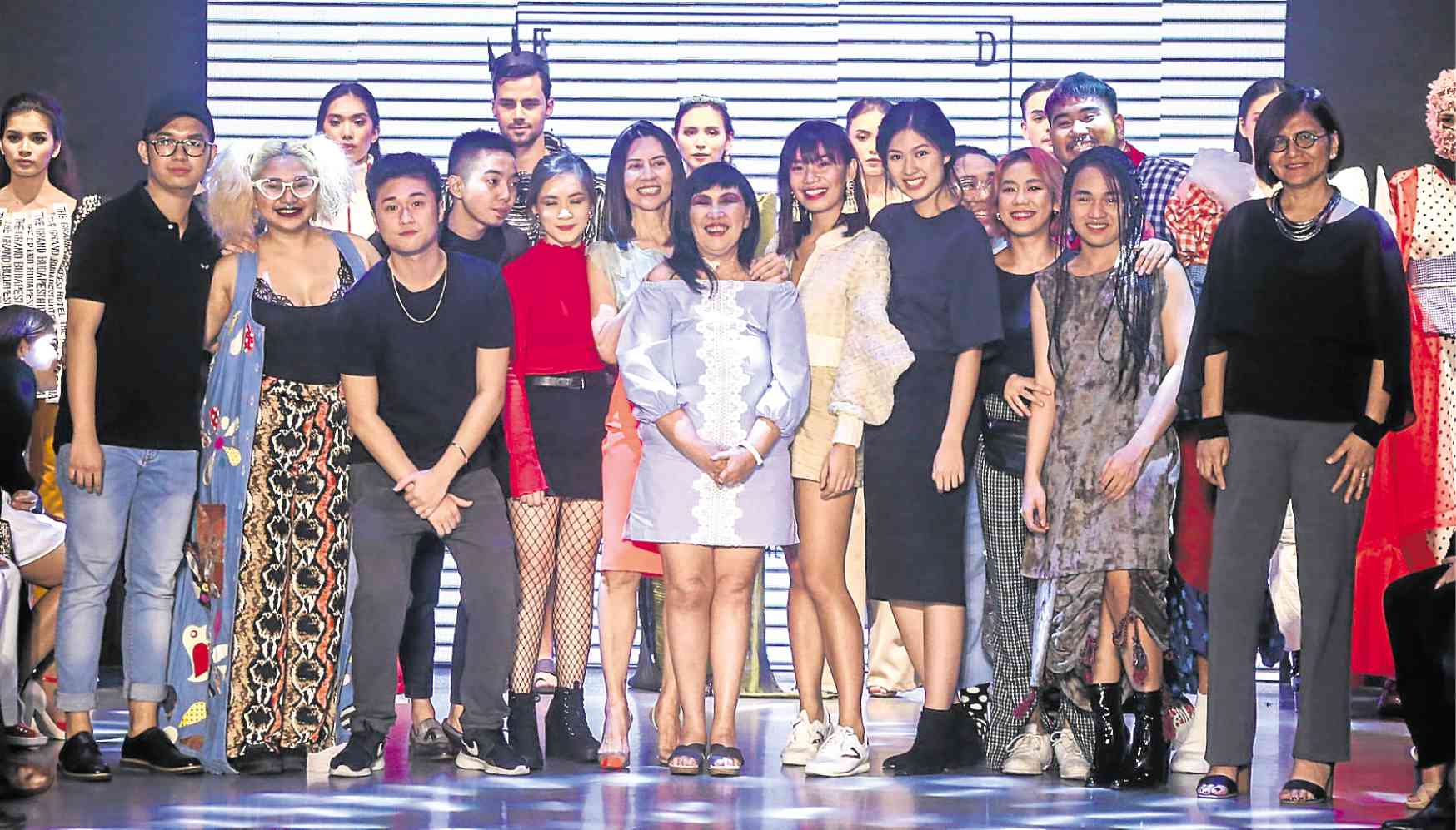 Forget the fashion rules; they don’t apply anymore.  Don’t try to explain that which can’t be explained.
Just take it all in.

You’ll be well advised to keep all of the above in mind when you see the collections of today’s fashion design students—so that you learn.

That was precisely what we did watching “Sinulid,” the collection of fashion design students of De La Salle-College of Saint Benilde (CSB) under Lulu Tan-Gan last Nov. 27 at SM Aura Premier.

Benilde, sponsored by SM Aura, with Inquirer Lifestyle, presented the individual collections of the students, amounting to more than 50 pieces, at Samsung Hall.

It was an informative and stimulating experience for fashion watchers and reviewers because it showed today’s design vibe and philosophy—just where the country’s budding fashion design talents are coming from.

It brought to mind my conversation with Philippine fashion stalwart Auggie Cordero many years ago. I was asking him for his dos and don’ts of fashion, and he said, “There’s no such thing anymore. What works is entirely up to the individual.”

And Cordero has been proved so right.

Come to think of it, that was how fashion’s great looks were “made” down the centuries. Coco Chanel, for instance, discarded the restrictive garments of women of her time and created the fluid straight silhouettes, and turned to the attires of her guy friends to inspire her women’s clothes.

The great designers were iconoclasts—they defied rules and traditions, or went against the tide.

Iconoclasm is in the genes of today’s generation. They enjoy the freedom of creation—fired up by technology—to a level never enjoyed by previous generations.

And they do it with encouragement of mentors like fashion veteran Lulu Tan-Gan, who let them be, and nurture their potential. She guided the “Sinulid” students.

Not only did she know where they were coming from, she encouraged them to tap into their inner selves, their inner muse, even their angst and “depression” to create.

When I looked at the collections backstage before the show, I realized that, indeed, here is the multimedia generation that doesn’t think in a straight, linear mode. Their knowledge isn’t acquired in a structured or formal setting like the classroom, or books.

While the designers of previous generations pored over tons of fashion books to “feel” the influences of and to dissect the craft of fashion greats such as Dior or Charles James, today’s design talent merely has to go to YouTube or Google to watch the collection. It is visual, spontaneous, and perhaps superficial.

More than books, today’s design talent taps experience to create a collection. Personal experience is what matters to them, not the work of scholars of bygone era. They visualize experience.

The Benilde students drew inspiration from whatever struck them—from a psychopath like Hannibal Lecter to an urban legend about a teleporter soldier.

They’re stirred into creation by movies (such as “Silence of the Lambs,” “The Grand Budapest Hotel”), animé, video games, national symbols such as the Filipino warrior vis-a-vis Japanese warrior, abstract theorems such as the existence of parallel universe. Or even by a gay grandfather whose true gender preference became known to the family only after his death.
“My rich, very feminine designs are my way of honoring my lolo,” said the design student. (Now, I’ve heard everything.)

How do these ultra-personal pegs translate into fashion? Like I said, forget the design paradigm.

Even gender enjoyed fluidity; lines were blurred. Two design students created Valera-inspired ternos—for guys. The students were asked to create clothes inspired by National Artist Ramon Valera, which they paraded in the finale.

The students defied traditional silhouettes and construction. They manipulated fabrics and any materials they could get their hands on—including plastics, or leather on suede.

They layered fabrics and clothing, ripped them, shredded them to fringes, quilted them—whatever technique pleased them.

They didn’t respect color blocking. Some didn’t use colors—just black, or transparent plastic or tulle.

In truth, there was no point trying to define these elements of fashion design in the Benilde collections. The viewer must see them as self-expressions of their creators.

We’re dealing with a most expressive generation—selfies!

A few numbers wore face masks and straight-jacket-style suits, like harbingers of a holocaust or depression.

The collections weren’t happy or sweet. That’s not this age’s psyche. The designs were honest, not put-ons or pretentious.

Honestly, I enjoyed just seeing how these students expressed themselves one ensemble after another.

They were not copycats. That’s a good beginning.

The “Sinulid” designers whose names we’ll be watching out for in the years ahead: Tajah Fuentes, Renzel Galleta, Rosbert Villar, Miuccia Olivares, Patricia Gavan, Andrea Suarez, Vairo Velasco, Imma Colarina, Kelvin Morales, Camillie Linao, Macy Blasino, and Abraham Guardian and Mamuro Oki who made up the brand Ha.Mu (this early, they think brands).