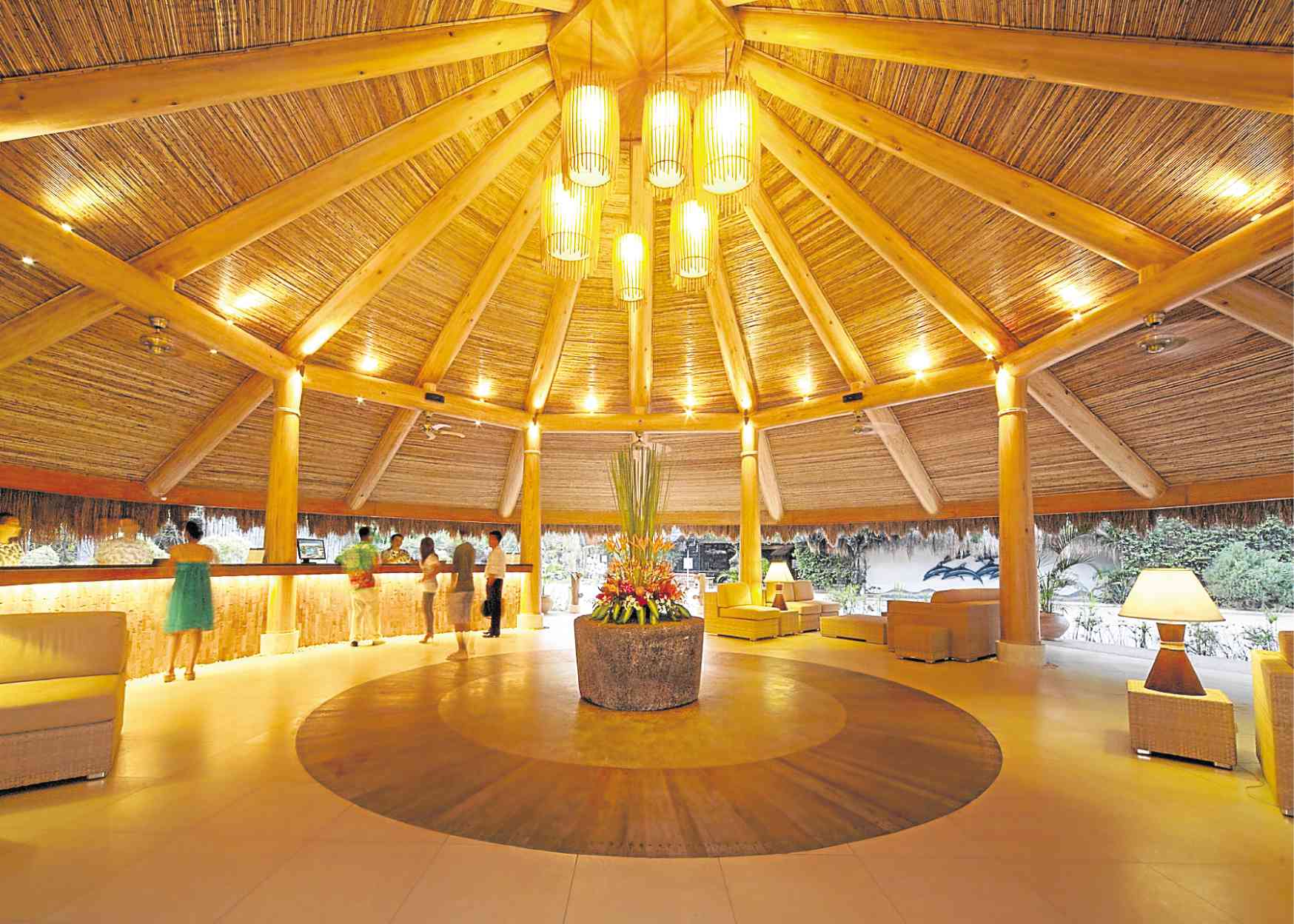 How the primitive island of Mactan became a world-class destination

In the purple haze of twilight, silhouettes of a robust lad and a limber lass bearing lanterns that emanate blue and green light can be seen on a cliff overlooking the sea. They are the chieftain Lapu-Lapu and his wife Bulakna.

Soon other young women bearing lanterns join them. They are the wives of the fishermen waiting for their men coming home from the sea at dusk. This ritual dance is performed every evening in a resort on the island of Mactan in Cebu.

Since that fatal encounter of East and West on April 27, 1521 in Mactan—which then had a bad rep as a pirates’ lair at the entrance to the trading port of the town of Sugbo (said to be the reason Lapu-Lapu’s relationship with Cebu’s Rajah Humabon deteriorated and made the latter ally with the Spaniards)—the island has risen to become one of the country’s economic success stories.

After a tax-free industrial zone opened in 1979, business ventures in Mactan multiplied. It is now the country’s most densely populated island (half a million people in an area of 65 sq km); and has the country’s second-best airport (after Iloilo’s).

The coral island used to have stony beaches, not conducive for swimming, until enterprising Cebuanos covered them with fine white sand and developed the coastline, generating a resort boom. It now has a world-class tourism industry.

One of its oldest beach resorts is Bluewater Maribago, which opened in 1989. It claims its pioneering investments in the area “acted as a catalyst of the current tourism boom in Mactan.” The resort sprawls on seven hectares and has “a wider beachfront than most,” says marketing and communications manager Erik Monsanto.

Aquamania is for water sports activities, jet-skiing, parasailing, island-hopping. Marine Wildlife is where visitors can participate in the shark feeding at 4 p.m.

The Cove is a live-seafood resto with an oyster bar, accessible through a long ramp. Across is a man-made private island for sunbathers, away from it all.

“Challenging months used to be October and March—but not anymore,” Monsanto says. “Peak season is from November to February, and summer, of course.”

He points out that the big difference of the resort is not just its beach activities and entertainment, but also its promotion of culture. Its partner, Blue Horizons Travel & Tours, brings guests on a heritage tour of Metro Cebu.

Its spa promotes the native massage culture of hilot. It hires authentic manghihilot (traditional therapists) who are single mothers, to provide job opportunities for this neglected sector.

It is also big on its advocacy of eco-consciousness through volunteerism, recycling program, and education of the community. Recycled materials are used on repurposed surfaces, as showcased in the main lobby’s décor.

The resort’s nurseries provide vegetables, herbs and spices, even honey, as fresh ingredients for its farm-to-table and spa offerings. The gardens are fertilized by in-house vermiculture and trash composting.

BlueARTh Day is an annual affair that advances eco-consciousness through arts and culture: exhibit of artworks using recycled materials; cuisine of homegrown ingredients; family outdoor activities. The art gallery has exhibited works of the likes of BenCab and Romulo Olazo.

Project Blue has employees who are certified divers go on regular underwater clean-up and coastal maintenance.

General manager Rhyz Buac stresses that “balance has to be achieved in harnessing tourism benefits and nurturing the beauty of natural surroundings.”

During the Asean Tourism Forum last year, as a “special recognition for its sustainable and green hotel practices,” Bluewater Maribago was awarded as one of only 10 Asean Green Hotels in the country (and one of only two in Cebu).

One of the newest resorts in Mactan is the Balinese-inspired Crimson Resort & Spa. It celebrated its seventh anniversary in October but already it is No. 2 of the 10 most-booked luxury hotels in the country (after New World Makati).

Every room has a small porch with a low table adorned with frangipani blossoms in a coconut shell. Every morning the shell is attached with a small scroll listing the day’s activities (such as island-hopping), their venues, even a map.

Luxury is defined by the resort’s 40 villas, each with a private plunge pool and a separate recreational space; four restaurants, including a sports bar and a beach club; fitness gym, private beach, and a 1-km jogging trail.

And to stress that pampering is its business, it offers an award-winning, 2,000-sq m spa and wellness center called Aum (from the Hindu om, believed to be “the primordial sound of creation, and as a mantra evoking a meditative state of being”).

Here the scent of dayap calamondin and orange blossoms leads you to a pavilion in a garden, a cluster of Thai cabanas by the pool—or you may stay indoor in a sunken tub luxuriating in a bath of milk (blend of gatas and gata).

Its poolside refreshment bar serves sandwiches and homemade ice cream. But the pricing is no child’s play. The foie gras burger costs P1,000. (We assume it’s for the parents watching over the kids? The little ones can have the candy bar.)

Crimson Mactan has also created some buzz about its F&B. Saffron Café arrays a hearty buffet of standard international cuisine, though more interesting are the traditional Cebuano fare. The lechòn is okay, as always, but to-rave-for is the sautéed dayok (Visayan bagoong), which can be slathered on a melba toast like caviar.

Enye (from the letter Ñ, suggestive of the Spanish influence on our culture) has a wine cellar and a charcuterie room. It serves soulful Spanish food.

The menu is designed by Chele Gonzalez, the flavor profile a blend of classic and contemporary Spanish cuisine based on the celebrated chef’s favorite tapas, comfort food and wild concoctions. Something we can’t have enough of is the churros con chocolate, as authentic as you can get.

Azure has a luxuriant garden (you can get lost in the bushes) and a theater kitchen (you can see the drama of the cooks as they prepare your meal). Its modern Asian cuisine ranges from rock scallop to Iberico pork jowl. Don’t miss the Catch of the Day.

The venue has received a World Luxury Scenic Restaurant award. It is open all around, even on top with its retractable canopy, so you see blue sky, blue sea, thus the name.

A lovely feature is the Rock Bar perching on a promontory—quite an experience under the stars, above the waters, while imbibing your libation of choice in the magical blue hour.

It is here where one can see the ritual dance performed every evening to pay homage to this fishing village of olden times. Only this time, they sway-balance on the edge of an infinity pool instead of a cliff, and they carry rechargeable LED lamps in lieu of torches and lanterns.

A visitor would notice most foreign guests in these Mactan resorts are Asian, seldom Caucasian. Bluewater’s Monsanto estimates 10 percent of its guests are domestic tourists while 90 percent are Koreans and Japanese.

About 50 percent of over 35 businesses ventures in the island’s export processing zone are Japanese-owned.

According to the ancient Cebuano epic “Aginid,” the original name of this island was Opong. As the islanders turned to piracy, however, it was referred to as Mangatang (“to wait in ambush”), which evolved into Matan, then Mactan.

Today the natives are into a different kind of waiting—for visitors and investors.

The name Opong was later applied to a town that is now Lapu-Lapu City.