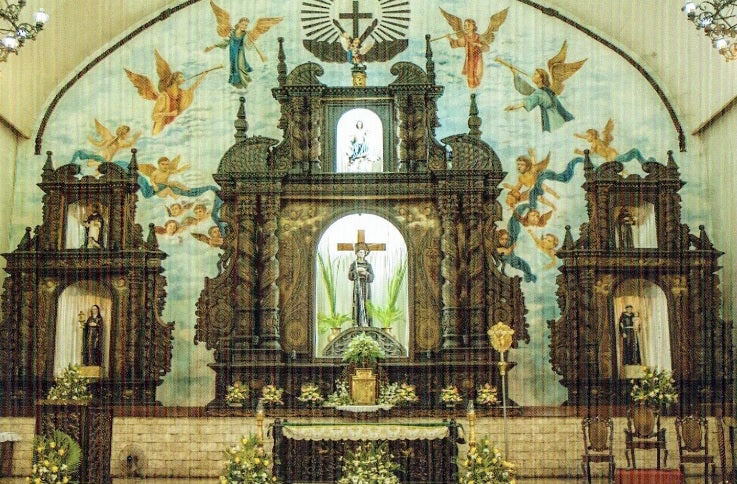 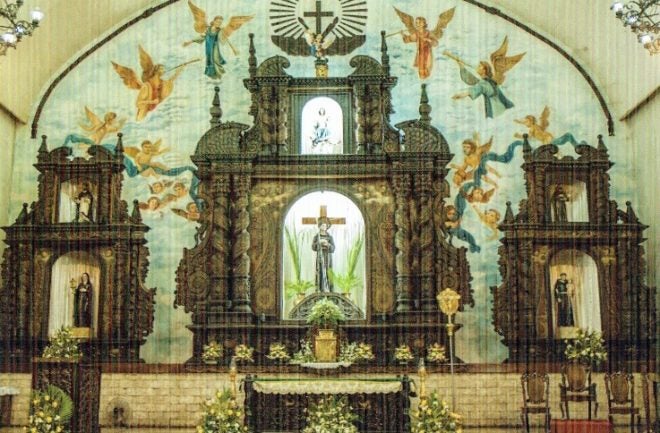 The 17th-century main and side retablo or altarpieces of Santuario de San Pedro Bautista in San Francisco del Monte, Quezon City, has fallen victim to the gilding craze sweeping over the Spanish colonial churches of the Philippines in the past years, heritage advocates say.

Dedicated to the Franciscan martyr who established San Francisco del Monte as a hermitage in the late 16th century, the stone church—now part of a larger church—and its Baroque main and side retablo date back to the 17th century.

The project to repaint and gild the retablo was spearheaded by parish priest Edwin Dioniso, OFM.

Due to the structure’s significance, it was included in the book “Facets of Faith: Discovering the Church Heritage of Quezon City,” by Billy Malacura, which notes the altarpieces were installed during the reconstruction of the church and convent in 1699.

Then Philippine Historical Research and Markers committee, now National Historical Commission of the Philippines (NHCP), installed a marker on the church in 1936.

Malacura told the Inquirer the retablo were among the few Spanish colonial-period altarpieces extant in Metro Manila.

Church art historian Fr. Rene Javellana, SJ, expressed his dismay over the renovation, saying he was “very alarmed at what professor Regalado Trota Jose calls priests with the Midas touch.”

He lamented that many retablo had been gilded in the past years, citing Argao Church in Cebu as having “suffered the worst assault I have seen.”

Argao’s retablo has been re- cently restored by NHCP.

“Education of Filipinos about our heritage is sorely lacking or does not reach the decision makers,” Javellana said.

“I gather that earlier retablo as well as church interiors were initially influenced by Mexican Baroque with its taste for polychrome [and that] only in the 19th century did single-color retablo with gilt become common.” He added that older retablo had gilt but limited only to accents and thin lines.

“Gilding used in churches is awful,” said Javellana. “It is not 24-karat gold but synthetic composition gold used for crafts, which is basically colored aluminum.”

The retablo repainting “is not the finest and not faithful to authenticity,” the Franciscan tertiary said.

Fr. Dionisio told the Inquirer the repainting had been approved by the Franciscan provincial council.

He explained it was part of several projects in the church to mark the church’s 85th anniversary as a parish this month.

He said he had “verbally” notified the National Museum (NM) and National Commission for Culture and the Arts (NCCA) about the project and was given the go-signal because the church “has no declaration.” When asked about why he did not ask NHCP since the church had a historical marker, he said it was because he had already obtained the approval of NM and NCCA.

But NCCA Cultural Heritage section head Charles Salazar said he couldn’t “find any record of receipt of communication on the church.”

Racquel Flores of NM’s Cultural Properties and Regulation Division said NM, too, had no record the church had submitted a plan or consulted the agency about the project.

NHCP chair Rene Escalante told the Inquirer he would look into the matter.

Fr. Dionisio said those who complained about his project did not know the history of the altarpieces.

He said the “original” colors of the retablo were white and gold leaf, based on a 1932 photo. It was also the first of four

layers of colors when the altarpieces were stripped of their patina.

He said the repainting was needed since the paint was peeling off. He explained that the altarpieces had undergone a number of “enhancements” after the war.

The background with painted angels done sometime in 2001 was replaced with silver travertine (limestone). The painted details of the retablo, which were done after the war, were copied and transformed into wood carvings with the latter covering the paintings, he said.

The added types of wood conformed to the original wood types of the retablo—yakal, molave and mulawin, he said.

The priest added the wood support of the altarpieces were replaced by steel to avoid damage in case of a strong earthquake.

He said what was done in the retablo were “restoration, enhancement and retrofitting.”