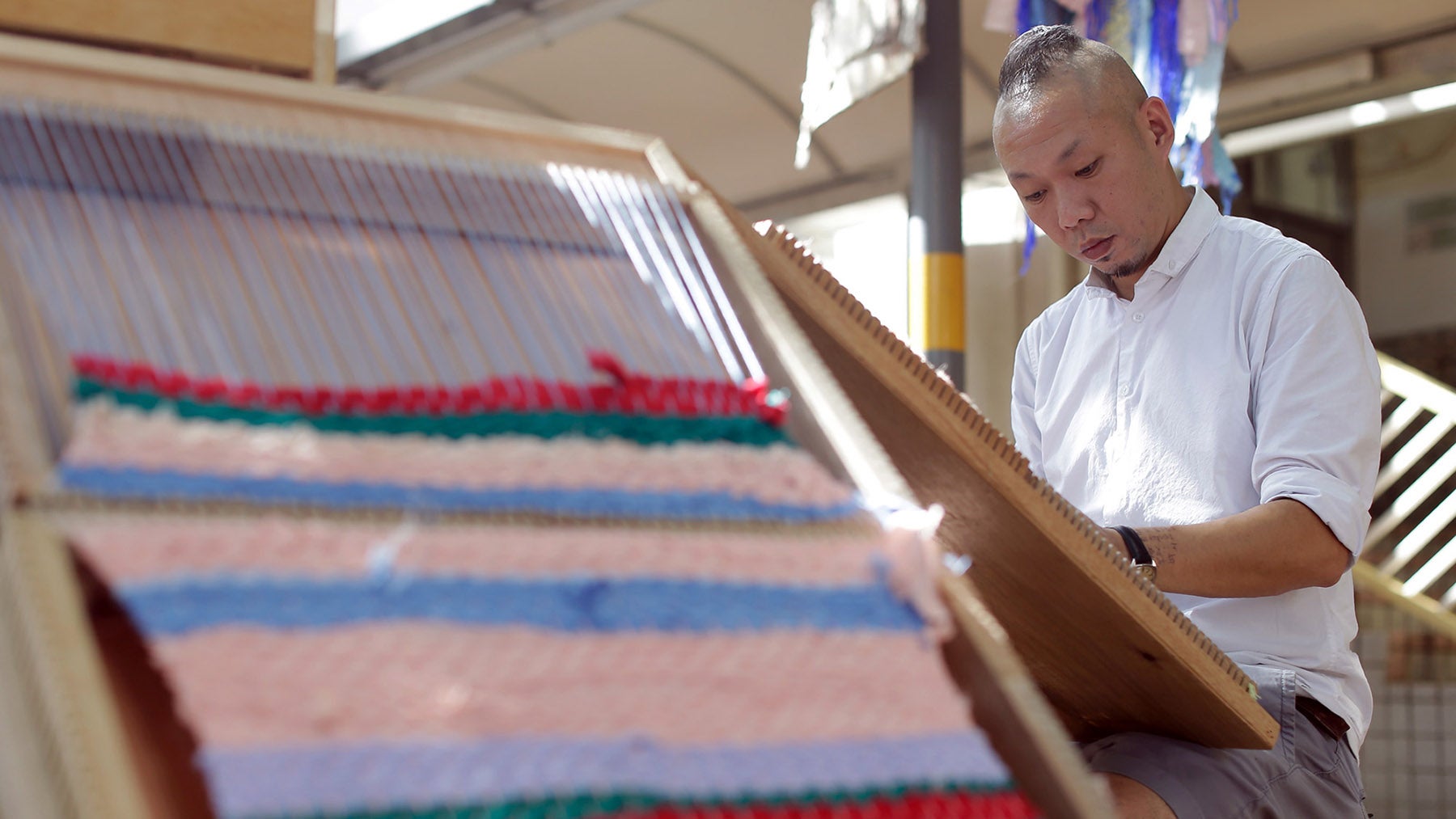 Weaving a way into people’s hearts

HONG KONG — He’s probably the most-photographed butcher in Heung Che Street Market in Tsuen Wan although he refuses to show his face in the photos. He also doesn’t take interviews and insists that photographers frame him neck downward. The young man in question is a bit tired of modeling an item of his workaday gear — an apron cut out of “self-cleaning fabric” developed by the Hong Kong Research Institute of Textiles and Apparels (HKRITA) — although he had a role in its making.

Heung Che Street wet market is a long way away from HKRITA’s lab where the technology for creating yarns that respond fast and effectively to chemical treatment was developed. Centre for Heritage, Arts and Textile (CHAT) acted as the bridge in between. CHAT, earlier known as MILL6, aims to link up Hong Kong’s textile heritage with people’s lives in the present. They run several community outreach programs in Fuk Loi Estate, across the street from the market, and were keen to see the butchers, fishmongers, seafood and tofu-sellers — those most likely to get their work clothes stained during the chopping and dicing — benefit as a result of their intervention.

CHAT’s designer Hung Ming-kin put together a range of custom-made aprons, factoring in specific demands from the butchers.

“Earlier they wore aprons cut out of cheap, faux cotton,” says Hung. “The fabric got damaged from washing with bleach and strong chemicals.” Hung used genuine cotton. A piece of detachable self-cleaning fabric formed a second layer on the apron’s front. “Just pull it out, wash it and stick it back on using Velcro fasteners,” says Hung, pleased with his handiwork. He made a denim apron for one of the butchers “as he liked the look of it”. A lining of light-weight canvas was added to the piece as protection against the toxicity of strong chemical dyes. ‘Weaving Wednesday’ and maker culture

Fuk Loi Estate turns especially colorful on Wednesday afternoons. Here’s where Hung leads CHAT’s weekly interactive program “Weaving Wednesday”. There is a sense of anticipation in the air until the weaving team arrives, pushing the “co-working trolley”, a contraption that can support four weavers at a time. Samples produced at the previous workshop, woven using strips of discarded fabric, are strung up on poles, like beacons, inviting passers-by to join the activity. Hung usually works the backstrap loom, a very basic weaving tool resembling a hammock. By 4:30 pm, all four looms around the co-working trolley are occupied by children, back from school, enjoying the be-calming effect of filling up the empty spaces left between the warp threads.

It took a while before the residents of Fuk Loi Estate warmed up to the charms of re-connecting with their weaving heritage. Members of Made In Sample (MIS) — who designed the weaving experience as well as its main tools — spent weeks trying to get the local community involved. The response was lukewarm at first. And then one day, an elderly lady came over to have a closer look, telling the workshop leaders that they had got the technique all wrong.

It was natural for the neighborhood to feel a sense of entitlement toward anything to do with fabric as many among them had worked in the now-defunct textile mills of Tsuen Wan. “We reworked our weaving pattern. The former mill worker who had doubted our abilities was now convinced that we meant business,” says Terry Law, co-founder of MIS. At the end of the day, of course, the exercise wasn’t about re-creating time-tested weaving patterns with accuracy, but rather to draw public attention toward a once-common but now near-extinct Hong Kong tradition of engagement with yarn and fabrics in almost every home. “The idea is to create an organic atmosphere, form a platform where the neighborhood can come together and, most importantly, register the presence of textile in our daily lives,” says Him Lo, curator of learning and community at CHAT.

One year down the line, participating in Weaving Wednesday activities has become a bit of a weekly ritual for the retirees of Fuk Loi Estate who often bring their grandchildren along to “play” at the looms.

The idea of getting a motley group of people — with little or no experience of weaving — to work the looms, randomly, leaving their imprint on a piece alongside that of several, variously-enabled, others resonates with that of maker culture. Originally associated with the world of computer technology and the internet — where the intrusion of hackers led to products and systems often quite different from those originally intended — today the existence of maker culture in our social lives is being seen as a way of building a more inclusive world. CHAT’s Weaving Wednesday series too is designed as a kind of community DIY where everyone, from the classically-trained to the advanced technology geek to the hobbyist to the rank amateur, is welcome to bring their thing to the table.

“The co-working trolley is indeed a tool for conducting maker culture experiments,” says Law. “I think in the past 20 years in Hong Kong, we have made an almost total transition from technique to education-oriented skills. We do not know how to produce any more. So we are trying to encourage people to become makers in their spare time rather than having to buy very basic items of everyday use from the shopping mall.”

“That’s why the trolley panels are both big and small. Choose your size, depending on your time and patience,” he adds. Clothing for a greener world

CHAT’s predecessor MILL6 grew out of a nostalgia and reverence for the now-defunct Nan Fung Mills in Tsuen Wan and the heyday of Hong Kong’s textile industry from the 1970s to the 1990s in which it had a leading role. Today any effort toward memorializing and learning from a textile heritage is incomplete without a focus on sustainability, especially since textile manufacturing units remain among the worst polluters in the industrial sector. To that end, CHAT holds workshops, teaching people to make small items like slippers and coasters, using basic weaving techniques, exposing them to the methods and merits of up-cycling used and discarded garments.

Yan Chan, the director of business development with HKRITA, counts promoting the idea of sustainable clothing as a major goal of the research center. “We don’t necessarily have to make clothes using virgin material like we do now,” says Yan. The bulk of old, unsold clothes thrown away by garment retailers every season, she says, could be used to generate new fibers. “And we don’t use those fibers to create low-cost, isolated items, rather to embellish already existing garments, like a brand logo on an athlete’s jersey.”One of the most inspiring things about recycling, she says, is that “it has shifted the focus away from manufacturing to the human factor… on how recycling might be useful to human society”.

Leftover fabrics from HKRITA’s store came in handy during the development stage of butcher’s aprons.

Then, for HKRITA, the idea of sustainability extends beyond yarns and fabrics to embrace microeconomics and societal development. A group of ladies from Fuk Loi Estate, some of whom once pushed the treadle in local garment manufacturing units, also produce towels and bibs for infants from the anti-bacterial chitosan fabric, developed by HKRITA by extracting chitin from the soft shell of lobsters and crabs. The products are sold from a local store. Many among the customers would not be able to afford branded products from shopping malls. “Whenever they have free time, the ladies use chitosan fabric to make towels, and they do it as an act of charity,” says Yan. “It’s a great way of reaching a locally developed product to people living in the same community.”

When heritage meets the future

Such coming together of traditional know-how and avant-garde technology could be a sign of what social scientists predict is the coming Fourth Industrial Revolution, or — as certain academic and public sector entities hoping for an industrial revival in Hong Kong are calling it — Industry 4.0.

The signs of a new, improved confluence of lessons from the past and technologies befitting the future are already evident in the textile industry. For instance, the designer duo Vincent Lim and Elaine Lu recently gave the old favorite hand-woven Tai Ping rug — the first of which had rolled out of a workshop in Tuen Mun in 1956 — a fresh spin to optimize its uses in Hong Kong’s spare living spaces. They created “Reform”, a modular rug whose three modules could be arranged in several different configurations to suit the need of the hour. Although the design was developed using advanced digital technology, each piece is custom-made and 100 percent hand-woven.Although a nod to heritage for romantic reasons is a valid one, it’s even better when inherited technology is still useful. At Tai Ping Carpet’s new state-of-the-art workshop in Xiamen, Fujian province, the manually operated tufting pistol invented in 1960 is still in use, though perhaps not in the exact same way.

“In the beginning, the electric tufting gun was a hand-operated needle, run on electricity, operated by an electric motor. Still, someone had to hold it, running it across the carpet from left to right,” says Michael Kadoorie, whose family owns the enterprise. “So the movement was from a manual needle to a mechanized one to an automated gun. Today, of course, you could choose the designs displayed on a digital screen.”

From the hand-held tufting needle to the 3-D-printed brassiere developed by HKRITA to support breast cancer-afflicted women, textile design in Hong Kong has come a long way. The textile activists of today are looking to include the city’s people in this journey.