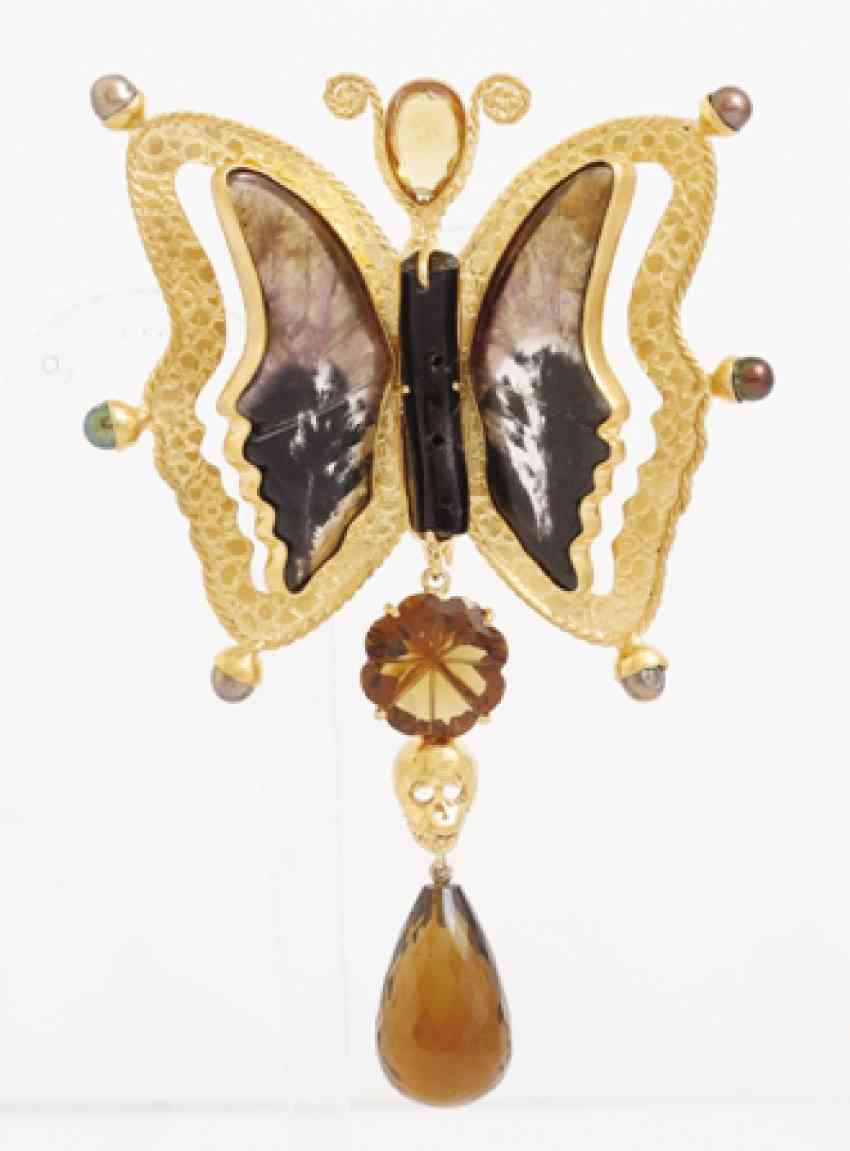 The ‘distillation’ of Wynn Wynn Ong

Retrospectives are necessarily nostalgic moments in which highlights of shared memories or objects recall distinct periods. Retrospection can denote the end of an era, where the past is buried in the past, never again to be repeated in any form.

Wynn Wynn Ong’s “Distillation,” though, by her own pronouncement, as the last jewelry collection she will produce, does not close the book on whatever body of work she has created in her chosen art of jewelry design.

Perhaps for those who have been collectors of her meticulously crafted pieces, it is, indeed, an end to their jewelry boxes of Wynn Wynn Ongs. But for the designer herself, it marks an undefined beginning, which she expresses by choosing to incorporate new knowledge of her craft into pieces whose origins stem from her early templates.

As she chooses to define it, this latest body of work is a refinement, perhaps a kind of maturity or finesse, or a studied complexity which she introduces into this collection.

In her hand-painted rings and earrings, which, in the past collection, used a mother-of-pearl base, this time around, Wynn Wynn utilizes the reverse glass painting technique, verre eglomisé.

However, in her attempt to move a step further, she uses a historical technique which harkens back to the Byzantine period. It requires the painter to paint the miniature image on glass, executing the most frontal feature of the figure first, followed by layers of detailing in glazes. The gilded background is laid on last. The glass it is painted on is convex, giving the illusion that the central oval is a precious stone.

The intricacy of the technique, which is not discernible to the naked eye, is appreciated only in its polished form, and in its minuscule size.

A large rectangular ring, for example, recalls a previous collection featuring figures in colonial dress—reminiscent of Damian Domingo’s figures. This time, the figures are rendered in verre eglomisé, thus giving the figures a kind of icon-like dimension particular in Transylvanian examples.

Present always in her past collections were flora and fauna in unique bejeweled environs, whether a frog poised on bright green jade or highly embellished moths and butterflies, mini garlands of golden flowers with gems for centers or golden leaves accentuating precious stones.

Now she capitalizes on the natural geology of stone formation, sometimes carving down to the deep gray matrix of a pink stone, to create a figure that emerges amid monochromatic gray shades, defining the pink creature’s anatomy.

Again, it is similar to an age-old technique utilized by master sculptors of the Renaissance period, where the veins of Carrara marble were studied to coincide with human anatomy. Even in eclectic insect figures, like the giant carved ant carrying a miniature golden bulol on its back with an outsized gem stone for accent, craftsmanship does not give way to the sparseness of modernity. The meticulously carved-out holes give it its third dimension.

Wynn Wynn’s fascination with Orientalism—perhaps because she is Orientalism personified, an Asian raised in the Western world, a happy mix— was exemplified in her collection of figures-under-glass, a vitrina.

Here she mounts little golden chinoiserie figures on a carved tortoiseshell comb transformed into a pendant, held by golden pagodas.

Aside from the attention to craftsmanship that has drawn Wynn Wynn’s clientele to her pieces, there is also the narrative that goes with every unique piece. Many refer to the pieces as “statement” jewelry, and what each piece states is personified by the wearer, be it “the reoccurring connection to nature” in the “organic shapes inspired by nature,” as Bea Zobel describes, or the “perfect state” Junie Peña notes in her Wynn Wynn bahay kubo ring: “The tiny seed pearls on the corners of the nipa roof… even a teeny tiny dog on the steps.”

Peña adds: “When you look at it, you can’t think of a single thing you could possibly change to make it better. Each piece and each part of each piece is a work of art, meticulously thought out, and yet all of them connect beautifully as a whole.”

“Wearable art” has gained ground in the past few years. More often than not, these pieces are designed by artists, not jewelers, untrained in the craft, each piece almost experimental in form, function and material.

In the Philippines, Ed Castrillo, Arturo Luz and, lately, Leeroy New, come to mind. Abroad, there was Picasso, Dali and Roy Lichtenstein.

The artists gave themselves free rein, not conforming to the parameters of traditional jewelry making, even seeing how far they could go as far as the wearability of their pieces was concerned.

How then does one classify Wynn Wynn Ong? An artist doing jewelry? Or a jeweler doing art pieces? One or the other, or maybe neither. She has always been on a track all her own.

Wynn Wynn comes from a family whose women live and breathe jewelry, and whose Burmese patrimony includes some of the most beautiful precious stones, or as Pilar Miranda describes her, someone with “gems in her blood.”

Born in Burma and raised in Manila and Vienna, Wynn Wynn grew up breathing gems while visiting souks in Istanbul, feeling gold in Beirut and Karachi, and seeing her great-grandmother’s fishpond rife with “rough semiprecious pebbles of garnets, sapphires, spinels, rubies, tourmaline, peridots, amethysts and sapphires.”

There was unquestionably a natural path taken when Wynn Wynn took on the art and craft of jewelry making. As Peña says, Wynn Wynn’s “cultural influences are so visible and even tangible in everything she does. I wouldn’t call it Filipiniana or ethnic or anything really, except pure Wynn Wynn.”

Untrained in jewelry making, with a degree in business management and education, Wynn Wynn taught at the International School for a few years.

Then, in 2001, she made her first collection, learning and refining her craft by observing her small band of artisans interpret her designs. She calls herself a lifelong learner, perfecting and expanding her craft and narrative as she goes along.

Like a true artist, she does not give herself parameters for what the material can do for her, and leaves herself open to what she wants to do with the material. And as a true craftsman, once she finds the true nature of her material, she refines its use to suit her purpose, thus creating “a statement piece that always tells a story,” as Zobel observes.

Her stories do not come to an end with this distilled collection. Instead, it only opens up the beginning of something else. As she has immersed herself in her artistry and craft, Wynn Wynn sees another path unwinding as she has chosen to devote more time to the ones she loves, her family, while inhaling the fine air of calmness and peace.

No, it is not an ending, but a respite, for nothing can stop “the swirling vortex of Wynn Wynn’s imagination,” as Miranda states, adding that perhaps we shall see “her stories come to life in the rendering, each one graceful and glorious” like her jewels, but this time in another form.

And quietly moving on, “Distillation” did not come with fanfare, but only by select invitation geared to support a noble cause: the foundation for breast cancer survivors, ICanServe, women who now thrive on a second lease in life. There are things, after all, that are not meant to end. —CONTRIBUTED