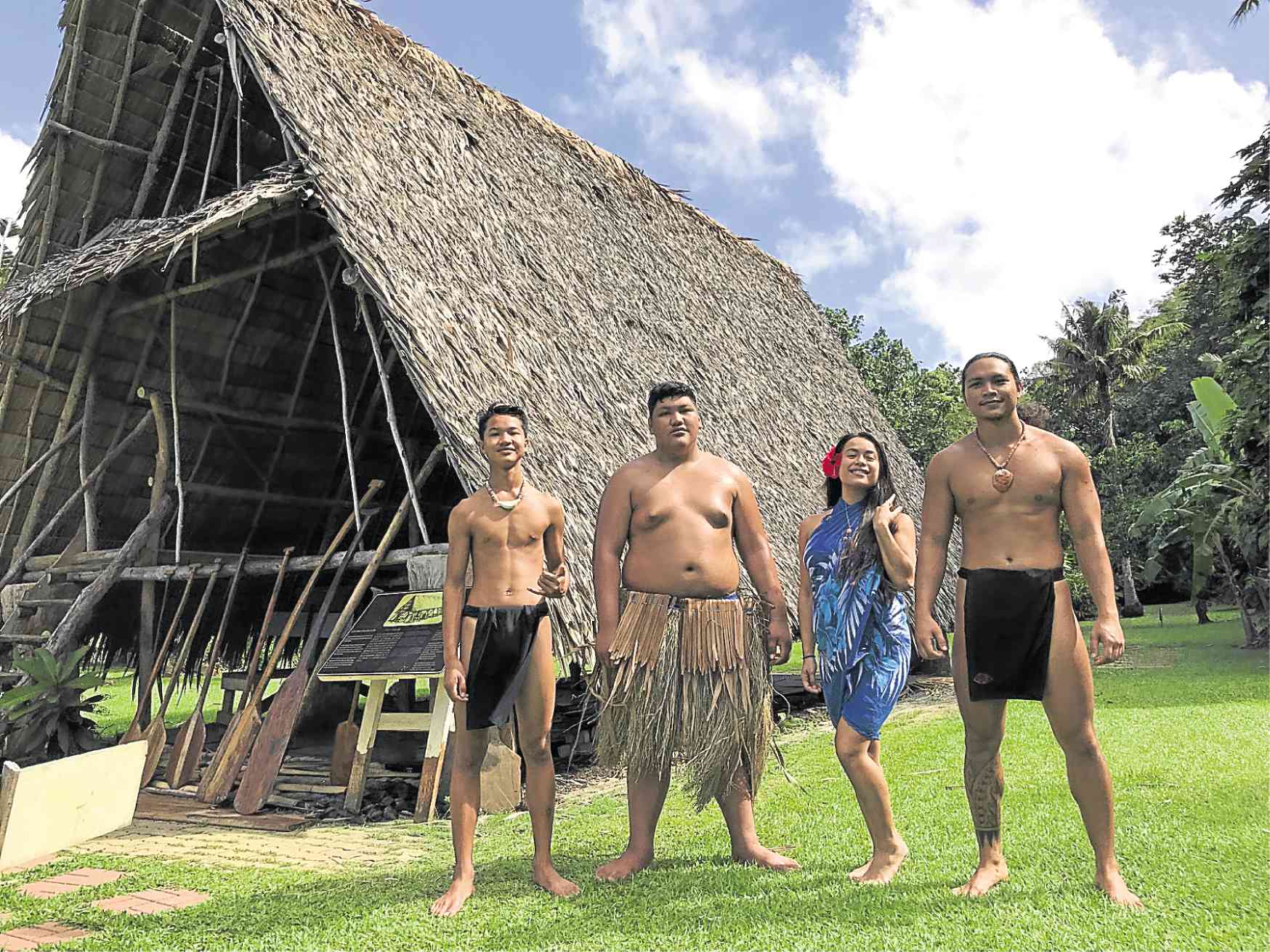 Chamorros in traditional outfits —PHOTOS BY ANNE A. JAMBORA

It takes a mere two-hour drive to go around the entire island of Guam. This charming little island in Micronesia in the western Pacific Ocean covers an area of 544 square kilometers—that’s 153 sq km smaller than Singapore.

But, as any Guamanian or Chamorro would say, it’s never about the size. For this diminutive US territory, unfazed by the nuclear threats of North Korea’s dictator only a few months back, has remained sunny as ever, attracting tourists not just for its sea, surf and sand, but for an immersion of sorts with the Chamorro culture—its crew of proud, indigenous people—and shopping, lots and lots of shopping. Guam, after all, is a tax-free destination.

If anything, said Regina Nedlic, Guam Visitors Bureau (GVB) marketing manager for the Philippines and Russia markets, Kim Jong Un’s threats only fueled the world’s curiosity. Its Google Analytics data rose sharply and its tourism is better than ever, rising to more than 1.5 million this year alone.

“Guam and its residents have been very resilient to these kinds of threats. We’ve seen ourselves through World War II, and security is our top concern,” Nedlic said.

Guam prides itself on its 4,000-year-old history and its 400 years of Spanish, Japanese and US influence, she said. The Philippines and Guam, in fact, have nearly identical histories, from colonization to culture to food to religion. Ninety percent of the population is Catholic, a religion brought into the island when Ferdinand Magellan landed on its shores on March 6, 1521, just 10 days prior to the Portuguese explorer’s discovery of the Philippines.

The island, composed of two distinct geographic regions, has volcanic origins of clay, mountainous terrain in the south, and uplifted limestone plateau in the north.

The north is among its busiest areas, where most shops, entertainment and hotels are located, while the south offers a more scenic ride, with periods of extensive erosion still visible on its mountains, similar to those in Honolulu, Hawaii.

Close to 40 percent of its estimated 170,000 residents are Filipinos, so that it takes little to zero effort at all to blend in. Guamanians have an American accent, though some of them may reply in Tagalog once they learn of your country of origin. English and Chamorro are the island’s official languages.

The Chamorro culture is the oldest civilization in Micronesia. This we learned when we visited the Valley of the Latte, one of Guam’s most popular ecofriendly destinations, on a lovely river cruise as we explored the island’s rich culture dating back 4,000 years ago.

The latte, now symbols of the Chamorro identity, are stone pillars used as building support by ancient Chamorro people. Constructed from 1100 to 1700 AD, some of them surround an area of the botanical gardens of the valley.

Across the latte is a replica of an old Chamorro village, with a traditional schoolhouse and canoe, all guarded by Ulitao, a passionate group of Guam islanders who work on reviving, preserving and growing the Chamorro’s ancient seafaring traditions. This nonprofit group aims to sail to Hawaii in a few years using a traditional canoe and old-fashioned nautical techniques.

Another trip down history was our brief stop at the Inarajan Village, one of Guam’s attractions now listed in the National Register of Historic Places. There we found the Inarajan Pools, natural oceanside pools where the locals like to spend their weekends, mostly families with young children who want to steer clear from the ocean.

Guam is a surfing island, and its abundance of shallow coral reefs, coupled with tide changes and rough current, does not make it safe for newbie surfers and for children to go swimming.

In Guam, neighborhoods that are at least an hour away from major shopping areas are considered rural. Which means most towns and villages in the south, including the Inarajan Village.

But the south boasts breathtaking, panoramic views and is the region where Spanish influence is most visible. Here likewise is the home of the last of four Spanish fortifications, built in the village of Umatac—the Fort Nuestra Señora de la Soledåd, or Fort Soledad.

Located on top of a steep hill called Chalan Aniti, or Path of the Ancestors, Fort Soledad offers a bird’s eye view of the village below, the rugged coastline, the bay and the majestic southern mountain range.

One of the most visited parks this side of Guam, Fort Soledad was supposedly constructed during the Spanish galleon trade to strengthen the defenses of the island’s most prominent Spanish-era bay.

A few minutes’ ride away is Umatac, believed by some historians as the location where Magellan landed. (Other scholars insist that the drawings from Magellan’s diary suggested that he may have landed in Tumon in northern Guam, but there is no monument over there, so here we are in the south.)

Magellan supposedly remembered Guam as the “island of thieves,” when Chamorros canoed their way to the ships and began taking away anything they could. But the Chamorros quickly learned how to barter, and Magellan was able to obtain enough rations to set him sailing off to the Philippines where he met his death in Mactan, Cebu, on April 27, 1521.

Guam’s most visited attraction, however, is located in the north, at the end of Tumon Bay. Rising almost 400 feet from the reef below is Puntan Dos Amantes or Two Lovers Point. This iconic landmark has a legendary story of love going against all odds, of you-and-me-against-the-world, of poor-boy-meets-rich-girl, where both ran away from the girl’s father and his soldiers toward the edge of the cliff.

Cornered and with nowhere else to go, the lovers supposedly tied their long hairs together before jumping off the cliff toward the raging waters below.

Two Lovers Point has the mandatory Heart Lock Wall, where visitors who pledge their love leave behind colorful love locks; and a Lookout Point overlooking the Philippine Sea and the reef that edges Tumon Bay.

For night entertainment, we saw two spectacular shows: the highly entertaining “Zubrick” at Sandcastle Theatre with award-winning illusionists Chris and Ryan Zubrick, an old-school, Vegas-style magic show with showgirls and flying acrobats, voted Best Tourist Attraction by the GVB; and “Taotao Tasi,” the captivating, often humorous performances representing the cultures of Tahiti, Samoa, Hawaii, and Guam by 50 dancers and 30 fire dancers, Guam’s only dinner show on the beach.

Cebu Pacific flies between Guam and Manila thrice weekly—Tuesdays, Thursdays and Saturdays—using the Airbus A320 aircraft with 180 seating capacity. Visit www.cebupacificair.com for more info and promos.