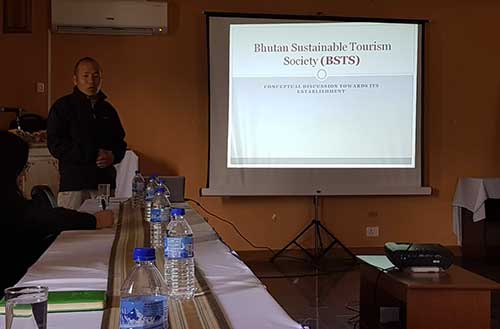 Bhutan: A society for sustainable tourism

THIMPHU — Come June, Bhutan will have a think tank to raise an independent voice in matters related to tourism.
Calling it the Bhutan Sustainable Tourism Society (BSTS), the platform is conceptualized by an eco-tourism specialist, Karma Tshering, who has a PhD in tourism and more than 10 years of working in eco-tourism, with members from myriad entities.

The society would start as a web-based, where all local reports and studies would be uploaded. It will be launched on June 2 next year.

“The feedback was that such forum was necessary to promote discourse and stimulate ideas and commentaries on certain initiatives and decisions,” Karma Tshering said. “It would act like a think tank sharing views on the issues related to tourism,” he said. “We’ll raise our views but leave it up to the government to decide.”

He said that at present, tourism agencies are not having enough feedback and research and they are under pressure to make a decision and provide views.

The society would have two-tier membership: a management group comprising of select edprofessionals and another group of voluntary members.

The meetings would be theme-based and conducted whenever necessary. The forum could discuss and share expertise on eco-lodges, and other aspects of tourism.

For instance, the decision of Zhemgang district council deciding people should wear gho during office hours, the society would provide its professional views on how the decision could affect tourism.

“Our tourism foundations have been laid well but increasingly the threat is our people are looking for short gains and the foundation has been shaken quite a bit,” he said. “Until we have these debates and discussions I’m afraid that we’ll go looking for short-term benefits and lose the sustainability.”

He said that he is becoming more apprehensive. “While many tourists return satisfied with their visit, there are more complaints, which is worrying.”

According to him, it is not the government alone that has the knowledge base today. “It has spread to so many people. The wisdom really emerges from the people who are in the field and which is key in tourism.”

He said at present only agencies speak or debate the issues of tourism while there are many not necessarily associated with these institutions but have experience and the knowledge to participate in such debates.

He said that the world might not look up to us. “The most challenging thing for tourism today is marketing but Bhutan without any efforts enjoys a high-level publicity because of the strong conservation and tourism policies.”

He said that the common platform would also serve as a point of interaction between various stakeholders and in knowledge about each other’s plans and priorities, which will contribute to making tourism sustainable.