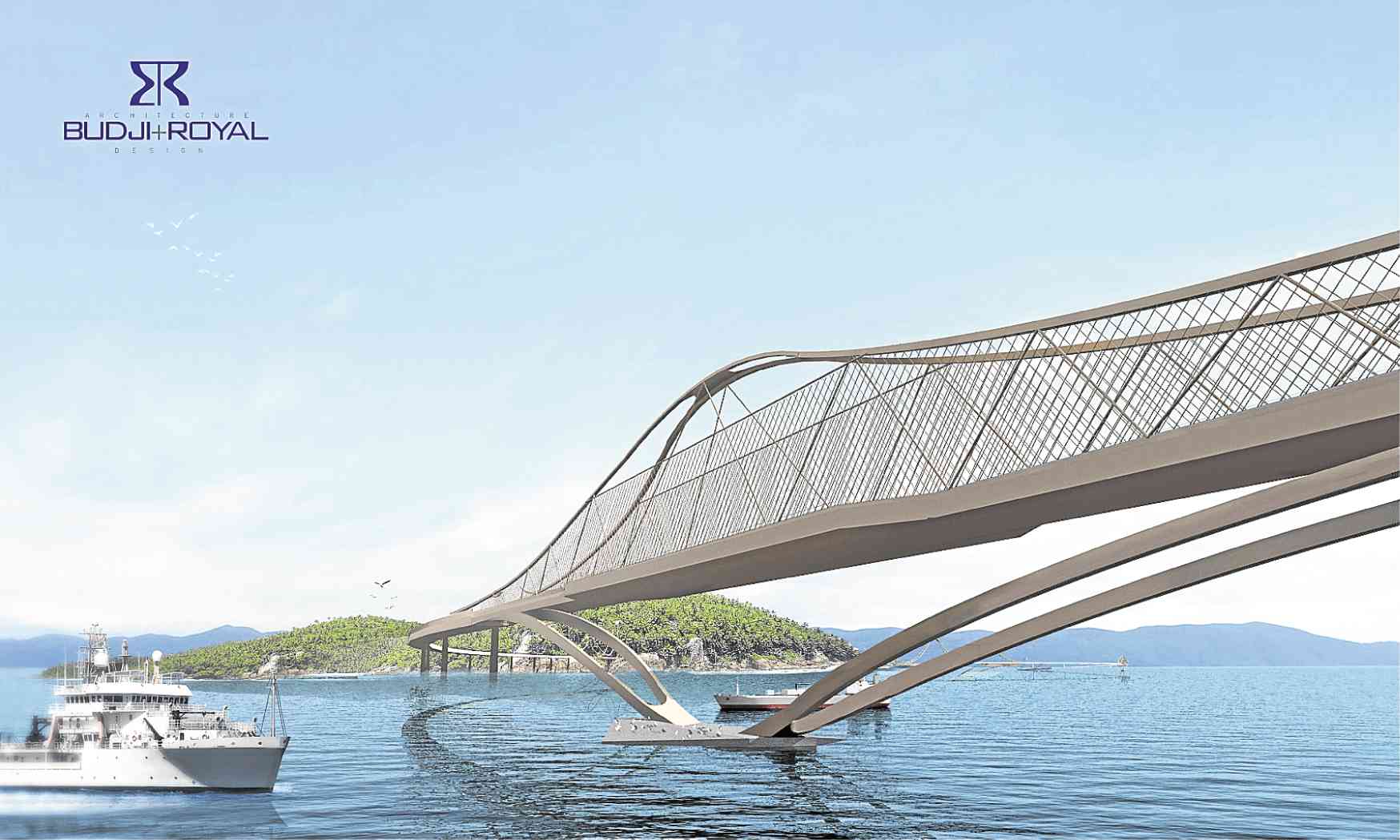 The Luzviminda bridge is envisioned to connect the archipelago. Budji+Royal aremaking the pitch tomake this vision a reality.

Design duo tapped to build ‘city of the future’

Design duo Budji Layug and architect Royal Pineda are expanding their portfolio to include nation-building.

“From the beginning, we wanted to present our roles as architect and designers without being part of politics. We can influence the country by design,” Pineda said.

“We were tapped by the government to make sure that the soul of the Philippines will be present,” Layug said.

Budji + Royal built its reputation by creating contemporary, meaningful spaces, incorporating vernacular design and local materials, and integrating the natural and cultural elements of the place.

The new CRK terminal, which is beside the existing airport in Mabalacat, Pampanga, held its groundbreaking rites last month.

Layug said he and Pineda would be meeting with officials to discuss the design of the new hub. The terminal will have a floor area of 140,000 sq m (the size of Hong Kong International Airport’s Terminal 2).

Touted as the new international hub, it is going for a two-year construction period.

Its centerpiece is the Philippine Sports City. The first phase, consisting of 200 hectares, is targeted for completion in August 2019 in time for the Southeast Asian (SEA) Games.

The Philippine Sports City will be composed of the main stadium, aquatic center and athlete’s village.

After the SEA Games, the facilities could be converted into events venues.

The community will be supported by commercial and retail buildings on the west side. Layug said a river corridor will become an urban amenity and help sustain quality environment.

The designs of the complex and the stadium pay homage to the parol or Philippine Christmas lantern. (Pampanga is famous for its lantern makers.)

The 20,000-capacity stadium was inspired by Mount Pinatubo. The walls will be made of lahar, volcanic debris from Pinatubo. The ringed roofline will look like a crater, defined by a series of curving canopies. Gold-colored structural steel frames, shaped like the “V” of a parol frame, become decorative details.

The 2,000-capacity Aquatic Center will host the swimming event. It will have a huge open shed with a prismatic roof, inspired by the capiz parol. Like the stadium’s parol reference, it is meant to glow at night.

Pineda said that the building will be easily seen from the Subic-Clark-Tarlac Expressway.

The new city is also being eyed to become a new government center.

The Department of Transportation and Railway has already relocated to Pampanga.

The BCDA said other government agencies that will relocate to the city are the Department of Justice, Department of Environment and Natural Resources, Department of Science and Technology, Office of Civil Defense, and Climate Change Commission.

Pineda disclosed a modern structure will serve as “iCloud” or backup of Malacañang and government in case Metro Manila is damaged by an earthquake.

The firm said the bridges will connect the Philippine archipelago and promote inter-island tourism and economic development.

“The Luzviminda bridge will be a symbol of unity as it will connect the islands,” Layug said. “We will no longer be limited to thinking that we are Luzon, Visayas and Mindanao. Our minds will open up.”

Layug said government officials have expressed interest in the design.

Pineda cited that “permeability” is a vital design function in all of the firm’s projects. In architecture, this term means metropolitan structures that allow ease of movement and air circulation.

“The New Clark City will be more permeable by giving more open ground floor plates in all the buildings,” he said. “The land will go back to the people. The buildings will be lifted so that people can walk under them. It’s not like the old way where the city had narrow pedestrian lanes.”

“The SEA Games structures will follow the international standards, upgraded by tropical details that will make the spaces breath,” Pineda added. –CONTRIBUTED