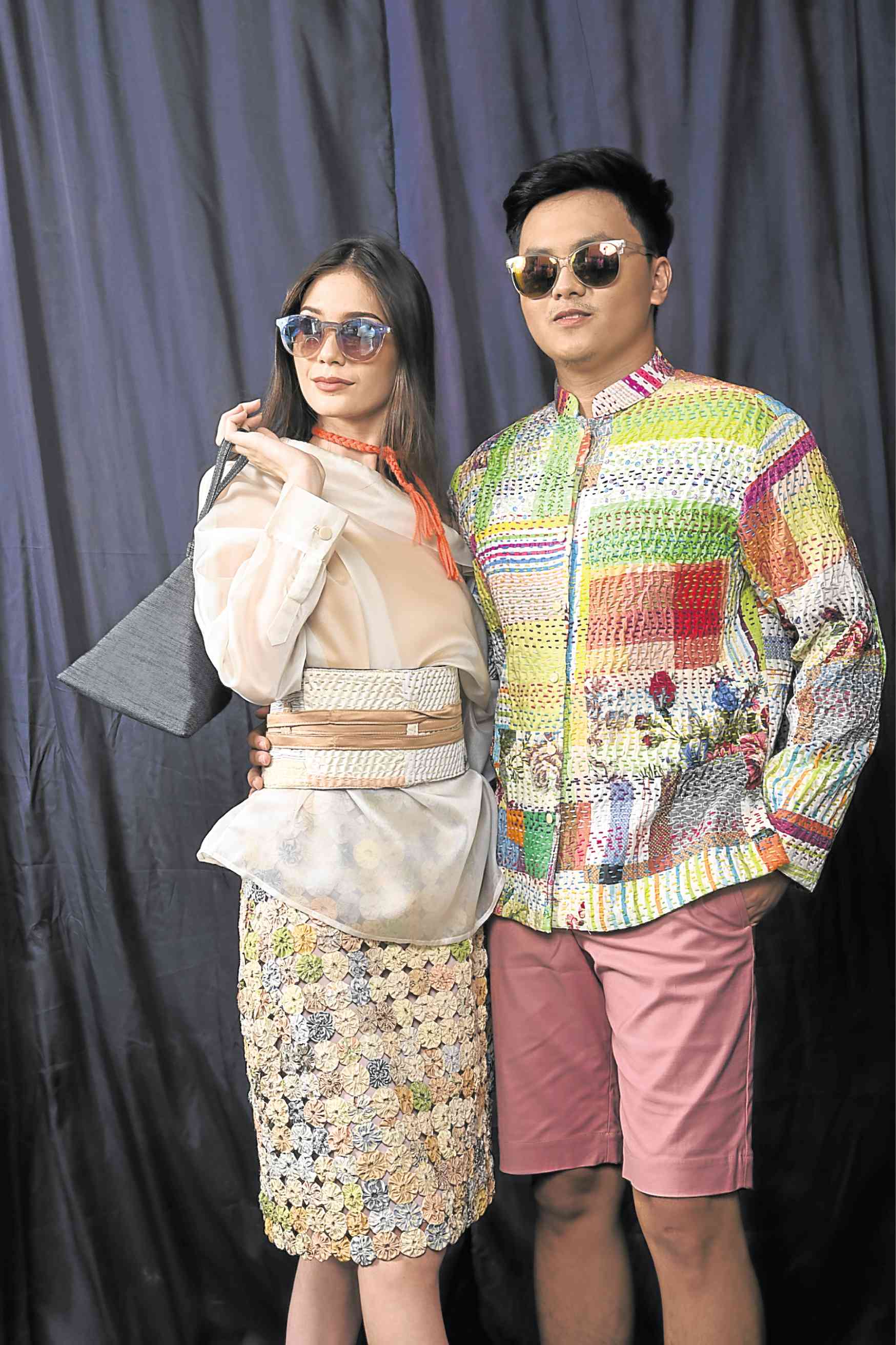 On him: Pidayit blazerwithMao collar made of “retazo”; on her: diaphanous blouse, Japanese-inspired belt and skirt made of doilies

When Philip Torres started designing clothes and accessories using scraps of fabric he collected in his Pret-a-Porter design house in Angeles City, Pampanga, one of the goals he set for himself was to establish a presence in Metro Manila by opening a showroom for his creations.

Today, a strong social media presence has made it unnecessary for Torres to physically bring his pieces to the metropolis. His works are reaching prospective clients not just in different parts of the Philippines, but outside the country, too.

He has even dropped Pret-a-Porter to focus on what is now known as Pidayit—from “pidayit-dayit,” a Kapampangan word that means putting together clothing materials to form a new one. (Five years ago, he called his fledgling fashion as “retazo,” Spanish for “scrap” or “fragment.”)

Torres changed course when he realized he had collected sacks of fabric fragments from Pret-a-Porter’s RTW and custom-made creations. “I decided to create clothes and accessories out of the retazo so they would not go to waste,” Torres says.

His few sample pieces impressed prospective clients. As the demand grew for his retazo pieces, Torres phased out Pret-a-Porter.

At the recent Association of Southeast Asian Nations (Asean) Summit, among the souvenir items given to the wives of the foreign heads of state were Pidayit products. Torres’ patchwork creations were also worn by Bea Zobel, Pampanga Governor Lilia Pineda, several Filipino ambassadors, fellow fashion designers Patis Tesoro and Dita Sandico, Angeles City Mayor Ed Pamintuan and a member of the royal family of Qatar.

If Torres says his creations are one of a kind, he is stating a fact. He cannot completely recreate each piece he makes because of his raw material. The scraps come from different fabrics. And even if they come from a single piece of cloth, the shapes and sizes of the scraps will still make a piece different. But he tries to incorporate the Kapampangan and Filipino cultures in his designs.

Torres’ success is shared by his community’s stay-at-home wives, out-of-school youth and even students. Majority of his workers are women. Students work only on weekends.

Pidayit is presenting fashion shows in Angeles City soon. In May, Torres’ creations will be showcased in New York. —CONTRIBUTED