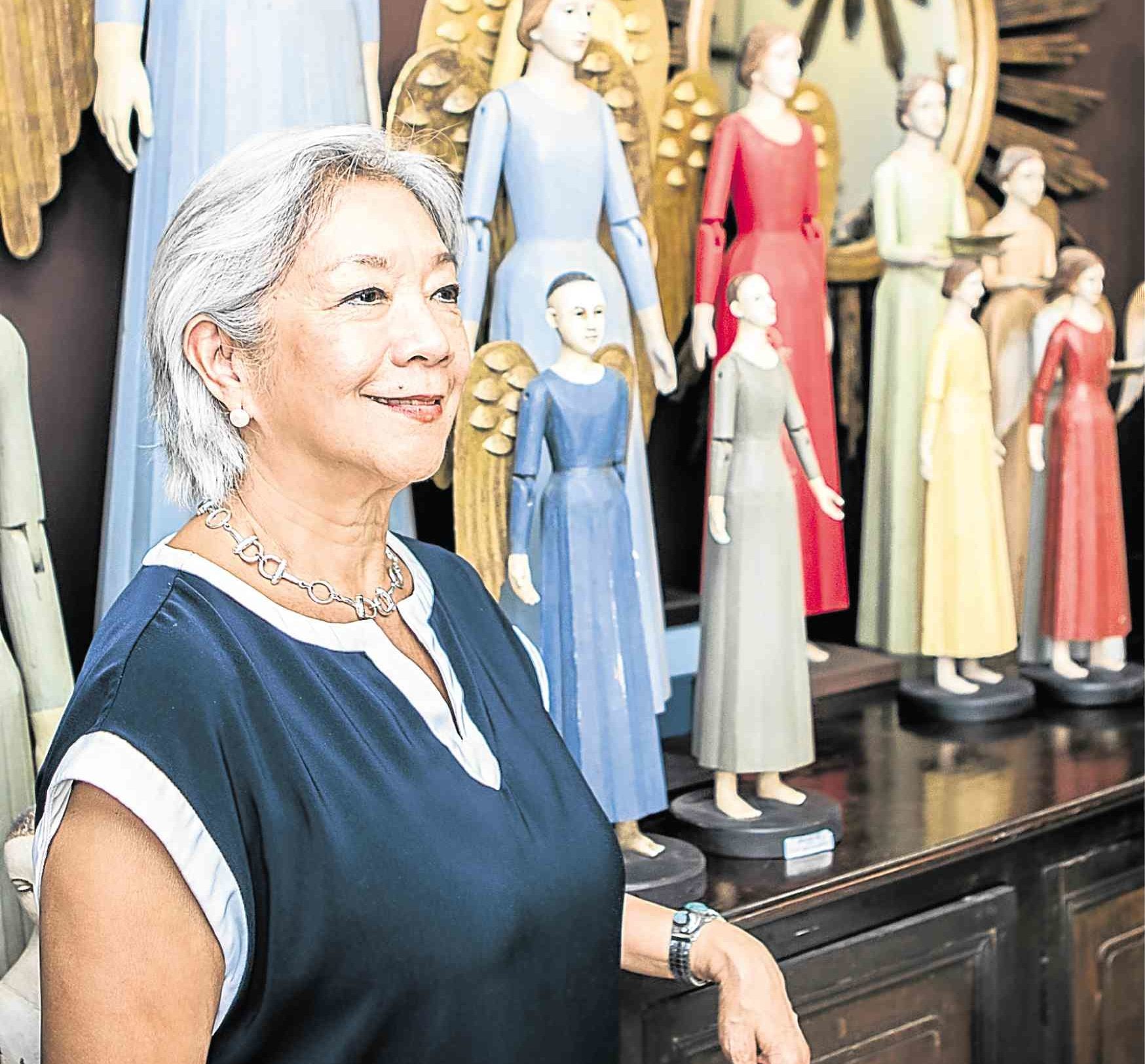 Brimming with a palpable sense of pride and joy, Alice Reyes—National Artist for Dance, founder of Ballet Philippines (BP), Mother of Contemporary Dance, and doting nanay to 3-year-old grandson Nico—reveals a side that would surprise even her closest contemporaries.

“This is my wonderland!” exclaims Reyes, creative director of Chrysara, a sprawling home decor business in Angeles Industrial Park, Pampanga, launched in 1984. Made entirely by hand and primarily for export, Chrysara’s wood, resin and tin wares cover every size, shape, and design imaginable. The showroom features a vast assortment of animals, botanicals, religious icons, fighter planes, automobiles, barbershop poles, jugglers’ pins, and every other object in between—all whimsically rendered with painstaking detail and a vintage aesthetic.

Years before Chrysara, Reyes divided her time serving as artistic director of BP and running The Galleon Shop, a venture she shared with her then husband, Dick Upton. (“Youthful energy,” says the septuagenarian with a laugh when asked how she managed to juggle two very demanding careers.)

In its heyday, The Galleon Shop had nine outlets. It was the first to offer the handwoven abaca fabric t’nalak from Lake Sebu, Southern Cotabato, in its stores, and the first antique shop with a gallery-like display of its goods.

When Reyes and her husband separated and she eventually remarried, she closed The Galleon Shop but retained product development to continue providing jobs for her craftspeople. Named after her children Chris and Sara (“and because I like the word ‘chrysalis,’” she says), Chrysara started as a modest affair in the basement of her Pasay City home with three employees and a product line of duck decoys, floral-shaped baskets, and river stones hand-painted with dog and cat images.

Participating in local and international trade shows helped establish a network of buyers from the US and Europe. Today, Chrysara is a bustling operation with more than 50 full-time employees, 300 artisans and thousands of product designs in its catalogue. The company also sells its goods in Chrysara Nest branches in Pampanga and Mandaluyong City, and through its website www.chrysara.com.

Though she used to join several trade exhibitions, Reyes now prepares for only one—Ambiente, the major consumer goods trade fair in Frankfurt, Germany. The event isn’t until February 2018, but since October last year Reyes has already prepared a setup for Chrysara’s booth.  “When you can plan for something, you do it well,” Reyes says. “Anything last-minute is always rushed, and quality is never assured.”

Not one to follow trends, the creative director and her daughter, Chrysara marketing director Sara Upton, rely instead on equal parts research and gut feel to come up with new collections. “We invest heavily in books and actual samples. Research, research, research,” Reyes stresses. “Or we just see what we like,” the New York-based Upton adds with a chuckle.

Ahead of the curve

After over 30 years in the business, mother and daughter have come to accept that there’s really no way to predict what the market will like. Of the wide selection of items on display, the most popular by far is the Cassidy, a simple framed round mirror available in a variety of colors. Reyes posits that they just might be ahead of the curve: products originally introduced five, 10, even 20 years ago and ready to be discarded will unexpectedly catch a client’s fancy.

“Everything recycles itself and people have different needs and different eyes,” she reflects. “That’s one of the reasons why we’re still alive: there’s always something for somebody.”

Like BP, Chrysara is managed with high standards —and like a dance. “It’s a partnership,” Reyes says of her relationship with her team. “When you have a partner, you have to breathe together, think together, practice together!”

Thus, a product can take up to a year to develop, undergoing numerous revisions before it passes Reyes’ and Upton’s exacting requirements. Because of this, Chrysara’s artisans have mastered numerous finishes—from the delicate  appearance of ivory to the aged look of antiques.

“I’m very proud of our Filipino craftsmen,” says Reyes, who supports them with steady employment and scholarships for their children.

Chrysara has also built a reputation among buyers for its dependability. “When we say we’re going to ship, we ship,” Reyes says. “That’s what frustrates me about the Philippines: we’re always bukas na, bahala na, pwede na ’yan—we have to take those words out of our vocabulary! I don’t like okey lang or basta, they’re so indefinite.

“And in this industry, every single day counts. In Ballet Philippines, I always opened a show on the day we said we were going to open. There are no excuses. And it’s the same with Chrysara.”

Years after shuttling between two worlds, Reyes finds herself doing it again. Back for Ballet Philippines’ 48th season, she has prepared a lineup of classic and contemporary productions for the seasons leading up to BP’s 50th year. “My aim is to have the immediate three seasons leading to the 50th feature our incredible dance and creative artists, and show off the collaborative masterpieces that highlight the uniqueness of Ballet Philippines,” Reyes says. “Plus the next generation of artists that will keep the company jumping happily onto its sixth decade of dance!”

It’s a plan that limits her time in Chrysara to twice-a-week visits. Still,  she always looks forward to each trip.

“This is a very creative area and a very satisfying one,” she says. “It’s very rewarding, and it’s payback for all my blessings.”–CONTRIBUTED